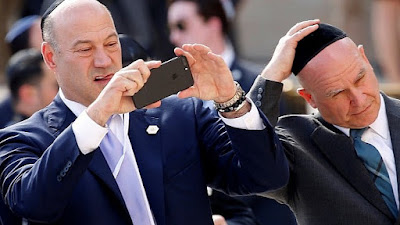 Bannon's job was to make Trump popular with the republican voters.

Gary Cohn's job is to help Goldman Sachs, the Rothschilds and their friends?

Cohn is a registered Democrat, according to Politico, and has donated a substantial amount of money to Democratic candidates.

Bannon is a fervent supporter of extreme right-wing Zionism.

"Among some hard-line, right-wing supporters of the Jewish state, Bannon was perceived as a key ally in the Trump administration and his ouster will be considered a political setback."

After Steve Bannon's Dismissal, pro-Israel Hardliners Lose an Ally in the White House
~~
Posted by Anon at 00:18