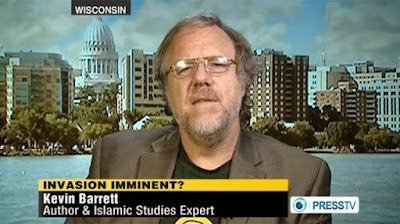 2. Barrett's job has been to promote non-secular Moslem regimes, such as Turkey.

"To the extent the Zio-American mouthpieces are talking about the fall of the ultra-secularist Tunisian regime - until yesterday the last remaining overtly anti-Islamic regime in the Muslim world now that Turkey is being reclaimed by its people - they are nervously reassuring themselves that this is not an Islamist revolution...

"In the long run, Tunisia will be going the way of Turkey - away from forced secularization by a brutal military dictatorship..." 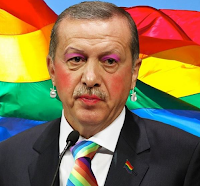 2. "According to the Wisconsin State Journal and the Associated Press, Barrett was arrested in Madison on September 16, 2008, after police said he violated a Sauk County court order forbidding contact with his family.


"He reportedly turned himself in and was released from the Dane County Jail after posting $500 cash bail.

"On September 12, Barrett had been charged with disorderly conduct in Sauk County Circuit Court after being accused of hitting his 13-year-old son at home on the morning of the September 9, 2008, 3rd District Libertarian primary, which he won.

"His wife, Fatna Bellouchi, had obtained a temporary restraining order against Barrett." [47][48]

3. Barrett was born in Madison, Wisconsin in 1959 to Olympic sailor Peter Barrett and University of Wisconsin-Whitewater professor Laurie Barrett.

In the early 1990s, Barrett married a Moroccan-born Muslim woman.

He converted to Islam in 1992, having formerly been a Unitarian. 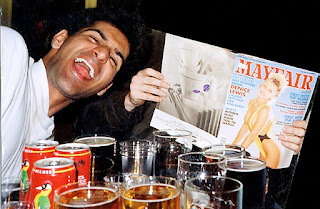 4. The United States State Department gave Kevin Barrett a Fulbright Scholarship in 1999 to study a year in Morocco.

He received a Ph.D. from the University of Wisconsin–Madison in 2004.

He has taught at colleges and universities in the San Francisco Bay area, Paris, and Madison, Wisconsin.

5. Barrett first drew attention to his views by publishing guest op-eds in the Madison Capital Times, in which he alleged that Muslims had nothing to do with the 9 11 attacks.

"It was bad enough when Kevin Barrett published a blog that grossly distorted what I have reported about recent events involving Stew Webb, Jeff Rense and Gordon Duff, where Duff fired Webb while he was on the air with me and Preston James.

"Not long thereafter, he added an Editor's Note trashing an article by Robert O'Dowd, which raised questions about the military operation, JADE HELM.

"And when I spoke up on behalf of O'Dowd and explained why he appeared to be right, I was given the boot, too.

"I subsequently took him to task for his unprofessional and offensive behavior, which included taking down my four most recent and important articles about the Boston bombing..."