...
Transgender people in Sousse in Tunisia, before the CIA and its friends toppled the president and put the Islamists into power.

In Tunisia, in June 2015, a Gladio-style attack murdered 38 people on the beach.

UK tourists complain that travel agents had told them that Sousse was 100% safe and that there was no danger of an INSIDE JOB, FALSE FLAG carried out by the CIA and its friends.

The 'Gladio team' killed 30 British people who had booked their holidays through Tui (Thomson Holidays and First Choice.)

Tui fails to warn tourists about the nuclear waste and other dangerous substances dumped by various mafias in the Amalfi coast and Apulia areas of Italy? 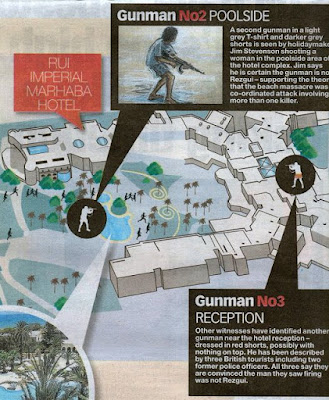 There were several gunmen in the Sousse attack

The patsy in the Sousse attacks was Seifeddine Rezgui, who liked hip-hop music, Real Madrid football club and breakdancing.

Did he mean that the police were told by the CIA and its friends to keep out of the road?

The CIA and its friends control both the generals and the Islamists in Tunisia, reportedly.

In 2011, the CIA and its friends toppled Tunisia's President Ben Ali.

THE CIA WAS INVOLVED IN THE TUNISIA REVOLT

On 23 January 2011, at Voltairenet, Thierry Meyssan had an article on Tunisia entitled:

Meyssan believes the CIA and its friends were inolved in the toppling of Tunisia's president Ben Ali.

Aangirfan believes that the CIA and its friends had been planning for some time to topple Ben Ali.

1. Washington decided to organise the rebels.

2. Washington decided to use the media in Tunisia and abroad to control the direction of the revolt.

Washington got the media to focus attention on social issues, the corruption of Ben Ali, and censorship of the press.

Washington wanted to avoid any mention of Tunisia being used as base for NATO and the CIA.

3. On 30 December, the private channel TV Nessma spread reports about the riots and organised a debate about the transition to democracy.

4. At the same time, US agents (as well as Serbs and Germans) were sent to Tunisia to run the insurgency.

These experts provided the rioters with their slogans.

These experts followed the tactics for a 'colour revolution' developed by the Albert Einstein Institution.

6. On 13 January the Chief of Staff of the Army, General Rashid Ammar, was contacted by the commander of AFRICOM, General William Ward.

The term "Jasmine Revolution" was used by the CIA to communicate during the coup of 1987 which placed Ben Ali in power.

9. We forget the good report given by the IMF managing director Dominique Strauss-Kahn.

And we forget the latest report of Transparency International which said that Tunisia was less corrupt than the states of the European Union such as Italy, Romania and Greece.

10. Ahmed Najib Chebbi, a pawn of the National Endowment for Democracy, has become Minister of Regional Development.

11. Amanou Slim, a blogger using the methods of the Albert Einstein Institute, has become Secretary of State for Youth and Sports.

12. The real seat of power is no longer at the Palace of the Republic, but at the Embassy of the United States.

Located outside of Tunis, in a vast campus, the embassy is a huge bunker that houses the highly secure central stations for the CIA and the MEPI North Africa and part of the Levant.

The following is our timeline:

2003 - Ben Ali refused to take part in either of the two wars against Iraq.
2009 - Tunisia signed an economic and technical cooperation pact with China
2009 - Sakhr El Materi, chairman of the Tunisia-US Parliamentary Friendship Group, met the US ambassador at Materi's home (Tunisia: Dinner With Sakher El Materi - TuniLeaks) "The Ambassador raised economic liberalization, noting the importance of opening up to franchising."

2010 - A report (Transformation: Tunisia) notes: "Despite the formal abolition of trade barriers for industrial goods with the European Union as of 1 January 2008, in practice, Tunisia has seen too little progress in terms of trade liberalization."
May 2010 - General William E. Ward, commander of U.S. Africa Command, visited Tunisia and met Tunisian Minister of Defense Ridha Grira.
"Minister Grira had recently returned from very positive talks in Washington with Secretary of Defense Robert Gates." (Tunisia - U.S. Africa Command Blog)
October 2010 - Sakhr El Materi, chairman of the Tunisia-US Parliamentary Friendship Group, had talks with top Americans in the Pentagon and the State Department.

November 2010 - A cable from the US embassy in Tunis released by wikileaks describes Tunisia's President Zine El Abidine Ben Ali's family entourage as a "quasi Mafia" because of its "organized corruption".

17 December - Mohamed Bouazizi, a 26-year-old university graduate, reportedly set himself alight in the central Tunisian town of Sidi Bouzid in a protest over unemployment.

He reportedly died on January 5 from burn wounds.

In Islam, suicide is considered a sin.

There have been rumours that Mohamed Bouazizi is still alive s

24 December 2010 - an important Washington think tank (Institute for Policy Studiesa) had an article about a possible change of regime in Tunisia (Foreign Policy In Focus.):
"It would do Tunisians, even (Tunisian President) Ben Ali, well to recall how many US allies different American administrations have discarded…"

7 January 2011 - the Council on Foreign Relations's Elliott Abrams (Elliott Abrams: Is Tunisia Next?) seems to suggest that the fall of Ben Ali would be a good thing.
"Tunisians are clearly sick of looking at all the giant photos and paintings of Ben Ali that appear on walls, posters, and billboards all over the country...

"If Tunisia can move toward democracy, Algerians and Egyptians and even Libyans will wonder why they cannot."

Mysterious rooftop snipers are at work.

13 January - The army withdraws from Tunis, which remains occupied by special forces.The leaders of the North African branch of Al-Qaeda/the CIA call for the overthrow of Ben Ali.14 January - Ben Ali leaves the country.

Jul 2, 2015 - The wife of former President Ben Ali of Tunisia worked for Mossad, according to Ben Ali's former bodyguard. Equality and Reconciliation / ...

Aangirfan: MOSSAD IN THE MEDIA AND IN TUNISIA

Jun 30, 2015 - Tunisia hotel attack. "Seifeddine ... was shot dead by security forces on the beach in Sousse, according to the Daily Mail. "New images of the ...

Oct 2, 2011 - "Two gunmen who fired shots outside the headquarters of Tunisia's PDP opposition party in the center of the capital on Sunday had Swedish ...

aangirfan: WHAT REALLY HAPPENED - IN TUNISIA AND EGYPT

Jun 12, 2012 - The killings in Egypt and Tunisia, during the Arab Spring, were primarily the work of assets of the CIA. On 7 June, the Financial Times quotes an ...

aangirfan: THE CIA WAS INVOLVED IN THE TUNISIA REVOLT ...


Jul 2, 2015 - Sousse is like Naples. Both have 'no go' areas. When I attempted to enter a part of Soussewhich reminded me of Acera in Naples, a plain ...

Aangirfan: NATO AND THE SOUSSE ATTACK


Jul 7, 2015 - 'Mr. President, the Gladio system has operated for four decades under various names. It has operated clandestinely, and we are entitled to ...

aangirfan: TERROR IN TUNISIA AS US SEEKS BASE


Nov 1, 2013 - On 30 October 2013, a man blew himself up outside the Riadh Palm hotel in Sousse. Attack on Hotel in Sousse, Attack in Monastir Tunisia Live