Reportedly, Ellen Rometsch had affairs with both J F Kennedy and Gerald Ford.

Ellen Rometsch was born in Kleinitz, in what became East Germany.

In 1955 Rometsch fled to West Germany.

Her second marriage was to Rolf Rometsch, a sergeant in the West German air force.

In 1961 she arrived in the USA with Rolf who was part of West Germany's military mission in Washington.

Most likely, Rolf was a spy. 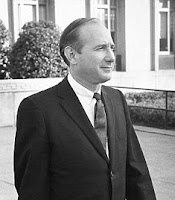 Ellen became a regular visitor to the Quorum Club which had been set up by Bobby Baker to entertain senators, congressmen and lobbyists.

In 1961 Bill Thompson, a close friend of JFK, asked Baker to arrange a meeting between Ellen and JFK.

Baker said that: "He (Kennedy) sent back word it was the best time he ever had in his life. That was not the only time. She saw him on other occasions. It went on for a while."

J. Edgar Hoover's FBI came to the conclusion that Romesch was probably a Soviet spy.

Hoover leaked information to a journalist that Romesch worked for Walter Ulbricht, the communist leader of East Germany.

The FBI took an interest in several women at the Quorum Club who had been involved in relationships JFK and Robert Kennedy.

These included Mariella Novotny and Suzy Chang, who had connections to communist countries, and who had been part of the spy ring that had trapped John Profumo, the British war minister.

There is a suspicion that the spy ring that trapped Profumo had links to some 'deep state' which had influence within all the top spy agencies, including MI6, Mossad and the CIA.

This 'deep state' could be described as 'Mafia, Feudal, Fascist and Zionist'.

Hoover leaked information to Clark Mollenhoff who wrote an article in The Des Moines Register about Rometsch having links to top people.

Robert Kennedy sent La Verne Duffy to West Germany where he bribed Rometsch and got her to sign a statement "denying intimacies with important people."

Bobby Baker, the former aide to LBJ, has revealed how 'Washington was full of drunk, philandering politicians' who took thousands of dollars in bribes.

Baker says of Rometsch: "She really loved oral sex... She went to the White House several times. And President Kennedy called me and said it’s the best head-job he’d ever had, and he thanked me."

Ford's relationship with Rometsch 'took place during his time on the Warren Commission'.

According to Baker: "So, (Hoover) had this tape where Jerry Ford was having oral sex with Ellen Rometsch. You know, his wife had a serious drug problem back then… Hoover blackmailed… Ford to tell him what they were doing."

According to Baker: Senator Estes Kefauver from Tennessee was in charge of a hearing about high school delinquency.

According to Baker: Kefauver preyed on the youngsters who testified.

According to Baker: "(Kefauver) got some of these young kids testifying, you know, before his Juvenile Committee or something and then he couldn’t wait to go to bed with them."

According to Baker: votes in the Senate could be bought and towns could be bribed when it came to national elections.