The Swiss psychiatrist Carl Jung was the son of a Protestant pastor.

Carl Jung's mother spent a considerable amount of time in her bedroom, where she said that spirits visited her at night.[3]

"As a boy I was the victim of a sexual assault by a man I once worshipped."

While married to Emma Rauschenbach, Carl Jung had a relationship with a Jewish girl called Sabina Spielrein, who was one of his patients.

Jung found that Spielrein's mental illness was triggered by the sexual arousal she felt as a child when she was spanked naked by her father. 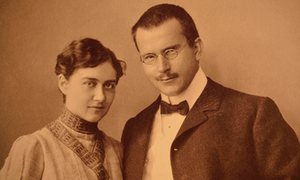 In 1899, 17-year-old Emma Rauschenbach, one of Switzerland's wealthiest heiresses, fell in love with Carl Jung, 'a penniless doctor with a peasant background.'

After Carl married Emma, Carl had affairs with a number of women, including Toni Wolff.

Carl's sexual relationship with Wolff was tolerated by Emma.

Emma and her husband Carl Jung 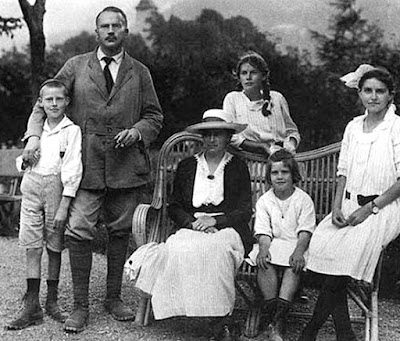 Carl Jung had a crush on Sigmund Freud.

Jung wrote to Freud as follows:

"My veneration for you has something of the character of a ‘religious' crush.

"This abominable feeling comes from the fact that as a boy I was the victim of a sexual assault by a man I once worshipped (as Jung now worshiped Freud)..."

Jung fell out with Freud.

"I find it uncontroversial to assert - just as Jung and Freud did themselves - that homosexual feelings played a role in derailing their collaboration...

"'Unruly' homosexual feelings, as Freud put it, were at the core of the conflict.

In 1913, at the age of thirty-eight, Jung experienced a horrible "confrontation with the unconscious".

He saw visions and heard voices.

He made notes. Jung began to transcribe his notes into a large red leather-bound book, on which he worked intermittently for sixteen years.[6]

"The Red Book tells the story of Jung trying to face down his own demons as they emerged from the shadows...

"In it, Jung travels the land of the dead, falls in love with a woman he later realizes is his sister, gets squeezed by a giant serpent and, in one terrifying moment, eats the liver of a little child...

"At one point, even the devil criticizes Jung as hateful." 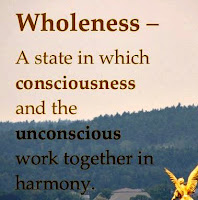 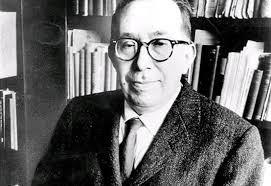 
15 Jan 2014 - "And there will be error. If you avoid error you do not live." The Psychotherapist & Self Acceptance. According to the Swiss psychiatrist Carl Jung ...


13 Jan 2013 - There is the 'noble Quaker' Nixon and the 'lying murderous' Nixon. Carl Jung wrote about 'archetypes' or personalities. "Jung believed that ...