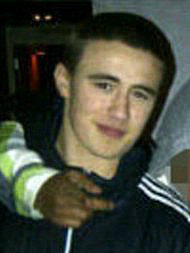 In Germany at the weekend thousands of Russians protested across the country because of reports from Russia that a thirteen year old Russian girl had been raped for thirty hours by a gang of migrants in Berlin.

The Berlin police initially denied that anything had happened and the German media ridiculed the Russians. Now Foreign Minister Lavrov has protested and the Berlin police claim that the thirteen year old girl had consensual sex.

This fits in perfectly with the description of the British police looking the other way in oxford and elsewhere.

The only thing that matters to 'Western' politicians:

The following article includes a photo of some of the seven hundred Russian protesters in Berlin on January 23rd. There were other protests by Russians across Germany.

The Russians are demanding justice. The Berlin police still claim that the 13 year old girl had consensual sex with two men who have now been arrested for sex with a minor.

The girl was reported missing for thirty hours and the police claim that her account of what happened included contradictions, which is hardly surprising if she really was abused for so long.

This Scholarly Library of Facts about Domestic & Worldwide Zionist Criminality

These Christians are but a few of the 100,000,000 Christian innocents who were exterminated by the Anti-Christian Jewish Red Commissars in Russia under the orders of Trotsky, the Jewish Commissar of Commissars. Yet Spielberg will never Direct a "Schindler's List" Movie for them or their genocide. Why is that? Because Jews did it.

My relatives and my fellow Christians were murdered in the USSR under Jewish Marxism between 1917-1945, and many of the Marxists came to Russia from New York to do this to Christians in 1917 after Jacob Schiff, the Jewish anti-Christian maniac banker who owned The Guaranty National Trust, the largest bank in the United States, financed Lenin and Trotsky $35 million for the Red Revolution and the mass killing of these Christian souls. We must never forget this.ReplyDelete

A young Swedish woman employed at an asylum centre has died following an attack by a migrant at the centre, the Swedish news agency TT has reported.

The victim, 22 year-old Alexandra Mezher, was rushed to a nearby hospital after being stabbed repeatedly, but later died.

Swedish police have refused to comment on the identity of the man whois suspected of murdered her but have stated that he is under arrest and will be charged with murder or manslaughter and that he was a resident of the centre. The centre in Mölndal is primarily for unaccompanied minors aged 14-17.

The motive for the attack remains unknown and police have not commented to media extensively about the case. Police spokesman Christer Fuxborg did tell Swedish newspaper Aftonbladet, “the woman who was taken to Sahlgrenska Hospital this morning died because of the injuries she received in connection with the altercation, relatives are informed.”

Miss Mezher’s cousin described her as “an angel.” She told Swedish media: “It is so terrible. She was a person who wanted to do good, who wanted to be good.

“And then he murdered her when she was doing her job. We have cried a lot. She was such a nice person, warm and happy.

She added: “It is the Swedish politicians’ fault that she is dead.”

The constant violence, physical and often sexual, is a growing epidemic in asylum centres across Europe. Violence is often directed to Christians, LGBT people and female asylum centre workers often bear the brunt of sexual violence in the centres.

In Germany the violence toward LGBT people has grown so out of control that the city of Berlin has built special asylum centres just for them. The Lesbian and Gay association of Berlin-Brandenburg had at least 95 accusations of violence toward homosexual and transsexual refugees in the Berlin area from August to December of 2015 which occurred mostly in asylum centres.

Christians are another group that has been singled out by Muslim migrants for violence, leading an Orthodox Christian priest, Hegumen Daniil, to comment, “Christian Refugees from Syria, Eritrea, and other countries are exposed to humiliation, manhunt and brutal harassment at the camps for refugees by Muslim neighbours.”

The sexual crimes of migrants made world headlines in the wake of the Cologne New Year’s attacks at the Cologne train station, but the frequency and severity of sex attacks within migrant camps is also a growing concern. A worker in a camp in Hamburg spoke out about the violence saying that at least 90 percent of the migrants were “unpleasant.”

The social worker went on to talk about how the migrants view women saying, “they simply do not respect women at all,” and described how she had to dress more modestly to escape the sexual harassment from the migrants and even avoid, “going where lots of these single men are staying.”

While there is a continuing trend of violence within the asylum centres, the murder of this young woman in Sweden might mark the first instance of a worker being killed by migrants.

Swedish police are currently being quiet about the case, which comes at a time they are under incredible pressure due to a report that accused police, government and media of covering up migrant crimes for years.

Man Purchases ISIS Sex Slaves, But What He Does Next Will Make You Weep Tears Of Joy!
One Iraqi man is garnering attention for purchasing many of the ISIS sex slaves whenever he can. However, what he does to them will truly make anyone with an emotional heart weep tears of joy. The Iraqi man purchases the ISIS sex slaves with the intent to reunite them with their families.

www.belfasttelegraph.co.uk/news/politics/westminsters-dark-secretabuse-of-children-adultery-homosexuality-and-sadomasochism-were-all-seemingly-lumped-together-30417218.
Posted by Anon at 23:02