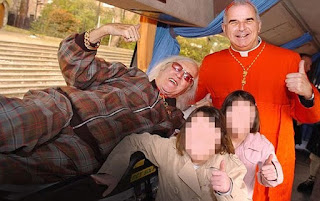 The Catholic Church in Scotland has been deeply involved in child abuse.


"When I was eight years old I was regularly locked in a darkened room by the nun who was my carer and told I was being punished because no-one loved me.

"The same nun sexually abused me."

"I was still only eight years old."

In 2007, an independent report for the Scottish government found that there has been massive child abuse in Scottish care homes, both Catholic and non Catholic.

(‘These are the voices that need to be heard’) :
"When she was nine - or thereabouts - she (Elizabeth McWilliams) was raped by the man Quarriers called her house father. 'He took his chance,' she said matter-of-factly.
"Some children complained of abuse.
"That had consequences. 'Boys,' she said. 'Well, they were hung up on door hangers and their penises tied to doorhandles.'"
Quarriers Homes is a Christian community.

Helen Holland was sent to Nazareth House in Kilmarnock, a children's home run by nuns.
At Nazareth House, Helen was raped by a priest.
"When she was eight, a nun pulled a hood over her head to help a priest rape her. The sexual abuse went on for three years until, aged 11, she fell pregnant. The same nun kicked her in the stomach until she miscarried."
She was 'beaten to a pulp' by a nun.
There was abuse at many other homes

Idols
At St Ninians: "In 2003 Michael Murphy, 69, formerly known as Brother Benedict, a monk with the de la Salle order, was jailed for two years on ten charges of physical abuse during the 1960s, including torturing pupils with an electric shock device, force-feeding them vomit and whipping them with knotted boot laces."

Photo from: www.missingpersons-ireland.
Thomas Wall, an orphan from Limerick in Ireland, was aged three when he was sent by the criminal courts to a Christian Brothers run reform school.
He says: "From eight years of age I was sexually abused by a Christian brother at Glin."

The BBC, on 20 May 2009, tells us about Child abuse victims in Ireland who are now seeking justice.

BBC correspondent Shane Harrison has spoken to three people abused at schools run by the Catholic Church in the Republic of Ireland.
Thomas Wall says: "If they took a liking to a person then you became a danger, then you became a target. And there was no way of avoiding it... I mean they had access to you 24 hours a day...
"I will carry a scar on my forehead which I got from a Brother in the classroom. Got my head banged off the desk.
"It spouted blood and I went to the infirmary block, met the Superior, who was also a brother who was over the institution.
"I was questioned about what had happened to upset the Brother to this standard and I told him that I had done absolutely nothing and he did absolutely nothing about it."

Joseph's religious order Tralee , "a catalogue of cruelty and some say , even murder." ( http://www.missingpersons-ireland./)
Tom Hayes, another Limerick orphan, says: "It was common during the night to be woken by individuals interfering with you sexually...
"When you informed the Christian Brothers yourself you were beaten up as a result of it and threatened by the very people, such as the monitors and such people, who perpetrated these acts."
Sadie O'Meara, a Tipperary girl, says she never found out why she ended up in an institution run by the Sisters of Charity.
She says: "You'd be up at 6am and you had to go to two Masses.
"Your cell door was locked every night when you went in and you had a bucket and an iron bed and you couldn't look out the window. It was all bars.
"The food was absolutely brutal. And my mam died but they never told me she died. She died on Christmas Day but they never told me.
"I didn't know that until they let me out four years later. That's something that really upsets me."
Thousands beaten, raped in Irish reform schools / Abuse of Children in Irish Institutions Was 'Endemic'

Alof de Wignacourt, a Grand Master of the Knights of Malta, with a young friend.

The Knights of Malta are important.

They are a Catholic order.

Reportedly they are linked to freemasonry

William Casey, Director of the CIA 1981-87. Hours before he was due to testify before Congress about Iran-Contra, he was rushed off to hospital and soon died.

Motherjones, in 1983, had an article entitled 'Their Will Be Done'

This article told us about the CIA and the Vatican.

A lot of important people have been Knights of Malta, members the Sovereign Military Order of Malta (SMOM)

Gehlen worked for Hitler and then the CIA.

In 1948, the Knights of Malta gave one of its highest awards to General Reinhard Gehlen, Adolf Hitler's chief anti-Soviet spy.

Gehlen's Nazi spy network joined up with the CIA after World War II.

The Knights of Malta gave an award to James Jesus Angleton of the CIA.

According to State Department documents, Angleton decided to give money to an organisation called Catholic Action and use it to help the right-wing win elections in Italy.

The USA has its Knights of Malta, some of whom have used their influence to promote right-wing causes in South America.

During the 1950s and the early 1960s, the main link between the U.S. and the Vatican was Cardinal Spellman, a supporter of U. S. military involvement in Vietnam.

In the early 1960s, Pope John XXIII began to liberalize the church and talk to the communists.

In 1963, John McCone, who was director of the CIA and a Knight of Malta, took an interest in what was happening.

During World War II, Montini had passed information to the OSS, which became the CIA.

However, Pope Paul VI appointed 'socially conscious' bishops and opposed South American military dictatorships. This may have been calculated to stop the spread of support for people like Cuba's Castro.

In 1977, the CIA had its eye on the Polish Cardinal Karol Wojtyla of Krakow, an anti-communist figure. Cardinal Cooke, a Knight of Malta, met Wojtyla for a long chat in 1977.

John Paul I became Pope but died after a month in office. There was a strong belief that he had been murdered.

In Argentina, in the 1970s, while Paul VI was Pope, Father Patrick Rice was subjected to water torture by agents of the Argentinian government.

During a period of 15 years, 1,500 priests, nuns and bishops were murdered, imprisoned, tortured or expelled from Latin America.

According to father Rice, "Any Christian who defends the poor can expect to be persecuted and mistreated by the security police."

In 1968 a meeting of South American bishops had called upon the church to defend the rights of the oppressed and the poor.

In 1980, in El Salvador, Bishop Oscar Romero was assassinated by a fascist group headed by major Roberto D'Aubuisson, who has been linked to the CIA. John Paul II, from Poland, was pope at the time.

Maura Clarke, Ita Ford and Dorothy Kazel were American Nuns murdered by fascists in El Salvador in 1980. John Paul II, from Poland, was pope at the time.

Penny Lernoux, in her book 'Cry of the People', relates how the CIA used right-wing Catholic organizations in Latin America to attack reformers.

The CIA trained and financed the fascists.

In 1975, the Bolivian Interior Ministry, closely linked to the CIA, set up the "Banzer Plan, which was adopted by ten Latin American governments. This plan aimed to destabilize and defeat priests who supported the poor.

The Catholic Church's Opus Dei attacked those who supported the poor.

John Roche, a professor at Oxford University in England, broke his oath of secrecy after leaving the Opus Dei. Roche described Opus Dei as "totalitarian" and "fascist".
In the latter days of the fascist Franco regime, ten out of 19 cabinet officers belonged to or were closely allied with Opus Dei.


In Chile, Opus Dei sought support from Chilean bishops for the overthrow of President Salvador Allende. In Chile, Opus Dei worked closely with CIA-funded groups which later merged with the Chilean secret police.

Lopez Trujillo was a Colombian sympathizer with Opus Dei and an opponent of liberation theology.

One of Lopez Trujillo's closest aides was Roger Vekemans, a Belgian priest. Vekemans received around $5 million from the CIA in the 1960s, and this was given to right-wing organizations in Chile.

Walters played an important role in organizing the CIA-backed Nicaraguan exile groups based in Honduras who were seeking to overthrow the Sandinista government.

Soon after Walters had visited John Paul II, the pope demanded that five priests in the Nicaraguan government resign from office.

In 1983, John Paul II visited Nicaragua and appeared to condemn the Sandanistas, thus appearing to support the fascists.

Pope Benedict XVI (Ratzinger) was a member of the Hitler Youth movement and did wartime service with a German army anti-aircraft unit.

Adolf Hitler was a Roman Catholic.
Posted by Anon at 10:33