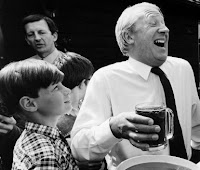 In 2010, 40-year-old Nicholas Edgar "killed himself" near his parents' Cambridgeshire estate.

He had been questioned by the police in connection with child abuse images.

Nick Edgar was Edward Heath's Private Secretary in the 1990s.

He started working with Heath in 1992 when he was in his early 20s.

He worked as his Private Secretary for several years, spending months at Heath's Wiltshire home.