According to the former bodyguard:

1. Leila Trabelsi was involved in the assassinations of Palestinian leaders in the early 1990's.

2. Former Tunisian Minister of Interior Mohamed Ali Mahjoubi was unfairly arrested for being an agent of Mossad.

Of course, the former bodyguard could be a disinformation agent.

Tunisia's Ahmed Bennour (above) is a former Governor of Sousse.

Allegedly he has worked for Mossad.

Ahmed Bennour has pointed out that it is not he who works for Mossad but a number of other top Tunisian officials. 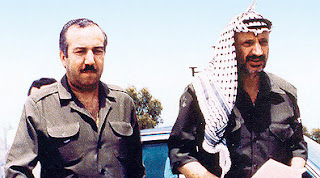 "Who delivered the plans of Abu Jihad's villa to the Mossad, who cut the telephone lines near the Presidential Palace, who proceeded to empty Sidi Bou Said of every living soul on the night of his assassination, following extensive police raids?

"All these factors combined enabled the Mossad squad to perpetrate their cowardly assassination of Abu Jihad leader undisturbed.

"According to a survey published by the Maariv newspaper, the Mossad squad benefited from the complicity of some senior Tunisian officials at the time."

1. Ahmad Bannour organized the bombing of the Fatah headquarters in Tunis on 1 October 1985.

2. He helped organise the  assassination of Hamas leader Mahmoud Mabhouh in Dubai on 20 January 2010.

A reconnoitering team in Dubai was led by Ahmad Bannour.

3. He fled from Tunisia to France when Ben Ali became president because his spying for Mossad had been discovered.

4. He runs a company in France which acts as a cover for Mossad. 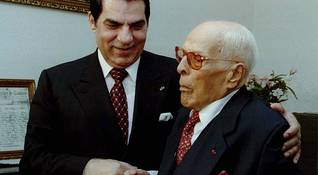 Ahmad Bannour has pointed out that at the time of the bombing of the Fatah headquarters in Tunis, he was ambassador in Rome and Ben Ali was in charge of security in Tunis.

Ben Ali assumed the Presidency on 7 November 1987 in a bloodless coup d'état that ousted President Habib Bourguiba, who was declared incompetent.[1]

"Cooperation between the Tunisian government and the Israeli secret service exists, but it didn’t start until what is shamefully called the "new era", that is after the November 1987 coup.

"During this period, an Israeli interest office was set up in Tunis.

"Since then, political, security, economic, trade and finance relations have continued to flourish and strengthen in the greatest secrecy and hidden from the view of public opinion, both Tunisian and Arab." In a new book, Leila Ben Ali, wife of the toppled Tunisian president, says that her husband was the victim of plot  by top Tunisian security officials and by the West - not a revolution.Leila Ben Ali says that the Tunisian uprising was a coup d'etat organised by army and security officers with western help.


Leila describes how the coup was caused by the "indoctrination of the masses, the distribution of money in poor areas, the recruitment of snipers, the intensification of protests through targeted killings, and the torching of homes."

She reports that there were an "unusual number of internships" given to young Tunisians in western countries in the months before the revolt.

She claims that President Ben Ali's flight from Tunis in January 2011 was a trick organised by Ali Seriati, the head of presidential security.

She says that her husband was not aware that the flight was going to lead to permanent exile in Saudi Arabia.

Ben Ali took the flight after being informed of a planned assassination attempt.

Leila admits that some members of her extended family were rather greedy, and let the president down.

Leila points out that the former French president, Nicolas Sarkozy, was treated very generously by president Ben Ali, and yet the French were the main people behind the coup.

Jun 2012 - A study conducted by the International Labor Organization declares that the Arab Spring has not helped Arab youth in terms of jobs.

The number of unemployed youth, especially university graduates, has risen.

Youth unemployment is now nearly 30% in both Egypt and Tunisia.

Ben Ali made Tunisia the most successful country in Africa, but he was not cooperating fully with the USA.

Tunisia supported neither the 1991 Gulf War nor the 2003 invasion of Iraq.

Ben Ali in Tunisia had to be demonised and toppled.

Ben Ali was popular, until there began a campaign of demonisation. (We have been to Tunisia).

1. In September 2010, Tunisia ratified the international treaty banning cluster munitions, becoming the first country in the Middle East and North Africa to do so.

2. The 2010 Corruption Perception Index was released by Transparency International on 26 October 2010.

The report shows that Tunisia was the least corrupt country in North Africa.
(2010 Transparency International Index: Tunisia most transparent ...)

August 2010: The 2010 report of the Oxford Business Group on Tunisia referred to the stability and social peace prevailing in Tunisia.

4. September 2010: Tunisia held the top rank in Africa (and the 32nd world position out of 139 countries) of the most competitive world economies, according to the report on world competitiveness 2010-2011 published by the World economic forum of Davos.

Starving ragged tools of the CIA?

6. August 2010: US "Newsweek" magazine ranked Tunisia first in Africa in its "100 best countries in the world'' ratings based on social, economic and political data. Tunisia's ratings in 2010.

7. 2010: The report on human development published by the UNDP ranked Tunisia 7th out of 135 countries in terms of 'long-term development indicators'. Tunisia's ratings in 2010.

8. September 2010: Tunisia was ranked first in the Arab region and 6th in the world as regards the access of handicapped people to ICTs, according to ratings announced in Vilnius (Lithuania) by the United Nations at the 5th forum on the governance of the Internet (IGF 2010). Tunisia's ratings in 2010.

We are being lied to about Leila (above)

Leila Ben Ali founded the Basma Association in 2000 to help secure employment for the disabled, and 'has chaired the organization ever since'.

Under her leadership the association has provided micro-financeloans, secured employment for many and opened a center for the disabled in October 2010.[5]

The center provides technical training in a number of fields including computer science, embroidery, carpentry, theater and music.[6]

The First Lady also started SAIDA, an initiative to improve cancer treatment, in 2010.

Mrs. Ben Ali was active in S.O.S. Gammarth and El Karama, which provide care for orphans and promote and protect human rights, respectively.[7][8]

The first lady has also made domestic violence prevention a major priority of the AWO, and has called for greater public attention and reporting of violence against women in the home.[9]

In a recent interview in Trends Magazine, the First Lady asserted the importance of Arab women in sustainable development and bettering the Arab women’s image were her main objectives as president of the AWO.[6]

The first lady has been recognized for her contributions to these organizations in a variety of publications.

In 2000, she was selected as the "World Family Personality" and in 2003 deemed "Person of the Year" in the Russian magazine The World of the Woman, for her activities to promote social welfare and women's rights.

More recently, the first lady was chosen as one of the world's 50 most influential Arabs by Middle East Magazine, a publication based in London.[10]

She has been commended for her work with the AWO to increase women's capacity in all fields and positions, and for increasing cooperation among Arab states on women's issues.[9]

The first lady has also been recognized by the World Association of Women Entrepreneurs (FCEM) for her role in empowering women in economic development.[11]

According to Google: not many people have read: TUNISIA R.I.P. - THE CIA'S JASMINE REVOLUTION

Who were the mysterious snipers on rooftops who shot civilians and helped stir up discontent?

On 16 January 2011, it was reported that Tunisia TV said four people had been arrested with German passports
"Tunisian police arrested four people carrying German passports over a shooting incident near the headquarters of an opposition party in the capital on Sunday, state television said, quoting a security source.

And, Gunmen held in Tunis had Swedish passports: police

"Two gunmen who fired shots outside the headquarters of Tunisia's PDP opposition party in the center of the capital on Sunday had Swedish passports, Tunisian police said...

"Earlier an opposition party statement said police and military stopped a carload of armed men, who it described as foreigners, after which shots were fired...

"The gunmen were driving two taxis with their weapons hidden inside camera bags, he said."

On 17 January 2011, it was reported that a party of Swedish 'tourists' was attacked after being caught up in the ongoing violence in Tunisia.

They were in the country 'on a hunting holiday' - with weapons in the back of their vehicle. (Swedish tourists attacked in Tunisia unrest)

"This complicated mission was orchestrated by a number of Israeli authorities, including the foreign ministry.

"The tourists were first transferred ... to Germany and from there to Tel Aviv...

"In 2000, Tunisia decided to sever its relations and to close the Tunisian interest office in Tel Aviv and the Israeli Interest Office in Tunis...

"Netanyahu said the unrest in Tunisia illustrates the widespread instability plaguing the region and shows why Israel must be cautious as it pursues peace with the Palestinians."

When there were riots in Jakarta in May 1998, the military were mysteriously absent.

It is believed that the key general, Prabowo, was close to the CIA and Pentagon.

In Tunisia, the army were mysteriously absent for much of the time.