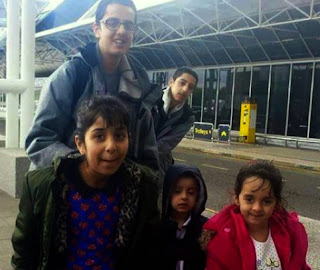 'Recruits for ISIS' at the UK airport.

The UK police are involved in recruiting UK Moslems to go and fight for ISIS, reportedly.

Mohammed Shoaib and Akhtar Iqbal say that the British police 'actively encouraged and promoted' the radicalisation of their women who recently left the UK with their nine children to join ISIS fighters in Syria.

"Plainly the North East Counter-Terrorism Unit (Nectu) has been complicit in the grooming and radicalising of the women."

The women have a relative in Syria who has been working for ISIS, which is believed to be run by the CIA and its friends.

The men say that the police encouraged the women to contact their radicalised brother in Syria.
Lawyers for Mohammed Shoaib, 39, and Akhtar Iqbal, 48, have written to the Home and Foreign Secretaries, and to the chairman of the Home Affairs Committee, Keith Vaz.