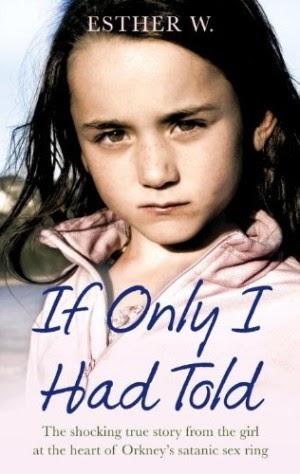 Esther Willsher (above) has revealed that she was sexually abused as a child.

In 1986, shortly after arriving in Orkney, the father in the Willsher family was imprisoned for sexually abusing his children.

"Esther's father was imprisoned for offences against his 15 children.

"He attacked them with weapons, kicked them with steel-capped boots, stuffed nettles inside their underwear and sexually abused the eight girls."

The Rev. Morris McKenzie and his wife Jan were among 'a close-knit group of South Ronaldsay islanders' who sent letters, postcards, and gifts to eight children from the Willsher family.

According to former Orkney social worker Mrs Sue Millar, the correspondence contained coded messages linked to allegations by three of the children of an organised child sex abuse network.

Constant references were made to love hearts, Brownies, and the Boys' Brigade, and a middle-aged woman Mrs T referred to one of the boys, BW, as The Beast. 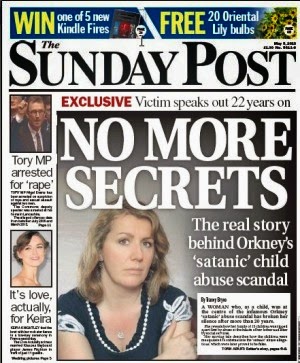 In November 1990, the authorities took the eight Willsher children away from their parents after one of the girls reported sexual abuse.

The social workers were told that a group gathered at a local quarry to chant, dance and have sex with 'The Master' (the Rev. Morris McKenzie) who would be wearing a black cloak and a black mask, and who would hook them out of the dancing circle with a crook.

One of the children was Jewish.

Objects suspected of being used in Satanic rituals were seized.

A Mrs T had written to nine-year-old BW in which she called him ''B - the beast''.

Some of the children reported seeing BW sexually involved with Mrs T.

Some of the children said they were dressed in BB, Brownie, or cowboy uniforms before being abused.

In April 1991, a judge, Sheriff David Kelbie, ordered that the children, apart from the Willshers, be returned to their parents.

Kelbie claimed that the children had been 'coached'.

One of the children, May Willsher, later said that one of the social workers, Liz McLean, was very manipulative.

Paul Lee, Orkney's director of social services, stated that the case against the parents would no longer be pursued.

However, an appeal against Kelbie's judgement was lodged at the Scottish Appeals Court.

The Appeals Court upheld the appeal on the grounds that Kelbie had 'allowed himself to form views about the contents (of the social workers' evidence that) would have made it impossible for him to bring a fair and balanced judgment to the issues'.