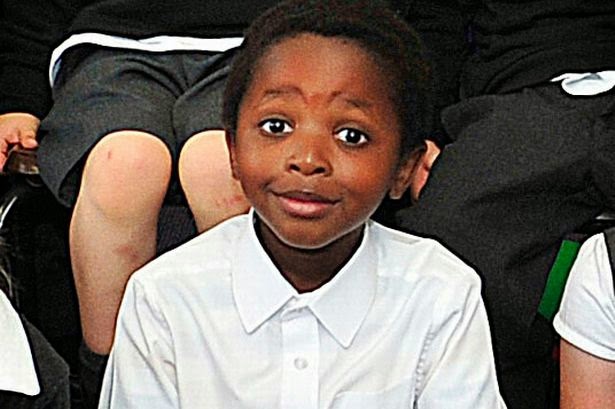 Scott Chirashi (above) had his heart ripped out by an individual or by a gang. 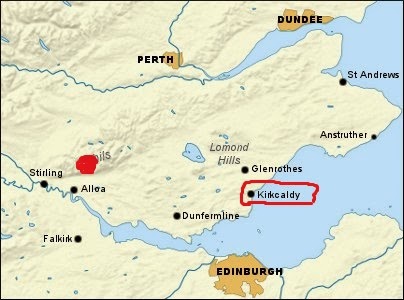 According to the official version, Scott's mother knifed Scott to death and cut out his heart.

A judge ruled that Farai Chirashi, 32, was insane when she killed her five-year-old
son, Scott.

The judge acquitted her of murder and ordered her to be detained in a secure mental hospital without limit of time. 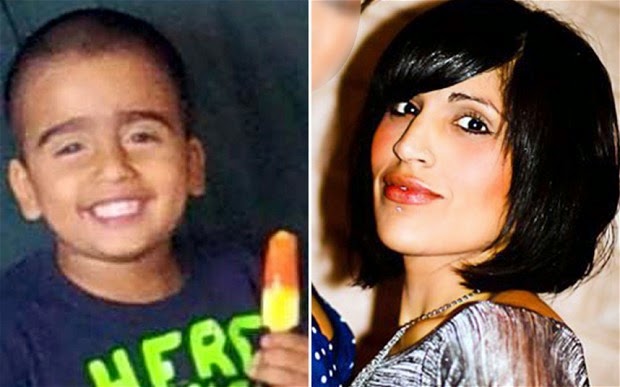 Rosdeep, the mother of Mikaeel Kular did not face a murder trial.


"Some local people claimed the decision to avoid a murder trial had been taken to protect the police and social services, whose failings were never heard in court as a result...

"Five thousand local residents have signed a petition protesting at the failure of prosecutors to pursue a murder charge..." 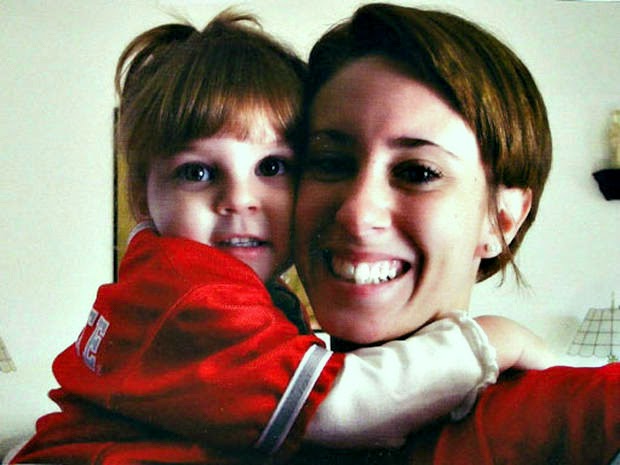 "To me, this really carries the same stink as the Caylee Anthony murder.

"Partying mom is purported to be the lone killer, but the air of a cult surrounds it.

"In the Anthony case there was the suspicious guy who "found" the body in the woods.

"The dad of the murdering mom who was a creepy cop.

"Like a cult that was maybe ritually torturing the kid, who accidentally died, so the mom becomes the scapegoat? I dunno."

Scott Chirashi's body was found at his home in Alva.

Scott was  killed at his home in Alva, Clackmannanshire, on December 4 or 5 2014.

Scott, his mother and sister had lived in Alva for at least seven years but had only moved to their new home earlier in 2014 after Chirashi and her husband Tichakunda Chiriseri split up.


The Stirling-based Agape For All Nations Ministries Internationals church is headed by Dr Joseph Masocha, from Zimbabwe, who claims he is a prophet 'annointed by God'.

Masocha has carried out exorcisms in his back garden.

Masocha has been accused of child sexual abuse 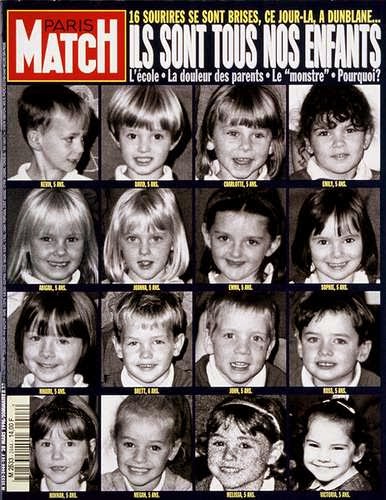 Alva is almost next door to DUNBLANE, which is linked to a top child abuse ring and the murders of 16 young childrend.

The unofficial story is that Thomas Hamilton was supplying pornography and young boys to top people, including policemen and politicians; and Thomas Hamilton may have been murdered, to shut him up.

On 25 August 2014, we learnt that Rosdeep Adekoya, who pleaded guilty to killing her son Mikaeel, may be out of jail in seven years time.

Samantha Lewthwaite stayed at the home of a Musa Hussein Abdi. 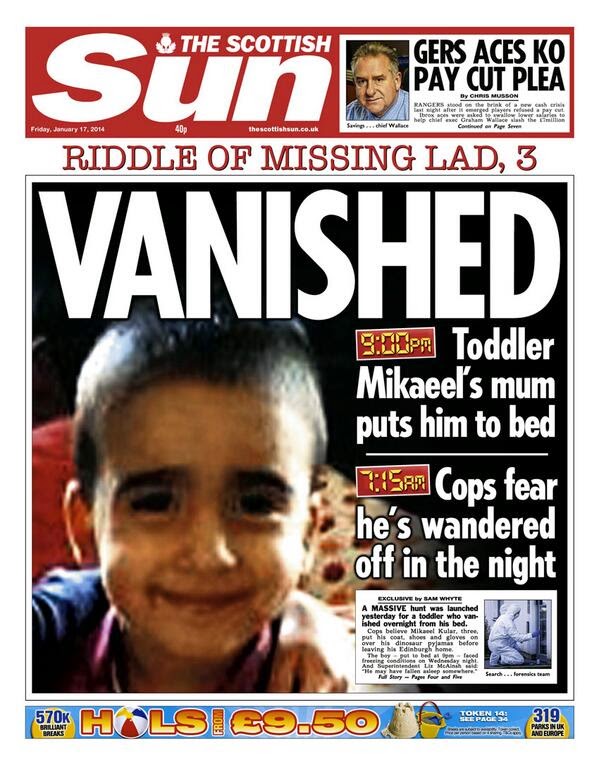 On 25 July 2014, we learnt that Rosdeep Adekoya had admitted the 'culpable homicide' of her young son Mikaeel Kular.

Rosdeep admits that in January 2014, in Edinburgh, she punched her three-year-old son to death.

There may be more to the story than meets the eye. 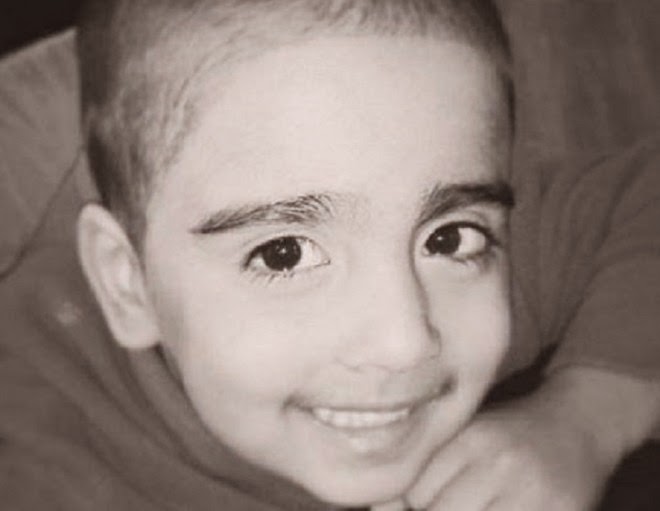 Rosdeep Kular's lover Mohamed Abdi was murdered on 26th May 2013.

"I know the guy got murdered.

"He lived at 2 Hawkhill close and his flat mate got killed 2 months earlier.

"He got murdered because the police raided 2 Hawkhill close and he was going to give evidence in 1 months time against the gang bringing the stuff into the country.

"He used to use private hire taxis to do his drug running and would pay them massive amounts for trips down souf.

"I know some drivers that got offered, should we say."

"The occultists' favourite, the full moon, was the 16th."

As we wrote above, in May 2013, Mohammed Omar Abdi, a Pakistani originally from Kenya, was arrested after a major drug seizure in the Edinburgh area.

Abdi's home in Edinburgh's Gracemount area was vandalised before his murder.

The writer Irvine Welsh spent his childhood in Muirhouse.

Apparently, Irvine Welsh knew all about the Sir Jimmy Savile, 'who supplied boys and girls to the elite'.

The character Freddy Royle, in Irvine Welsh’s 1996 novel Ecstasy, would appear to be based on Savile.

Jimmy Savile reportedly abused children both at Haut de la Garenne on the island of Jersey and in Fife.

Mikael Kular's body was found in Kirkcaldy in Fife.

The Sunday Herald had it confirmed by a very senior source in British intelligence that at least one high-profile former Labour Cabinet minister is among Operation Ore (child abuse) suspects.

Reportedly, the security services run, and protect, the pedophile rings.

When he lived in Fife, Mikaeel Kular (above) was put into foster care, because of concerns for his welfare.

Ziggy Ford and her husband cared for Mikaeel, but Mikaeel was returned to his mother after social workers thought she could cope.

One of the Kray twins and a boy who died very young.

The Kray twins ran a pedophile ring for top people.

Rosdeep Kular with drugs gangster Mohammed Abdi, who was presumably known to MI5.

Ian Brady "implies he may have ... buried bodies at the Campsie Fells near Glasgow."

(CHILD KILLERS PROTECTED. Body of boy, 3, found in a burnt out car after his grandfather failed to repay debt to Italian mafia)

Social workers in Fife were in regular contact with Mikaeel's family before he died.

The Elm Guest House boy brothel was regulary visited by police, social workers and politicians who enjoyed the company of the young boys.

Here we see Ashika, but not Mikaeel.

Here we see Rosdeep in Kirkcaldy, in Fife, north of Edinburgh.

Mikaeel Kular comes from a part of Edinburgh associated with a famous pedophile ring.

Dana Fowley was just five when her mother allowed the ring to repeatedly rape her.

In Kirkcaldy, in Fife, forensics officers checked a wooded area "where they appeared to investigate an unidentified blue van, which was parked on the cordoned-off track and flanked by police vehicles."

Mention of twins and bodies in woods could suggest Satanic Ritual Abuse.

A Dutch boy was murdered in February 2013. He was Moroccan by ethnicity, and also had a twin sister.

Mikaeel's body was found in woodland, after he went missing the previous day.

On 1 September 2002, it was reported that five young children in Fife, one aged five, had told police of Satanic ritual abuse.

Five men were investigated by the police.

Kirkcaldy is about 25 miles from Edinburgh, where Rosdeep and her children have their home.

"A teenage witness claims she saw Mikaeel, wearing a green jumper, playing inside his city home with his twin sister on 13 January 2014."

"But other neighbours have said Mikaeel has not been seen since the start of the year.

Khalida Hussain, 30, who lives just 20 yards from Mikaeel’s house, said: “We last saw him out playing here about a week before Christmas.”

Just before midnight on 17 January 2014, the body of three-year-oldMikaeel Kular was found in woodland just yards from his mother Rosdeep's former home in Kirkcaldy in Fife.

Dunvegan Avenue in Kirkcaldy, where the body was found.

Mikaeel was known to social services in Fife, which suggests problems of possible abuse.

Gordon Brown is the Member of parliament for Kirkcaldy.

Fife is a county just North of Edinburgh.

The police have made no mention of any well-connected pedophile ring.

Rosdeep with drugs gangster Mohammed Omar Abdi, 25, who was killed in a gang gun battle in Edinburgh in 2013. Abdi is the son of a senior Muslim cleric

Jacintha Saldhana was from Bangalore. KATE and WILLIAM NURSE MYSTERY

Dr Bangarpet Krishnaswamy is the director of East Neuk Healthcare, which owns a 40-bed nursing home in Anstruther, Fife.

Rosdeep ran a mobile health and beauty studio and has also been listed as a director at an IT company.

Rosdeep has links to groups promoting parties and disc jockies.

A report into Sir Jimmy Savile’s sex abuse revealed he had struck in Fife.

Val McDermid has stated that Vance, a TV celebrity with a secret lust for torture, murder and under-age girls who featured in the Wire in the Blood and two later books, is based on her direct personal experience of interviewing Jimmy Savile.[2]

If you Google: "Mikaeel Kular pedophile ring", you will find that little comes up. Expect a cover-up, now that Kirkcaldy has been mentioned.

Mikaeeel may have died towards the end of 2013?

The family live in a block of flats

He had a faded scar on the bridge of his nose and a sore on the left hand side of his mouth.

She was married to Omotoso Adekunle Adekoya and the couple originally lived in Fife.

They married in Glenrothes in 2004 before moving to Edinburgh and had two sons Tarun, nine, and David, seven, and daughter Renuka, five.

The couple split and Rosdeep moved back to Kirkcaldy before she met another man and gave birth to twins, Mikaeel Zayn Kular and Ashika Miskinah Rosie Kular.

She gave birth to Mikaeel and twin sister Ashika in 2010 but no father is named on the birth certificate.

Police outside the flats

One neighbour, who asked not to be named, said: "We heard that there had been trouble in the stair in the morning.

"I’m not sure what went on but a man ran out wearing a hoody shortly before the police came.

"My daughter was watching from the window and said that a man wearing a dark hoody ran out the building, but she didn’t know what had happened inside.”

Mikael has a twin sister.

Without disputing anything you've written here it occurs to me that Mikaeel wasn't actually the point of the exercise. I'm thinking that that unfortunate lot would fall to his twin sister.

According to the sundry books on MKULTRA / SRA that I've read it seems it's invariably the lot of twins that one be sacrificed in order to more rigidly embed the programming of the other. Doubtless the act would also carry some variety of occult significance but only of the dog and pony variety, ie. it's 'magick' being nothing more than a trick designed to further delude the foolish.

Either way, I have Mikaeel's sister, Akisha, pegged as 'girl most likely to suffer the unspeakable'. God pity her.

Some of the children.