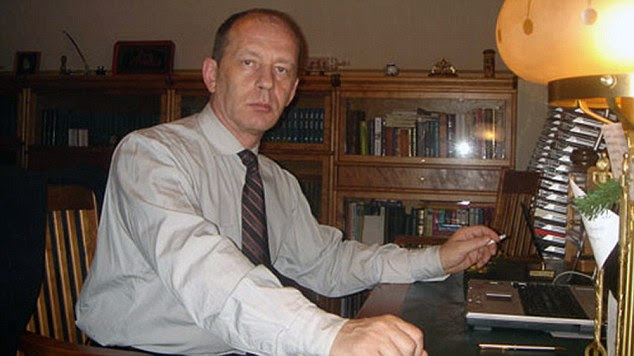 In 2013, the Russian oligarch Boris Berezovsky, a former critic of Putin, was found dead at his home in the UK.

Sergei Sokolov (above) was Boris Berezovsky's head of security.

According to Sokolov, Berezovsky was murdered by the Western security services because he was about to hand Putin the evidence of a plot involving leading oligarchs to topple Putin in a coup.

Sokolov, the head of a top Moscow private security agency, says Berozovsky (above) had opened negotiations with Putin on allowing him back to Russia.

According to Sokolov: 'Boris was killed only because he possessed information which he was going to share with Putin.

'I am absolutely sure that Boris had video and audio evidence about certain oligarchs who offered to organise a coup in the country, promising him to be seen as being at the head of the attack.

'Berezovsky planned to come back to his motherland with this sensational material.'

In its Dec. 30, 1996 issue, Forbes Magazine accused Berezovsky of having numerous mafia connections. "The role of Boris Berezovsky, in the Beslan massacre has never been made clear - but there is a growing belief that Litvinenko's silence was sought by people other than Putin..." Matrioshka - The Russian enigma

Sokolov says: 'I knew that Boris was in close relations with MI6, Mossad and the CIA.

'When he became dangerous for their recruited residents such as Russian politicians and oligarchs, the Western secret services decided to get rid of him.

'Berezovsky's murder was prepared for several months. It was a brilliant operation by the secret services.

'You decide: Berezovsky had a house .... round the clock security, CCTV cameras around the house. A fly would not make it.

'And on the day of his death all the security guards vanished, CCTV cameras were switched off for some reason, although they are placed every 100 metres.

'It is likely that not only MI6 took part in this operation but also CIA. There were people around Boris who were recruited by these secret services, including some of his guards.'

It was Berezovsky's personal guard and driver Avi Navam who found his Berezovsky in a locked bathroom.

It was claimed that Berezovsky hanged himself because he had lost a lot of money following a  £3 billion high court battle against Roman Abramovich.

The coroner Peter Bedford said that he could not prove beyond all reasonable doubt that Berezovsky either took his own life or was unlawfully killed.

Sokolov says: 'Let me assure you, Boris was not a poor man... At the moment of his death he had about $1 billion dollars in his bank accounts.

According to Sokolov, Berezovsky had good health, mentally and physically, and had a string of young lovers.

John le Carré, who was once a British spy, wrote 'Our Kind of Traitor'. The key character is Dima, who launders money for the Jewish Russian mafia. Dima wants to retire to Britain. He wants Britain's MI6 to arrange asylum in exchange for evidence incriminating his fellow bad guys who occupy top positions in Britain, Europe and America.

Sokolov says that in the 1990s, Berezovsky had ordered him to spy on Boris Nemtsov.

Nemtsov was reportedly killed in Moscow on 27 February 2015.

He admitted to a Moscow newspaper that he had installed listening equipment in the politician's flat during the Yeltsin era.

'Berezovsky ordered us to follow Nemtsov,' he said. "We followed his movements plus installed recording equipment in his flat.

'Some part of compromising materials Berezovsky showed to Boris Yeltsin, something used for other purposes.'

'From the point of view how it was planned, it is very much like CIA operation.'