Reggie Love has teamed up with Jim Messina, the Obama campaign manager in 2012, who is helping the UK Conservatives.

David Cameron was educated at the private school called Eton

'THE IMPORTANCE OF BEING ETON: Inside the World’s Most Powerful School'

In a review of Fraser's book in The Sunday Times, 4 June 2006, John Carey described Fraser's view of Eton:

"Nothing in later life can compete (with Eton), particularly not women.
"There must be 'many hundreds of Eton lives', (Fraser) believes, in which women and wives are mere shadows beside the company of other men.

"He (Fraser) was subjected to a furtive sexual assault by the headmaster, Anthony Chenevix-Trench, whose proclivities in this area were not made public until after his death..." 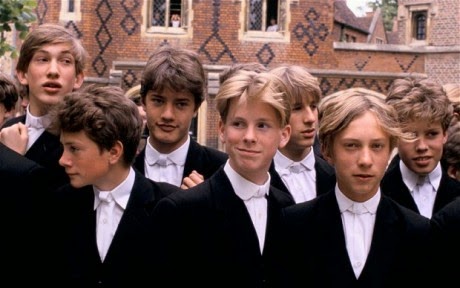 Nick Cohen, in an article about Paul Foot in the Observer, refers to Chevenix-Trench:

"Even by the standards of England's public schools, Anthony Chenevix-Trench, (Paul Foot's) housemaster at Shrewsbury, was a flagellomaniac.
"Foot recalled: 'He would offer his culprit an alternative: four strokes with the cane, which hurt; or six with the strap, with trousers down, which didn't.
"'Sensible boys always chose the strap, despite the humiliation, and Trench, quite unable to control his glee, led the way to an upstairs room, which he locked, before hauling down the miscreant's trousers, lying him face down on a couch and lashing out with a belt.'

"Naturally, Chenevix-Trench was promoted and became a headmaster, first of Eton and then of Fettes.
"Exposing him in Private Eye was one of Foot's happiest days in journalism. He received hundreds of congratulatory letters from the child abuser's old pupils, many of whom were now prominent in British life."

...
Eton - where many top Conservatives are educated.

According to Nick Fraser:

Etonians appear "arrogant pricks, closet homosexuals, members of a corrupt Masonic order, or at the very least, as Alan Bennett puts it, exotic creatures beyond the comprehension of lesser mortals educated at state schools”.

Godfrey Smith, in the Sunday Times, 28 May 2006, refers to some famous Etonians:

"Darius Guppy... went to prison for six years for trying to swindle Lloyd’s out of £1.8m by staging a fake jewellery robbery.

"A rather similar fate overtook the playboy Etonian Lord Brocket, who once owned 42 Ferraris. When the classic-car market collapsed, he dismantled four Ferraris, hid them and claimed the insurance money.

"He could hardly, however, match the notoriety of Crown Prince Dipendra of Nepal, who in 2001 in a drunken rage mowed down eight of his family, including his father, thus becoming king for a few minutes till he turned his gun on himself. Nevertheless he is listed on the Eton website as the king of Nepal.

"Equally notorious is Lord Lucan, who killed his children’s nanny by mistake before going missing.

"Simon Mann, son of a former England cricket captain, languishes in a Zimbabwean prison after being convicted of plotting to overthrow the government of Equatorial Guinea.

"Ronnie Ferguson, father of the Duchess of York, and Lord Lambton were both involved in sex scandals, while the Tory minister Alan Clark was a renowned bounder who was once threatened with horse-whipping by a judge whose wife and two daughters he had seduced.

"Jimmy Goldsmith was the kind of cad who kept a wife in London and a mistress in Paris."
MYSTERIOUS DAVID CAMERON.
Posted by Anon at 11:15