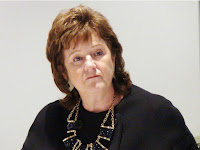 Prof Jay led the inquiry in child abuse in Rotherham which found that at least 1,400 children were sexually abused in the town between 1997 and 2013.

It can be argued that the Rotherham child abuse inquiry was a cover-up.

After the Rotherham inquiry, 'nobody faced disciplinary action.'

There was no mention of the possible links between the Rotherham child abuse rings and the security services.