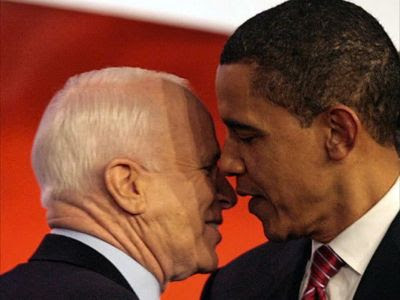 John McCain is reportedly one of the organisers of al Qaeda and ISIS.

In January of 2014, the US Congress held a secret meeting at which it voted to approve funding for Al-Qaeda and ISIS.

'CIA agent' John McCain is one of the people destroying the Moslem World, with the help of many Moslems.

John McCain is a total fake and much of what we have been told about his past is untrue.

According to Thierry Meyssan at www.voltairenet.org:


1. When I was in Libya during the "Western" attack, I was able to view a report of the foreign intelligence services.

It stated that, on February 4, 2011 in Cairo, NATO organized a meeting to launch the "Arab Spring" in Libya and Syria.

According to this document, the meeting was chaired by John McCain.

The report detailed the list of Libyan participants, whose delegation was led by the No. 2 man of the government of the day, Mahmoud Jibril...

The story of Mohamed Bouazizi was fake. THE REAL ARAB SPRING

He met members of the Future Movement (the party of Saad Hariri) whom he charged to oversee the transfer of arms to Syria [4]...

3. In May 2013, Senator John McCain was in Syria, via Turkey, to meet with leaders of the "armed opposition"...

This movement was organized by the Syrian Emergency Task Force, which is a Zionist organization led by an employee of AIPAC 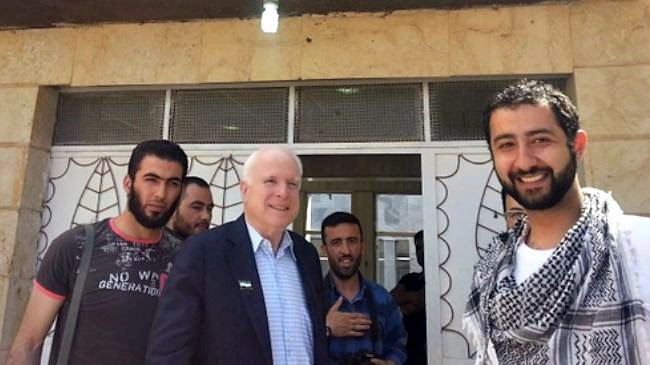 In photographs released at that time, we see John McCain and Mohammad Nour, a spokesman for  al-Qaeda in Syria...[8] 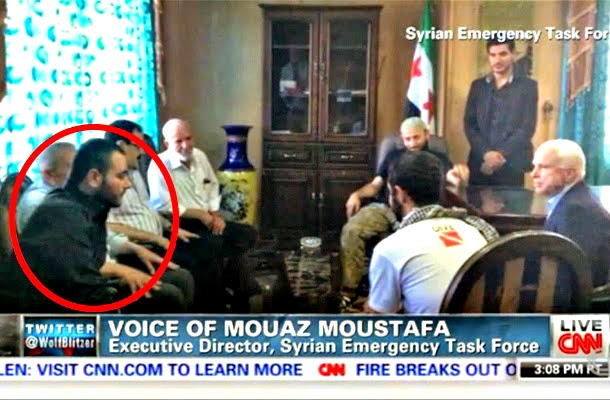 John McCain in Syria in 2013. In the left foreground, we see the boss of ISIS Abu Bakr al-Baghdadi, aka Ibrahim al-Badri, aka Abu Du’a.

So, in 2013, McCain meets al Qaeda, including al-Baghdadai, in Syria. 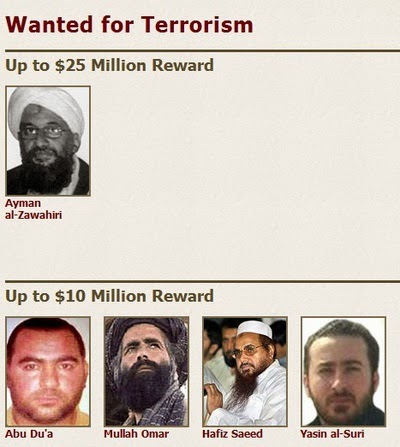 Since October 4, 2011, the boss of ISIS Abu Bakr al-Baghdadi, aka Ibrahim al-Badri, aka Abu Du’a has been on the list of the five terrorists most wanted by the United States (Rewards for Justice).

A premium of up to $ 10 million was offered to anyone who would assist in his capture. [9]

The next day, October 5, 2011, Ibrahim al-Badri was included in the list of the Sanctions Committee of the UN as a member of Al Qaeda. [10] 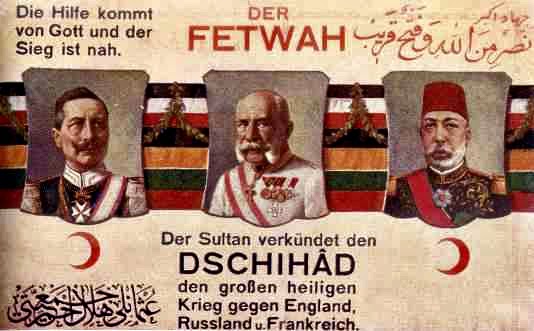 4. A month before receiving Senator McCain, al-Baghdadi, created ISIS - all the while still belonging to the staff of the very "moderate" Free Syrian Army.

He claimed as his own the attack on the Taj and Abu Ghraib prisons in Iraq, from which he helped between 500 and 1,000 jihadists escape who then joined his organization... [11] 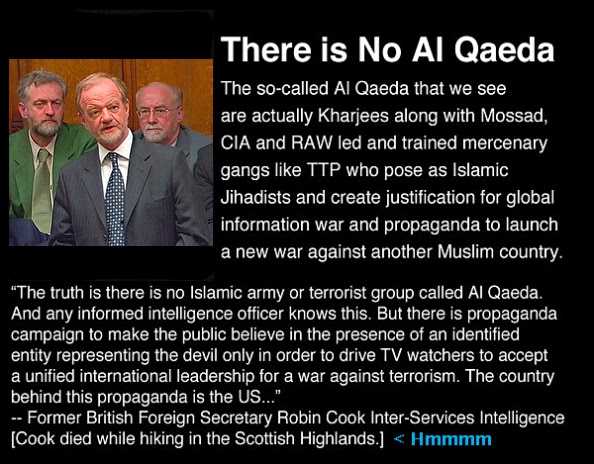 5. I have always said that there is no difference on the ground between the Free Syrian Army, Al-Nosra Front, and ISIS etc ...

All these organizations are composed of the same individuals who continuously change flag.

When they pose as the Free Syrian Army, they fly the flag of French colonization and speak only of overthrowing the "dog Bashar."

When they say they belong to Al-Nosra Front, they carry the flag of al Qaeda and declare their intention to spread Islam in the world.

Finally when they say they are ISIS, they brandish the flag of the Caliphate and announce that they will clean the area of all infidels. But whatever the label, they proceed to the same abuses: rape, torture, beheadings, crucifixions.

6. Yet neither Senator McCain nor his companions of the Syrian Emergency Task Force provided the information in their possession on Ibrahim al-Badri to the State Department, nor have they asked for the reward. Nor have they informed the anti-terrorism Committee of the UN... 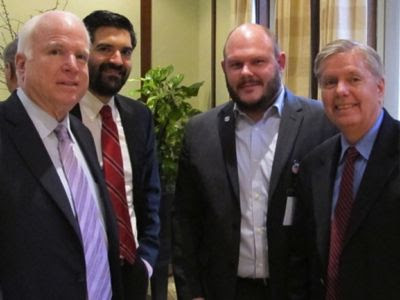 Accused of plotting the overthrow of President Hosni Mubarak, the two employees of the republican branch of NED (International Republican Institute - IRI) in Cairo, John Tomlaszewski (second right) and Sam LaHood (second left) took refuge at the embassy of the United States. Here they are along with Senators John McCain and Lindsey Graham at the preparatory meeting of the "Arab Spring" in Libya and Syria. They would be released by Brother Mohamed Morsi when he became President.

7. John McCain ... is in fact President of the republican branch of NED (The National Endowment for Democracy) which is the CIA...

McCain with the Zionists and Nazis that he later helped put into power in Ukraine - Arseniy Yatsenyuk (L), and Andriy Tyagnybok (C).

8. John McCain has participated in all the color revolutions of the last twenty years. 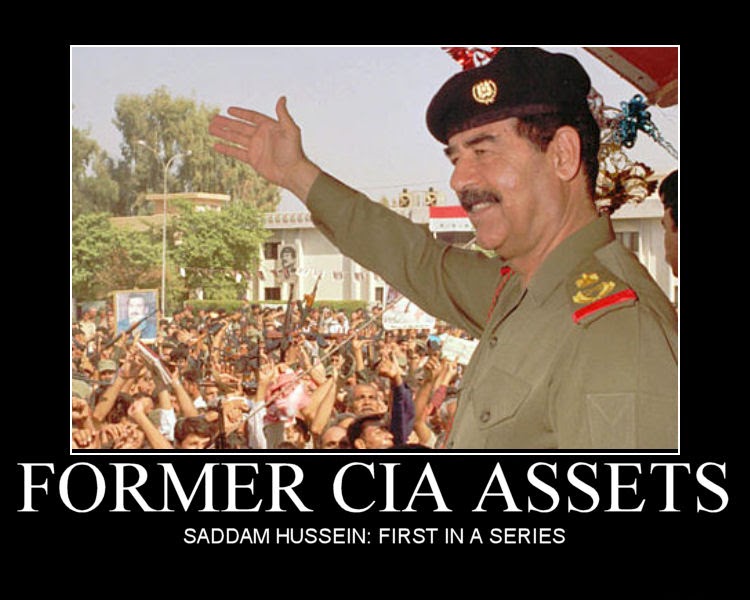 Exclusive: Saddam was in CIA / GADDAFI, SADDAM AND THE CIA

What is the US strategy with the jihadists?

In 1990, the United States decided to destroy its former Iraqi ally...

However, because of the opposition of the USSR, they did not overthrow the regime, but were content to administer a no-fly zone.

In 2003... the United States attacked the country again and this time overthrew President Hussein...

They tried to partition Iraq into three separate states, but had to give it up due to the resistance of the population.

They tried again in 2007 ... but again failed. [18] Hence the current strategy that attempts to achieve this by means of ... ISIS. 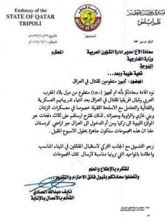 10. The current ISIS operation was planned well in advance, even before the meeting between John McCain and Abu Bakr al-Baghdadi.

For example, internal correspondence from the Qatari Ministry of Foreign Affairs, published by my friends James and Joanne Moriarty [19], shows that 5,000 jihadis were trained at the expense of Qatar in NATO’s Libya in 2012, and 2,5 million dollars was paid at the same time to the future Caliph.

In January of 2014, the US Congress held a secret meeting at which it voted... to approve funding for the Al-Nosra Front (Al-Qaeda) and ISIS, until September 2014. [20]

Although it is unclear precisely what was really agreed to during this meeting revealed by the British Reuters news agency [21], and no media US media dared bypass censorship, it is highly probable that the law includes a section on arming and training jihadists. 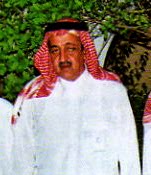 ISIS "is led by al-Baghdadi on behalf of the Saudi Prince Abdul Rahman al-Faisal, a graduate of Sandhurst military academy. He is funded and supervised jointly by U.S., French and Saudi officers. ISIS works for the US, France and Saudi Arabia

11. Proud of this US funding, Saudi Arabia has claimed on its public television channel, Al-Arabiya, that ISIS's Islamic Emirate was headed by Prince Abdul Rahman al-Faisal, brother of Prince Saud al Faisal (Foreign Minister) and Prince Turki al-Faisal (Saudi ambassador to the United States and the United Kingdom) [22].

12. The Islamic Emirate represents a new step in the world of mercenaries...

Unlike previous groups in Iraq, Libya and Syria, around Prince Bandar bin Sultan, they have sophisticated communication services at their disposal for recruitment and civilian officials trained in large western schools capable of instantly taking over the administration of a territory.

Brand new Ukrainian weapons were purchased by Saudi Arabia and conveyed by the Turkish secret services who gave them to the Islamic Emirate.

Masoud Barzani, Kurdish politician who has been President of the Iraqi Kurdistan Region since 2005

Final details were coordinated with the Barzani family at a meeting of jihadist groups in Amman on 1 June 2014. [23]

The joint attack on Iraq by the Islamic Emirate and the Kurdistan Regional Government began four days later.

The Islamic Emirate seized the Sunni part of the country, while the Kurdistan Regional Government increased its territory by over 40%.

Fleeing the atrocities of jihadists, religious minorities left the Sunni area, paving the way for the three-way partition of the country.

Violating the Iraqi-US Defense agreement, the Pentagon did not intervene and allowed the Islamic Emirate to continue its conquest and massacres. 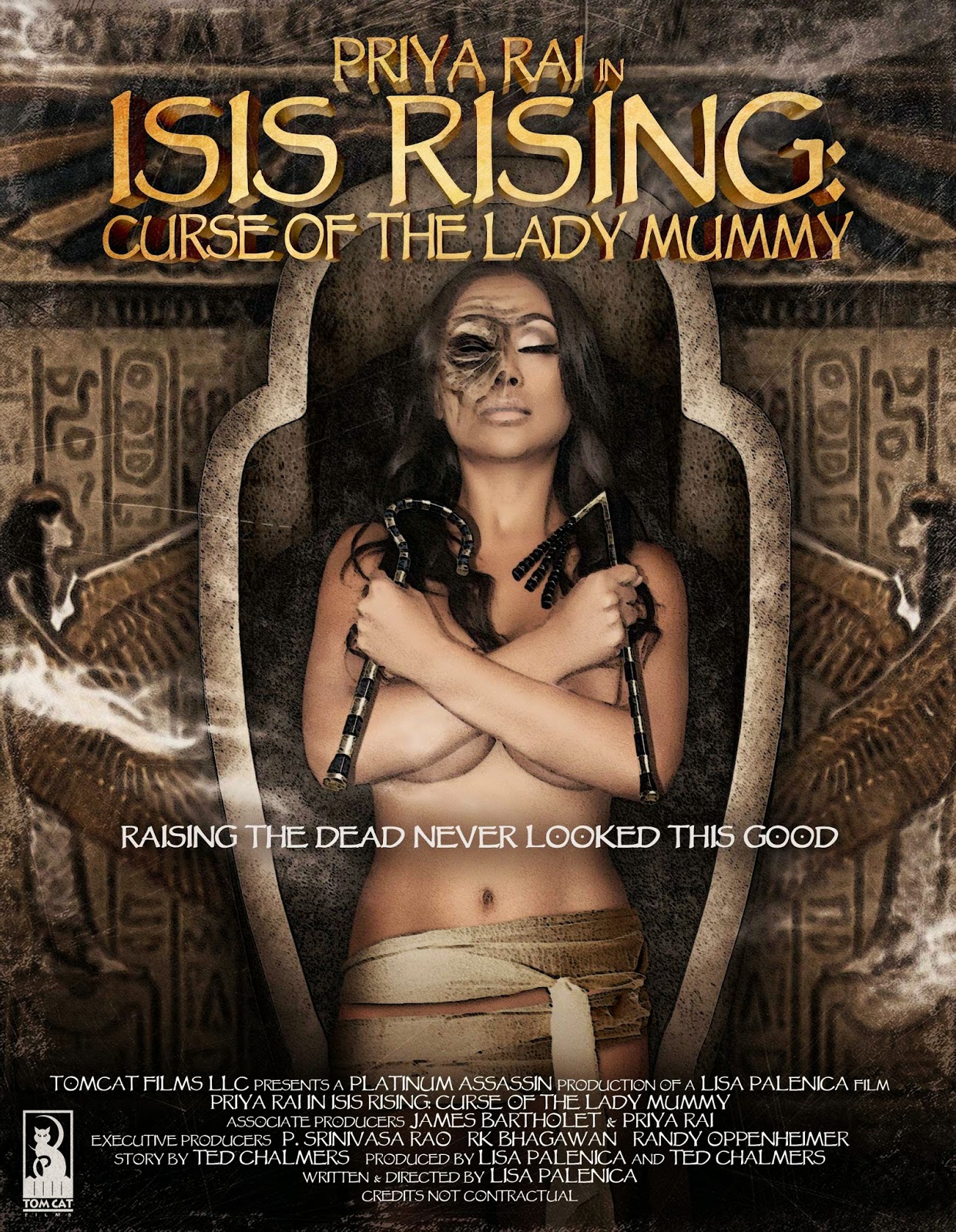 13. A month later, while the Kurdish Peshmerga Regional Government had retreated without a fight, and when the emotions of world public opinion became too strong, President Obama gave the order to bomb some positions of the Islamic Emirate.

However, according to General William Mayville, director of operations at the headquarters, "These bombings are unlikely to affect the overall capacity of the Islamic Emirate and its activities in other areas of Iraq or Syria ". [24]

Obviously, they are not meant to destroy the jihadist army, but only to ensure that each player does not overlap the territory that has been assigned.

Moreover, for the moment, they are symbolic and have destroyed only a handful of vehicles.

It was ultimately the intervention of the Kurds of the Turkish and Syrian Kurdish PKK which halted the progress of the Islamic Emirate and opened a corridor to allow civilians to escape the massacre. 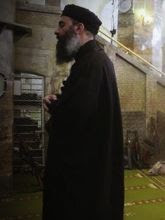 14. Much disinformation is circulating about the Islamic Emirate and its caliph.

The Gulf Daily News newspaper claimed that Edward Snowden had made revelations about it. [25]...

Gulf Daily News is published in Bahrain, a state occupied by Saudi troops.

The article aims to clear Saudi Arabia and Prince Abdul Rahman al-Faisal of their responsibilities...

Al-Baghdadi is under the orders of Prince Abdul Rahman (Member of Sudeiris clan).

It would not be surprising if al-Baghdadi continued his epic in Saudi Arabia (after a brief detour in Lebanon or Kuwait) and determined the Royal succession favoring the Sudeiris clan over Prince Mithab (son, not brother of King Abdullah).

Thierry Meyssan at www.voltairenet.org:
Posted by Anon at 00:26