A gay couple, who are penguins, have adopted an abandoned chick.

The human staff at the Wingham Wildlife Park in the UK say that the gay couple, Jumbs and Kermit, are the two 'best penguin parents' they have had 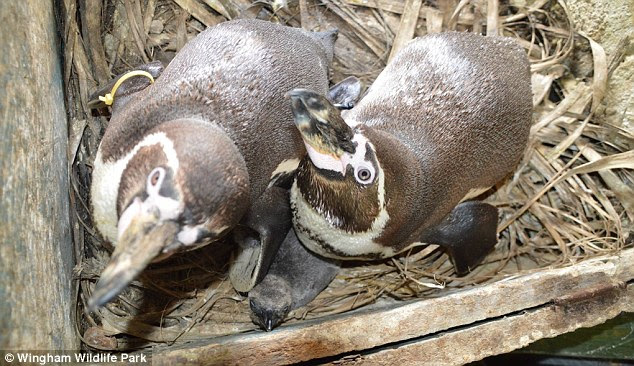 The animal and human kingdoms are bisexual.

Why does God, or nature, create gay people?

1.  "Androphilic males - that is, males who are sexually oriented toward other males - show up in cultures around the world."

2. In many cultures certain types of Androphile males are reputed to be particularly kind towards members of their family.

3. "In Samoa, for example, there is now substantial evidence for above-average kin-directed altruism among the culture’s androphilic males, a group known as the fa'afafine."

4. In Samoa, a young boy who shows an interest in female-type activities like cooking will spend a lot of time attending to the family needs.

"It is common to hear people say that families that include fa'afafine are particularly fortunate..."

5. A team of researchers, writing in the journal Human Nature, suggest that what they have found in Samoa may be the way things have been throughout much of human History.

6.  The Aché, hunter-gatherer people from Paraguay, have a type of androphilic male who "generally stay with the women's and children's group during the day.... They also sometimes care for sick and injured individuals..."

7. "Perhaps what these (gay) boys need is fewer doctors, and more grateful families."

We should not forget that God (or nature) creates lots of different kinds of gay people.

Picasso had a sexual relationship with the gay French poet Max Jacob.

Gay people are smarter on average

Africa has produced some of the most intelligent people on the planet. (List of African-American inventors and scientists)

Salma Hayek and Ashley Judd. According to an article entitled:Bigots are buggers : "Research by US psychologists suggests that 80% of men who are homophobic have secret homosexual feelings. The research results were published in the prestigious Journal of Abnormal Psychology, with the backing of the American Psychological Association."

People who are sexually attracted to children often make the best teachers and girl-guide leaders and often look after the waifs and strays that families have abandoned.

Famous Jews who have made life more interesting include: Jesus Christ, Benjamin Franklin, Felix Mendelssohn, Camille Pissarro, the Marx Brothers, Carl Sagan and Baruch Spinoza.
We should not be like the Nazis and see everything in black and white.

The world needs gay people, black people, Jewish people and even people who find children sexually attractive (so long as they are not child abusers).

We need more people to be gay.

In Africa, Asia, the Americas and Europe, before the missionaries arrived, homosexuality was widespread.

The purpose of homosexuality, in evolution, may be to keep down the size of the population.

"The more complex and sophisticated a social system is," she writes, "the more likely it is to have homosexuality intermixed with heterosexuality."

He writes of the paradox: that if homosexuality is a product of evolution, then "genetic factors associated with same-sex preference must enjoy some sort of reproductive advantage...

"Anything that diminishes, even slightly, the reproductive performance of any gene should (in evolutionary terms) be vigorously selected against...

"The consensus among scientists is that same-sex preference is rooted in our biology.

"Some of the evidence comes from the widespread distribution of homosexuality among animals in the wild...

1. "Insofar as homosexuals have been freed from investing time and energy in their own reproduction, perhaps they are able to help their relatives rear offspring."

This could be "to the ultimate evolutionary benefit of any homosexuality-promoting genes present in those children...

"Some recent research has focused on male homosexuals among a more traditional population on Samoa.

"Known as fa'afafine, these men do not reproduce, are fully accepted into Samoan society in general and into their kin-based families in particular, and lavish attention upon their nieces and nephews - with whom they share, on average, 25 percent of their genes. 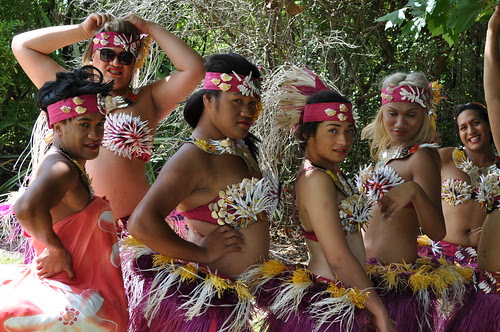 2. "There is some anthropological evidence that in pre-industrial societies homosexual men are more than randomly likely to become priests or shamans."

"Perhaps the additional social prestige conveyed to their heterosexual relatives might give a reproductive boost to those relatives, and thereby to any shared genes carrying a predisposition toward homosexuality."

3. "Groups containing homosexuals might have done better than groups composed entirely of straights.

"It has recently been argued, most cogently by the anthropologist Sarah B. Hrdy, that for much of human evolutionary history, child-rearing was not the province of parents (especially mothers) alone.

"If sufficient numbers of those assistants had been gay, their groups may have benefited disproportionately.

"Alternatively, if some human ancestors with a same-sex preference reproduced less (or even not at all), that, in itself, could have freed up resources for their straight relatives...

"Homosexuality might correlate with greater sociality and social cooperation; similarly, it might deter violent competition for females."

For the Buddhists, all visual attraction is the reaction of the lower self. Fleshly charm does not last and is in a sense unreal. In other words, you don't need a girl/boyfriend; and the girl/boyfriend's sexiness is a bit of an illusion. However, according to the Buddhists, avoiding sex, while continuing to think foul thoughts, is not good. Better to obtain physical outlet, while thinking wholesome thoughts. (aangirfan: THOMAS MANN)

4. "One study has found that female relatives of gay men have more children than do those of straight men.

David P. Barash, an evolutionary biologist, is a professor of psychology at the University of Washington. His most recent book is Homo Mysterious: Evolutionary Puzzles of Human Nature (Oxford University Press, 2012).

In the 1950s Nabokov wrote Lolita. Nabokov liked girls, so long as they looked like boys. Lolita was the girl with the ‘puerile hips’, the girl wearing ‘shorts’. Nabokov and Pale Fire and deception

Continued here: FAMOUS GAY PEOPLE AND SOME OTHERS

Albert Goldman’s 'The Lives Of John Lennon' (1988) claimed that John Lennon had a gay affair with The Beatles' manager, Brian Epstein, during a four-day holiday in Barcelona in April 1963. (Cached) It also refers to a number of relationships which Lennon reportedly had with other men.Goldman claims that Lennon visited underage boy prostitutes in Thailand.

Just one point of dissension: Jesus was NOT a jew, he was a JUDEAN - the native of a certain geographic location.

THANK YOU SO MUCH FOR THIS ARTICLE AAANG!

I am the gay oldest of four sibs.

Ive never been able to enjoy the happiness and security of marriage.

My three sisters have been helped by me in their childrearing for 20 yrs.

I must say all the love and joy I've recieved from the co-parenting has very much enriched my life, and I say with pride, the lives of my nephews and nieces.

They all love and respect me.

You know why? Because as a nonperverted, decent, moral gay person, I earned thier love and support.

Their will alwys be hateful people who try to morph the pedophiles and abusers with the moral, nonperverted gay, but the statistics on hetero males abusing daughters, sisters, and what not is staggering.

Not to in any way demean the pain and anguish the abused have suffered at the hands of the evil abusers who are gay, but satanic torture is about gaining demonic payback, not sexual pleasure.

The issues are far more complex than the average person knows.

You may have noticed that certain people are in need of a good education.

These are usually white people.

"White schoolchildren in Britain's poorest communities lag behind peers who are black or of Pakistani or Bangladeshi origin."

This is according to a Financial Times analysis of more than 3m sets of exam results.

"Poor white children even achieve worse average results than deprived pupils for whom English is a second language."

It is generally these 'poor whites' who write the 'ignorant' comments on blogs.

Lynching of an innocent black kid in the USA. Outside a courthouse in Omaha, Will Brown, after being killed, mutilated and burned. Brown was innocent of the crime of which he had been accused. Cached

In the UK, "Poor white children have fallen behind by the time they reach the age of seven...

"In Hull, the worst-performing local authority area, a child eligible for free school meals, a widely used indicator of poverty, has a more than two-thirds chance of finishing in the bottom fifth of national exam results at the age of 16."

Matthew Shepard was an American student who was tortured and murdered near Laramie, Wyoming in 1998.

Shepard was targeted because he was gay.[1].

In 2013, The Book of Matt: Hidden Truths About the Murder of Matthew Shepard, by Stephen Jimenez, asserts that Shepard was a "major" methamphetamine dealer, and that Shepard and at least one of his killers (McKinney) had been occasional sexual partners.[63][64]

"Jimenez never qualifies how credible the sources are, or validates their closeness to Shepard, or evaluates the potential motivations for their accounts."[62]

Police officials interviewed after the book's publication disputed claims made in the book.

Rob Debree, lead sheriff's investigator at the time, said the book contains "factual errors and lies", and said Jimenez's claim that Shepard was a drug dealer is "truly laughable".[59]

A gay teenager was reportedly murdered by his uncle and father in Turkey because of his sexuality, according to Hurriyet Daily News.

A study by Edinburgh University researchers found that childhood intelligence is linked to voting preferences and political involvement in adulthood.

British National Party voters, some of whom are fans of Hitler, had the lowest average intelligence - scoring just 98.4.

The USA also has its poorly educated, fundamentalist whites.

People who give in to racism, and prejudice against people like gays, may simply be poorly educated.

"The research finds that children with low intelligence are more likely to hold prejudiced attitudes as adults."

The research was led by Gordon Hodson, a psychologist at Brock University in Ontario.

Earlier studies have found links between low levels of education and higher levels of prejudice.

Low intelligence in childhood corresponded with racism in adulthood.

"There is reason to believe that strict right-wing ideology might appeal to those who have trouble grasping the complexity of the world."

According to Hodson: "Socially conservative ideologies tend to offer structure and order," something which appeals to people with low intelligence. "Unfortunately, many of these features can also contribute to prejudice."

In a study in the United States, Hodson and Busseri compared 254 people with the same amount of education but different levels of ability in abstract reasoning.

They found that people who were poorer at abstract reasoning were more likely to exhibit prejudice against gays.

Brian Nosek, a social and cognitive psychologist at the University of Virginia, says: "I think that lower cognitive capacity can lead to multiple simple ways to represent the world, and one of those can be embodied in a right-wing ideology..."

"There may be cognitive limits in the ability to take the perspective of others, particularly foreigners," Hodson says.

"Much of the present research literature suggests that our prejudices are primarily emotional in origin rather than cognitive."
Posted by Anon at 08:40