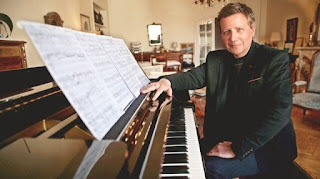 French pianist Stefan Blet (Stefan Bled) received many threats from the Jewish lobby for his anti-Zionist statements - anti-Israeli attitude and statements against the occupation of Palestine.
...
Thunersee commented -

Event from Geneva Switzerland (former town of Banque de Credit Internationale, Permindex and IOS of Bernie Cornfeld (all said to be related to CIA/Mossad)) :

January 7th, 2022, Stéfane Bled / Stefan Blet, a very talented and formerly renowned pianist, comitted suicide in Geneva, jumping from the balcony of the 5th floor of an appartment building.

Stéfane had once been a freemason, but fell out with that gang and openly critizised the Jewish power groups in France.

Consequently he had to emigrate to Turkey, reportedly receiving freqent death threats.

TPTB managed to ban him completely from performing in public and finally he seemed to have had serious financial problems.

He was definitely railroaded to this tragic end, I would not be surprised, if future findings would prove that he had actually been murdered.

See following reports in french from his friends:

Needless to say, Google, http://Yandex.ru and TOR all completely block this news...