On 29 September 2015, Hassan Salem, the head of Iraq's Sadeqoun party, said that the Hajj stampede was a plot by the Saudi regime to abduct Iranian and Iraqi officials.

Salem said that the convoy of Saudi Crown Prince Mohammad Bin Salman Al Saud caused the death of thousands pilgrims, and said, "Many of these pilgrims are the Iraqi and Iranian officials who have been abducted."

Mohammad bin Salman Al Saud was escorted by over 350 security forces, including 200 army men and 150 policemen according to the Arabic language al-Dyar newspaper. 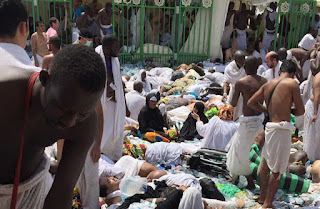 There are reports that Mossad got a Saudi prince to organise the stampede so that certain top Iranians could be kidnapped.

"Nahrin Net network news has learned from employees working in the European Union that there are whispers in diplomatic circles in Brussels that the (Mecca stampede)... was the result of a "deliberate process" and was pre-prepared by Israeli and Saudi intelligence services targeting the officials of the Iranian Revolutionary Guard Corps and Iranian officials in the State, including diplomats...."

"According to al-Nahrain-net News Agency, a report from a European intelligence agency which has been corroborated by further testimony from European diplomatic sources in Brussels, indicates that the Mossad, Israel’s foreign intelligence agency, used the cover of the stampede to abduct a large number of high ranking officials in Iran’s government.

"The Al-Nahrain-net expose’ on the stampede in Mecca, which is based on preliminary intelligence reports, indicates that Saudi and Israeli intelligence agencies have collaborated to abduct IRGC commanders, diplomats and staff who were working in the office of Iran’s Supreme Leader, Ayatollah Ali Khamenei. The former Iranian ambassador to Lebanon, Ghazanfar Roknabadi, is also believed to have been kidnapped in the deadly stampede.

"Mr. Roknabadi is a prominent member of the Supreme Leader’s office staff and a figure who is well informed regarding the secrets of the Hizbullah missile armament by Tehran.

"At this time, many EU diplomats have rejected the authenticity of this report, and there is rising speculation that Russians leaked this information to western intelligence agencies.

"Al-Nahrain-net added that Iranian officials neither confirmed nor rejected the allegations regarding the abduction of Ghazanfar Roknabadi and other IRGC commanders during the hajj rituals. Israelis have been very eager to discover the secrets of Iranian missile industry.

"An unnamed European intelligence agency has released this information, which has been corroborated by diplomats in Brussels. If this report turns out to be accurate, it will signify a high level of intelligence coordination between Riyadh and Tel Aviv for it would be almost impossible to carry out the abduction of the Iranian targets by the Mossad or western agencies without the Saudi’s blessing and acquiescence."