William Branham (1909 - 1965) was a world famous Pentecostal pastor, allegedly born in Kentucky in the USA.

He also has links to the Freemasons and the CIA. 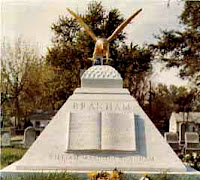 Branham claimed that the UK's King George VI was healed through his prayers[37].

However, George VI died less than two years after Branham prayed for him.[38]

In 1947, a minister in Canada stated that many of those that Branham 'healed' actually died soon after.

Kydd, Ronald A. N. (1998). Healing through the Centuries: Models for Understanding.

Branham claimed to be the end-time "Elijah".

In 1933, Branham was baptising converts in the Ohio River.

He said that people along the bank saw a light descend over where he was standing.

He said that he heard a voice say, "As John the Baptist was sent to forerun the first coming of Jesus Christ, so your message will forerun His second coming."[21] 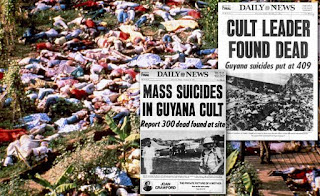 Branham is linked to the CIA's Jim Jones, best known for the mass murder of his followers at Jonestown in 1978.

Jones and Branham shared the pulpit at a mammoth religious convention in1956. [45]

Branham taught that Eve and the serpent had sexual intercourse and that every woman potentially carried the literal seed of the devil.[62]

Banham taught that the USA would be destroyed by 1977 and then Christ would return.

Branham still has many followers in such countries as the Congo, Brazil and USA.

Reportedly, Paul Schneider Schaefer, the Jewish nazi who created and ran Colonia Dignidad, said that he got his inspiration to create Colonia Dignidad from Pentecostal minister William Branham.

Colonia Dignidad was used by the CIA and friends to torture and mind control children.

Reportedly, a regular visitor to Colonia Dignidad was the German politician Franz-Josef Strauss.

"When they set up their commune in Prescott, AZ, he even dedicated their 'park' with his blessing.

"Years later, we find their homosexuality exploded into much, much worse. Why did Branham do this when he knew they were homosexual?"