The above ISIS Colonel was trained by Blackwater and by the U.S. State Department for 11 Years.

ISIS has billions of dollars in American-supplied military equipment.

The West reportedly sent TALHA ASMAL and other 'VICTIMS' to join ISIS in Iraq.

The CIA and its friends have a long history of running terrorist groups. 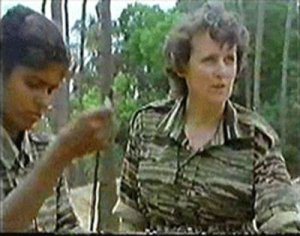 Adele Ann Wilby (above) is the Australian-born former leader of the women's wing of the Tamil Tigers.

She currently lives in London.

Reportedly she was in charge of recruiting children to fight for the Tamil Tigers.

"Funds ... came from Oxfam (Oxford Famine Relief), one of the most powerful and secretive British intelligence organizations acting under non-governmental organization cover...

"John Glover, a British feature writer, wrote to the Western Mail in Wales about the ongoing and future training programs for Tamil youth by British mercenaries.

beyondheadlines.in.
"According to accounts by retired officials of ... Mossad, the Israelis were simultaneously training the Sri Lanka Army and the Tigers, and providing arms to each.
"Victor Ostrovsky, author of By Way of Deception, told Indian Abroad news service in 1991 that the Tigers were trained in Israel in 1985.
"These groups kept coming and going. It was part of our routine job to take them to training camps and make sure that they were getting training worth what they paid for, not more and not less."
"Ostrovsky said that the arrangement for the training was made by the Mossad liaison in India, who lived there under a British passport.

"A December 1983 Sunday Mail article reported that the Mossad was arming and training the Tigers, as well as the Sri Lankan Armed Forces. 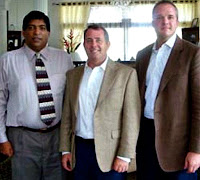 The Tamil Tigers were reported to be involved in trafficking heroin...

"In 1987, the Hindustan Times reported that large quantities of arms with Pakistani and Israeli markings were seized by the Indian Peacekeeping Force in Jaffna from the Tamil Tigers...

Did Mossad turn TALHA ASMAL into a suicide bomber?

Quote from a review by Sachi Sri Kantha of By Way of Deception; The Making and Unmaking of a Mossad Officer:

"Israel trained the Sri Lankan resistance in the mid 1980's.
"The very first Tamil Tiger suicide attack was on July 5, 1987."