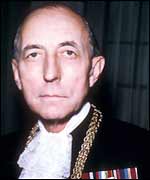 Beginning in 1919, the assistant secretary of the US Navy, Franklin Delano Roosevelt reportedly oversaw an 'anti-gay witch hunt' in Newport. "Information received by The Daily Telegraph ( Call for Sea Cadet inquiry after sex abuse case - Telegraph) said that Waters was caught in a compromising act with a young cadet while he was commanding the Clapton unit of the Sea Cadets in London in the early 1980s.
Reportedly, Waters was reassigned to another unit, and continued to rise up the ranks of the organisation.

Police began noticing links between the victims in those cases and other institutions on the island, including Haut de la Garenne.
Police call off Sea Cadets abuse inquiry

(http://www.dailymail.co.uk/)
There is no suggestion that Boyce has done anything improper.
Posted by Anon at 22:42