1. MI5 and police Special Branch may have been protecting the BBC's Sir Jimmy Savile and his friend and  neighbour Peter Jaconelli (above photo), the Mayor of Scarborough.

Savile operated his child abuse activities openly in Scarborough and Whitby with Peter Jaconelli the Mayor.

Peter Jaconelli was a school governor and is known to have enticed school children into prostitution and to have procured children for Savile.

Jaconelli and savile were known to cruise over to Whitby in Savile’s pink Rolls Royce in the early 1970’s and to pick up youths of both sexes from the burger bar in full view of Whitby Police Station, then take them away to be abused and paid off.

2. It has been alleged to the North Yorks Enquirer that the wider ring was smuggling paedophile images out of Yorkshire to the Netherlands, for onward sale in the Dutch sex industry.

It is obvious that they were completely protected by Scarborough and Whitby Police.

The BBC Investigation brought this out perfectly.

Amsterdam - linked to the 'Nazi-run' Bilderberg. Alan Williams, the "Welsh Witch", and Londoner Warwick Spinks managed boy brothels in Amsterdam. "Williams boasted of the day in south Wales when he had seen a 10-year-old boy on his bike, grabbed him, raped him, and, when he cried, strangled him. From Boys Clubs 21, he organised the importing of boys from Cardiff and London, inflicting intense violence on any who defied him."

3. Because of his close association with Royalty and prominent politicians, Sir Jimmy Savile will have come to the attention of the police's SO14 Royalty Protection Branch and the police's SO17 UK Parliament Division

These operate together under the Metropolitan (London) Police Assistant Commissioner for Security.

4. Savile was certainly known to the Metropolitan Police Clubs and Vice Unit which had recorded information connecting Savile to a location in South London used by criminals to commit sexual offences against children and to force them into prostitution.

Jimmy Savile (left) was friends with the military top brass.

5. Sir Jimmy Savile would have been the subject of some form of vetting when he received a knighthood, mixed with Royalty, (and stayed at the home of Margaret Thatcher, and addressed the Israeli cabinet.)

As part of any vetting process the local police in Scarborough would have been approached, probably via Special Branch.

Is it possible that North Yorkshire Police were ordered to back off Savile and his associates by MI5.

Is this why the North Yorks Enquirer journalist covering the Savile and Jaconelli story has been threatened with arrest by North Yorkshire Police?

Jimmy Savile and his friend the police inspector.

She denied that North Yorkshrie Police had any intelligence on Savile or Jaconelli.

Subsequently Chief Constable Dave Jones had to admit that intelligence did exist.

Sir Jimmy Savile was a friend of Royalty.

7. In 1983 when Leon Brittan was Home Secretary, the late Geoffrey Dickens MP gave Leon Brittan's Home Office a dossier of what he claimed was evidence of a high level paedophile network.

The Home Office now says the dossier no longer exists.

Dickens would have known of Peter Jaconelli and of his reputation.

It is entirely credible that Jaconelli was one of the prominent persons mentioned in the dossier that Mr Dickens passed to the Home Office.

It is also possible that the dossier had information on Jimmy Savile.

Dickens complained about being the subject of threats following his denouncement of Hayman.

9. According to a government whistleblower quoted in the Daily Express, police Special Branch funded the Paedophile Information Exchange.

The aim was blackmail.

Prime Minister Edward Heath with the supplier of children to the elite, Sir Jimmy Savile.

Sir Cyril Smith was a top Member of Parliament.

11. In 1964, the police were ready to arrest Churchill's close friend Lord Boothby for the sexual abuse of boys.

The boys were provided by the London gangsters Ronnie and Reggie Kray.

Lord Boothby and Tom Driberg, a future Labour Party Chairman, were friends with the Krays.

Boothby and Driberg were also intimate with Leslie Holt, one of the Kray's prostitutes, who was later murdered by the Krays.

The Police were told to back off.

Jimmy Savile in Belfast, the location of the Kincora children's home.

12. The Kincora boys home in Belfast was used as a boy brothel, allegedly run by MI5.

Reportedly MI5 used the child brothel for the blackmail of top people.

Former Attorney General Sir Michael Havers is alleged to have limited an investigation into Kincora.

In 1981, the Yorkshire Member of Parliament the late Mr Geoffrey Dickens used Parliamentary privilege to name Sir Peter Hayman, the deputy director of MI6, as a paedophile.

Havers is alleged to have participated in the decision not to prosecute the child abuser Sir Peter Hayman.

Bloody Sunday in the UK


The secret information was about the Bloody Sunday 'false flag' attack in Northern Ireland.) 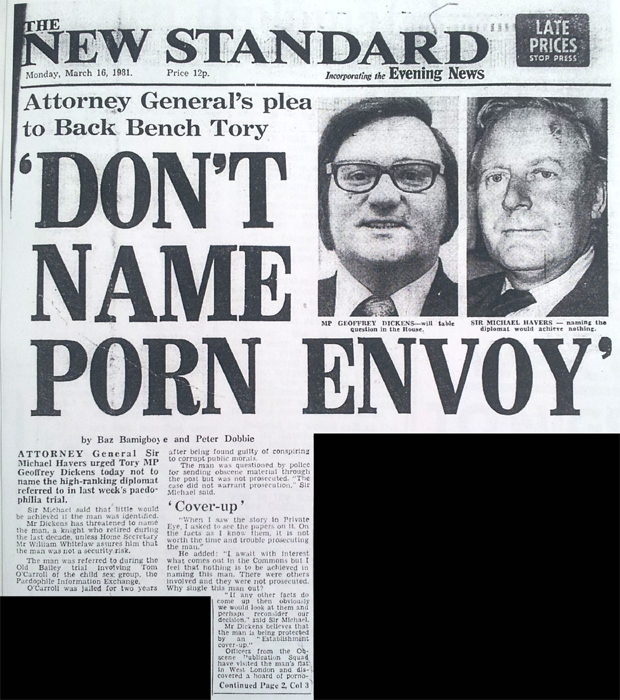 13. Derbyshire Constabulary Chief Constable Mick Creedon has revealed that, when he was serving as a Detective Sergeant in Leicestershire, he was forbidden from arresting Labour MP Greville Janner (now Lord Janner) or searching his home, despite ‘credible evidence’ that warranted further investigation.

This was a line of enquiry during the investigation into Frank Beck, the manager of Leicester children’s homes, who was convicted of abusing boys in his care.

According to Labour MP and anti-paedophile campaigner Simon Danczuk, the word went around Parliament that this must not be discussed.

14. The Daily Mirror has revealed that the Police are investigating allegations of a high level paedophile ring, involving Members of Parliament, based at the Dolphin Square flats in London.