ISLAMISTS AND PEDOPHILE RINGS - 'RUN BY THE GOVERNMENT'

The UK government runs the Islamist groups and the pedophile rings, reportedly.

The BBC reports that the UK government planned to train a 100,000-strong Islamist-terrorist army to fight alongside al Qaeda in Syria.

The secret plan to wage war on Syria's elected government was drawn up by Lord Richards, Chief of the UK Defence Staff.

The plan was revealed on the BBC's Newsnight programme.

It is believed that the ISIS terrorists currently attacking Iraq are run by the CIA and NATO.

ISIS works for the US, France and Saudi Arabia.

According to the Daily Telegraph, a Conservative politician was found by a customs officer to be in possession of hard-core child pornography videos but got off scot-free.

The top Conservative is also believed to have been a visitor to the boy brothel called Elm Guest House, which was reportedly run by MI5.

The videos and paperwork relating to the seizure have gone missing.

The top politician is said to be part of a very powerful child sex ring linked to child murders in more than one country.

It is believed that a cabal of Zionists, Nazis, Robber Barons and Mafias secretly controls the UK government, UK military and UK criminal justice system.

This cabal makes use of pedophile rings and child brothels existing throughout the UK and abroad. 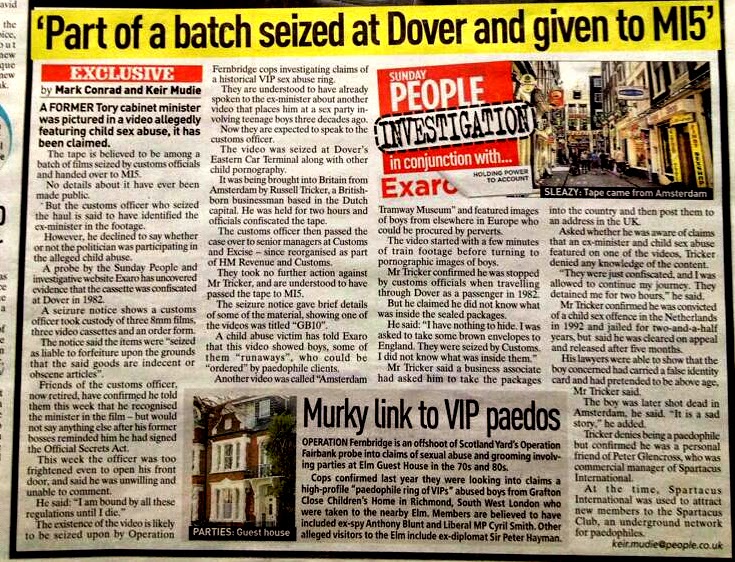 "There are examples of police covering up for paedophiles, either because THEY themselves are paedophiles, or they are friends of those who are."

"There is also some evidence to suggest that the abuse may be Satanic or Ritual Abuse based.

"This article in The Mirror, 19 January 2013 reports that MP Cyril Smith had connections with a Satanist by the name of Michael Horgan.

"Cyril Smith has also been linked with the Elm Guest House, according to this article in The Independent, 27 January 2013.

"Since the Jimmy Savile story broke, there have been several newspaper articles and a blog linking him to a Satanic paedophile ring.

"Interestingly there are similar tales of Garda in Ireland covering up paedophiles and Satanic abuse. See this newspaper front page from the Irish Daily Mirror."

Here are some testimonies from sufferers of Institutional Child Sexual Abuse:

James Reeves - Abused in the South of England.

The Outlaw - Jimmy Jones' blog, who was a victim of CSA in North Wales.

2 February 2013, The Mirror - Testimony of a victim of the Elm Guest house scandal.

"This pattern of abuse is not just limited to the UK, either. The paedophile rings are international.

"There are many cases similar to Casa Pia, in Portugal.

"Casa Pia was a state-run children's home where the inhabitants were pimped out to rich and famous paedophiles. This included some very high-up politicians, many of whom mysteriously dodged charges.

"There were also allegations in the Dutroux case (Belgium) that police and politicians were involved in a cover-up and were, in fact, members of the same paedophile ring."

There are videos available on YouTube about paedophilia in France where the children concerned knew of each other through the Zandvoort network.