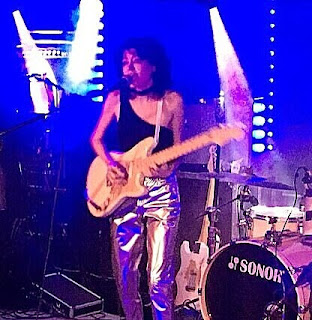 Wafah bin Laden is the niece of Osama bin Laden.

Wafah is a member of the all-female punk trio, Deep Tan, which plays gigs in London. 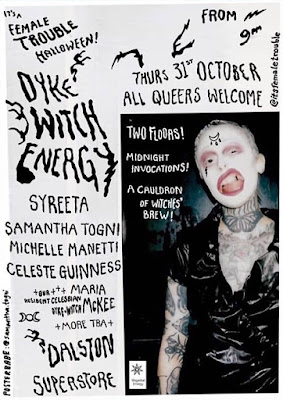 Osama bin Laden used to live in Wembley in London, when he was allegedly working with the security service MI6.

Ambrose Carey has been the head of a British security and intelligence firm.

Dana International, aka Sharon Cohen, is a Yemeni Jew.

He was the king of the Jewish kingdom of Yemen.

He is famous for killing many thousands of Christians.

When Yemen eventually became Moslem, many Yemenis only pretended to convert to Islam.

Salem, who died in a plane crash.

Salem is a Yemeni who helped the CIA at the time of Iran-Contra.

Salem is believed to be a crypto-Jew.

Playboy Salem married Caroline Carey, whose brother Ambrose is the son of the Marquess of Queensberry.

His family is heavily invested in big American corporations such as Microsoft, Merrill Lynch, Goldman and Boeing.

His family has owned a number of palatial properties in the USA.

Quoting a French intelligence report posted by PBS Frontline, The New Yorker reported, "During the nineteen-eighties, when the Reagan administration secretly arranged for an estimated $34 million to be funneled through Saudi Arabia to the Contras in Nicaragua, Salem aided in this cause."

Wafah Dufour, an American rock singer, socialite and lingerie model, is from the same Yemeni family as Salem.

She has a masters degree from Columbia Law School in New York.

Osama bin Laden, according to the newspaper Scotland on Sunday, 16/9/ 2001, made his fortune in part by working with Jewish-Russian mafia operations in Qatar and Cyprus.

Osama reportedly established branches of his business in the Cayman Islands; and he reportedly employed law firms

and consultants connected to Langley, Virginia and the CIA. (CIA)

Osama was reportedly a guest of British Intelligence in London in 1996. (CIA)

Among Osama's schoolfriends were the Kashoggi brothers.

In July 2001, while Osama was being treated for a kidney ailment at the American Hospital in Dubai, Osama met with a top American CIA agent called Larry Mitchell.

Salem's brother's son, Omar, married Jane Felix-Browne, who has a £550,000 home in the village of Moulton, in the UK.

In July 2010, Jane Felix-Browne told the media that Omar is bipolar and that he was in a Qatari mental institution.

Hamza is one of the sons of Salem's famous brother.

Allegedly, "Hamza, while in hospital, after the Boston Bombing, was visited by Michelle Obama."

According to Prof David Ray Griffin, Jean Sasson's 1991 book, The Rape of Kuwait, helped create American support for the US invasion of Iraq. (Bin Laden Figure is not Osama bin Laden)

Reportedly, from 1991 to 1996, Omar was with Osama in Sudan, and then in 1996 Omar traveled with Osama to Afghanistan.
Reportedly, Omar left Osama and his group in 2000.
Omar now lives in Qatar.
Omar married Zaina, a British grandmother nearly twice his age.
In July 2010, it was reported that Omar had mental problems.
Zaina split with Omar and Omar entered a mental hospital.

Osama bin Laden's neice. (THE BIN LADEN FAMILY
/ OSAMA BIN LADEN)
On 20 January 2010, at Rolling Stone,9Guy Lawson wrote about Osama's Prodigal Son
In Syria, Lawson and Omar visit a nightclub called Les Caves de Boys where Moslems drink whiskey and watch Russian strippers.
According to Lawson, Omar, as a child in Afghanistan, befriended the teenage sons of men who plotted bombings.
According to Omar's memoir, one of Omar's closest friends was raped by a group of men.
"The rapists added insult to the attack and injury by snapping photographs of the young man during and after the rape," Omar writes in his memoir.

According to the memoir, Ayman al-Zawahri, Osama's top deputy, got hold of the photos and concluded that Omar's young friend was gay.
According to the memoir, Omar's young friend was dragged into a room with Zawahri, who shot him in the head.
Omar tells Rolling Stone: "No one could control me. That is why my father was always taking me with him. I was his chosen son. I was my father's favorite."

In 1996, aged 15, Omar was reportedly still in Afghanistan.
Meanwhile, according to Rolling Stone, "his cousins in Jeddah had Jet Skis and weekend trips to London and Beirut; they had whiskey, women, freedom."
After the US invasion of Afghanistan, videotapes were allegedly found in Osama's base.
Allegedly, the videos showed puppies being painfully killed to test chemical weapons.
According to Omar's memoir, the puppies had been born to Omar's favorite dog.
In his memoir, Omar says he wept when he learned that his puppies had been killed.
This smells like CIA propaganda bullshit.

THE BIN LADEN FAMILY / OSAMA BIN LADEN
Omar makes it clear that not everything in his memoir is accurate!
According to the memoir, Omar confronts Osama about suicide bombers.
According to Rolling Stone: "Omar appears confused. 'It says that in the book?... It was not like that," he insists... In Omar's world, it appears, it is possible to be misquoted in your own autobiography."
Rolling Stone and Omar travel to Beirut
Omar's uncle owns the Hard Rock Cafe on the Corniche.

Salem bin Laden (The bin Laden Family).
Quoting a French intelligence report posted by PBS Frontline, The New Yorker reports, “During the nineteen-eighties, when the Reagan administration secretly arranged for an estimated $34 million to be funneled through Saudi Arabia to the Contras in Nicaragua, [Osama’s eldest brother] Salem bin Laden aided in this cause.” [PBS Frontline, 2001; New Yorker, 11/5/2001]
~~

Did the Pakistan military get too close to a CIA safe house?
Did the Pakistan security services get involved in a fight at the CIA safe house and then discover members of bin Laden's family being housed there?
Did the US military then arrive on the scene to remove the evidence and concoct a story to cover its involvement with al Qaeda?
Former Pakistan President Pervez Musharraf's 2004 autobiography talks about an Al Qaeda (CIA) safe house in Abbottabad. (Musharraf knew of Abbottabad safe house?)
An ISI official told the BBC the compound in Abbottabad where Bin Laden was allegedly killed had been raided in 2003. (Bunny Laden.)
Pakistan’s spy service (ISI) had been sharing information about the Abbottabad compound with the CIA since 2009 and had continued to do so until mid-April. ( Pakistan 'shared information about compound ...‎)

A Cobra helicopter belonging to the pakistan military
According to Pakistani Urdu TV channel Geo News (killed in Abbotabad near Islamabad of Pakistan):
Pakistani intelligence officials said that a Pakistani army helicopter was shot down in Abbottabad and then a search operation was launched by Pakistani forces.
At about 1:20 a.m. local time a Pakistani helicopter was shot down by unknown people in the Sikandarabad area of Abbottabad.The Pakistani forces launched a search operation in the nearby area and encountered a group of unknown armed people.
An exchange of fire followed between the two sides.
When the exchange of fire ended, the Pakistani forces arrested some Arab women and children as well some other armed people.
Two U.S. helicopters flew to the site and carried away a dead body
Initial reports said that at least one was killed and two others were injured in the crash.
At least two houses were engulfed by the huge fire caused by the crashed chopper.
~~
"The CIA's Larry Mitchell met Osama in an American hospital in 2001"
~~
"U.S. officials have said that Pakistani officials were not told about the early morning helicopter raid until the strike team had killed Bin Laden and had returned to Afghanistan from where they took off, citing security reasons.
"Many Pakistanis were surprised at how this was possible, especially when initial reports stated that the choppers took off from a Pakistani air base." (Bunny Laden.)
~~

"I used to go to their house. He had two wives, one spoke Arabic, and the other one spoke Urdu. They had three children, a girl and two boys. They gave me two rabbits."
Bunny Laden.
~~
U.S. officials have listed a number of points that they claim prove the dead man is Osama bin Laden:
DNA taken from 'the brain of Osama bin Laden's sister following her death from brain cancer' was a 99.9 per cent match to that of Osama.
A woman, 'believed to be one of bin Laden's wives', confirmed bin Laden was the dead man.
The CIA said they compared photos of bin Laden's body with known photos of him and were 95 per cent sure that they showed the same man.
The burial from an aircraft carrier in the North Arabian Sea was videotaped aboard the ship, according to a senior defence official.
All sounds like a lot of CIA lies?

aangirfan: MISSING: KIN OF MEN KILLED BY CIA'S DAVIS
~~
A Pakistani police officer says the mansion was owned by an Afghan national called Arshad Khan.
He added: "There were several members of the bin Laden family inside the compound who have been taken into custody.
"One of them was his daughter Safia." (Osama bin Laden: Neighbours shocked to be living next to world's ...)
"Unidentified males who survived were flown from the scene, while four children and two women, including Bin Laden’s daughter Safia, were taken away in an ambulance.
"It is believed his youngest wife Amal al-Sadah was also taken into custody."
~~~

According to Hamid Mir, 3 May 2011 (The Osama bin Laden I knew):
Osama "was hiding in Abbottabad with one of his wives, a son and a daughter...
"His 10-year-old daughter Safia watched American commandos entering the house, who took away the dead body of her father.
"She confirmed later: 'The Americans dragged the dead body of my father through the stairs'."
Hamid Mir is spouting CIA propaganda?

A scene from the film Blackhawkdown
~~
"His youngest wife, Amal al-Sadeh, 27, with whom he reportedly had a number of children, was shot in the leg during yesterday's attack.
"The al Qaeda chief's beloved youngest son, Hamza, 18, and another son, 22-year-old Khalid, were also said to have been killed."

(The loyal sons of Osama Bin Laden - and the many relatives who ...)
~~
"White House counterterrorism adviser John Brennan told reporters Monday that bin Laden's son Khalid was killed in the raid.
"When the White House released a transcript of Brennan's briefing, it substituted the name of a different son, Hamza...
"Brennan said bin Laden's wife died while shielding the terrorist leader from U.S. gunfire.
"Carney said Tuesday that the wife hadn't died and was merely shot in the leg, although another woman did die. But it wasn't clear that either of them was trying to shield bin Laden.
"Brennan and other officials suggested that bin Laden was holding a gun and even firing at U.S. forces. Carney said Tuesday that bin Laden was unarmed." (White House Struggles to Get Story Right )
~~
Lord Milo Douglas, the Bin Ladens and Gay Affairs.
THE BIN LADEN FAMILY
OSAMA BIN LADEN
11 WHISTLEBLOWERS
9 11 Planning
9 11 REVEALED - The Daily Mail
CRIMINALS IN CONTROL; BCCI, GANGSTERS & 9 11
WILL THE 9 11 PERPETRATORS FALL OUT?
9 11 Was An Inside-Job!
9 11 VICTIMS - FAKERY?
Posted by Anon at 05:00