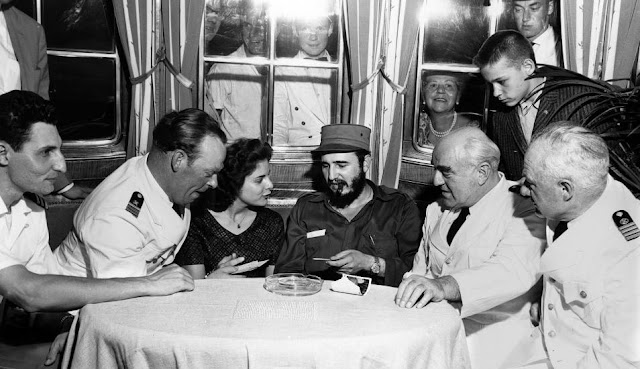 Marita Lorenz (on the cruise ship captained by her father) with Fidel Castro in Havana in 1959.

2. 'Is linked to a 1960 assassination attempt by the CIA on Castro's life.

3. 'Was involved with Frank Sturgis, and E. Howard Hunt  shortly before the JFK assassination.' 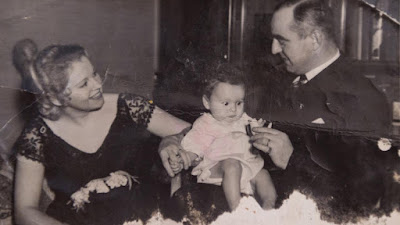 Heinrich Lorenz, his wife Alice and their daughter Marita, born in 1939.

Marita Lorenz was the daughter of Alice  Lofland and Heinrich Lorenz.

Alice Lofland, born in Delaware, was an actress and dancer who performed under the stage name June Paget.

Marita Lorenz's motherAlice was a spy, and there is evidence that her father Heinrich was a spy.

The Story of Marita Lorenz 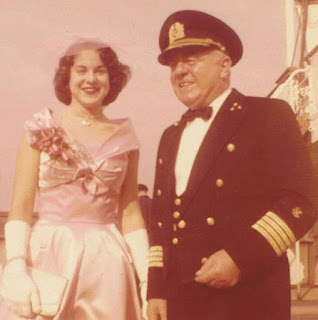 Marita and her father.


During World War II, Heinrich Lorenz was the commander of a fleet of Nazi U-boats.

In 1944, Marita Lorenz, aged 5, and her mother Alice, reportedly spent time in the Bergen-Belsen concentration camp.

'In the camp she met Anne Frank.'

After World War II, Alice worked for U.S. Army intelligence and later the O.S.S., the forerunner of the C.I.A. 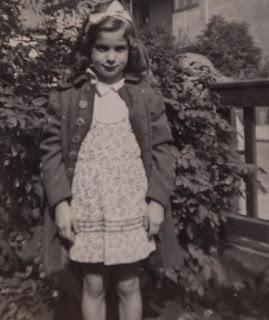 
In 1946, at the age of seven, Marita was raped by a 'deranged' American soldier.

"She was raped at the birthday party of a friend."

In 1950 the family moved to the USA and eventually settled in Manhattan.

As a teenager, Marita worked on her father's cruise ships.

In February 1959, weeks after the conclusion of the Cuban Revolution, 19-year-old Marita Lorenz arrived in Havana with her father on board of the MS Berlin.[3] 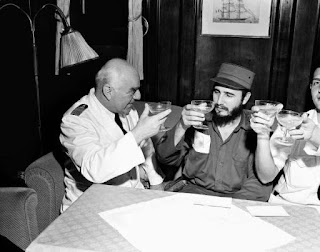 Before long, Marita Lorenz was staying with Fidel Castro at his flat in the Havana Hilton.

She lived with Castro for several months and became pregnant.

"Israel is ... one of the leading foreign investors in Cuba, with private Jewish businessmen involving themselves in everything from Cuban citrus exports to real-estate projects."

Castro is a Sephardic Jew.

Rafi Eitan, the Israeli spymaster, "is Castro's business partner and the largest land-owner (of stolen land) in Cuba.

In April 1959, Castro flew to the USA, hoping to become friends with President Eisenhower and the USA.

'Nixon was quite rude with him,' said Marita Lorenz. 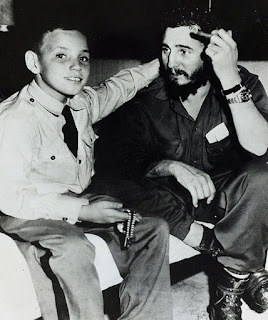 Castro with his son Fidelito, in Havana, circa 1960.

Marita Lorenz then joined anti-Castro activists in Florida, worked for Frank Sturgis of the CIA, returned to Cuba, allegedly with poison pills, and told Castro about the alleged plot to poison him.

According to MaritaLorenz, Sturgis worked for the mobster Meyer Lansky until 1957, when he switched to supporting Castro.

Sturgis was recruited to the CIA in 1958.

Castro got Sturgis to operate the casinos, and made him chief of air-force intelligence.

In 1959, Sturgis recruited Marita Lorenz as a spy.

The Story of Marita Lorenz 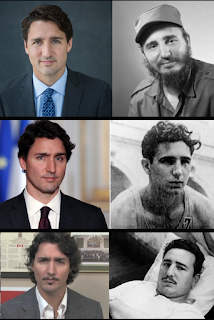 Castro was being protected by powerful people.

Marita claims that Pérez Jiménez fathered a child with her.[6] 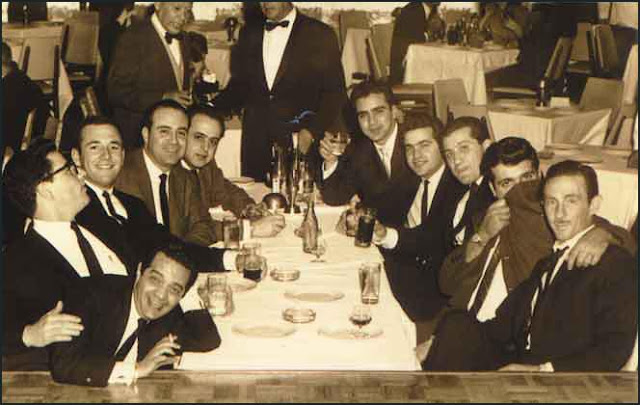 Members of Operation 40, a CIA sponsored hit squad in the 1960s, was a 'mixed group of Cuban exiles, Italian mafia, and military intelligence types.' Created under Eisenhower in 1960, controlled by Vice President Nixon, and funded by George HW Bush. Frank Sturgis is the man hiding his face with his jacket. Operation 40 has been implicated in the assassination of JFK, CIA drug trafficking, Watergate and the 9/11 cover up.

In 1963, Marita was with Frank Sturgis at a meeting with the CIA head in Miami which also included E. Howard Hunt.

2. She met him again before the Kennedy assassination in 1963 in the house of Orlando Bosch, with Frank Sturgis, Pedro Luis Díaz Lanz, and two other Cubans present.[9]

She stated that she joined the men traveling to Dallas in two cars and carrying "rifles and scopes", but flew back to Miami the day after they arrived.[9]

7 Mar 2013 - Both Hitler and Castro surrounded themselves with gay people. ... "Despite the fact that not all Jews are Zionists, nor all Zionists are Jews, any ...

24 May 2014 - Apparently, Fidel Castro is gay, Jewish, very wealthy and an agent of the CIA. .... Both Hitler and Castro have Jewish origins. Gay? Of Course!


FIDEL CASTRO OF THE CIA - aangirfan

6 Dec 2012 - Rafi Eitan, the Israeli spymaster, "is Castro's business partner and the largest land-owner (of stolen land) in Cuba. "Israel is ... one of the leading ...

6 Mar 2013 - FIDEL CASTRO OF THE CIA killed Chavez, according to one conspiracy theory. According to Cuban born American writer Servando Gonzalez:.