Beijing has accused the United States of inciting the increasingly unruly protests in Hong Kong.

Civil Disobedience in Hong Kong or US Color Revolution Attempt? 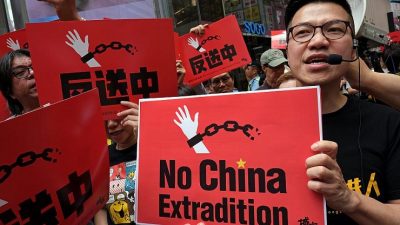 What’s been going on for months in Hong Kong has all the earmarks of a US orchestrated color revolution, aimed at destabilizing China by targeting its soft Hong Kong underbelly.

China’s soft underbelly in Western-oriented Hong Kong left it vulnerable to what’s going on. US dirty hands likely orchestrated and manipulated pro-Western 5th column elements behind months of anti-Beijing protests.
Dubbed Occupy Central, China’s leadership is well aware of what’s going on and the high stakes. Beijing is faced with a dilemma.
Cracking down forcefully to end disruptive Hong Kong protests could discourage foreign investments. Letting them continue endlessly can destabilize the nation.
US war on China by other means aims to marginalize, weaken, contain, and isolate the country — because of its sovereign independence, unwillingness to bend to US interests, and its growing political, economic, financial, and military development.
China’s emergence as a world power threatens Washington’s aim to control other countries, their resources and populations worldwide.
Its successful economic model, producing sustained growth, embarrasses the US-led unfair, exploitive Western “free market”  system.
The US eliminated the Japanese economic threat in the 1980s, a similar one from the Asian Tiger economies in the 1990s, and now it’s China’s turn to be taken down.
Its leadership understands what’s going on and is countering it in its own way. China is a more formidable and resourceful US adversary than earlier ones.
Its strategy includes taking a longterm approach toward achieving its objectives with plenty of economic and financial ability to counter US tactics.

Mitchell Gore‏@lestatdelc
Trump admired the Tiananmen Square crack-down...
It may become the first post-WW II nation to defeat Washington’s imperial game, making the new millennium China’s century in the decades ahead.
US strategies to control other nations include preemptive wars of aggression, old-fashioned coups, and color revolutions — what appears to be going on in Hong Kong.
This form of covert war first played out in Belgrade, Serbia in 2000. What appeared to be a spontaneous political uprising was developed by RAND Corporation strategist in the 1990s — the concept of swarming.
US vs. China: A Clash of Civilizations?
It replicates “communication patterns and movement of” bees and other insects used against nations to destabilize and topple their governments.
The CIA, (anti-democratic) National Endowment for Democracy (NED), International Republican Institute (IRI), National (undemocratic) Democratic Institute, and USAID are involved.
Their mission is disruptively subverting democracy and instigating regime change through labor strikes, mass street protests, major media agitprop, and whatever else it takes short of military conflict.
Belgrade in 2000 was the prototype test drive for this strategy. When subsequently used, it experienced successes and failures, the former notably in Ukraine twice — in late 2004/early 2005, again in late 2013/early 2014.
US color revolution attempts have a common thread, aiming to achieve what the Pentagon calls “full spectrum dominance” — notably by neutralizing and controlling Russia and China, Washington’s main rival powers, adversaries because of their sovereign independence.
Controlling resource-rich Eurasia, that includes the Middle East, along with Venezuelan world’s largest oil reserves, is a key US imperial aim.
Swarming tactics are being used in Hong Kong. According to RAND strategists John Arquilla and David Ronfeldt, it’s war by other means.
It exploits the information revolution and social media to take full advantage of “network-based organizations linked via email and mobile phones to enhance the potential of swarming.”
In 1993, Arquilla and Ronfeldt explained that “warfare is no longer primarily a function of who puts the most capital, labor and technology on the battlefield, but of who has the best information” and uses it advantageously.
State-of-the art IT techniques use “advanced computerized information and communications technologies and related innovations in organization and management theory,” they explained.
Information technologies “communicate, consult, coordinate, and operate together across greater distances.”
Cyberwar today is what blitzkrieg was to 20th century warfare, involving “irregular modes of conflict, including terror, crime, and militant social activism.”
Both strategists believed swarming could “emerge as a definitive doctrine (to) encompass and enliven both cyberwar and netwar.”
They called swarming a way to strike from all directions in an overwhelming fashion, believing what works in combat theaters can be effective in waging war by other means in cities.
The strategy appears to be in play against China by targeting Hong Kong.
On August 12, Beijing’s official People’s Daily broadsheet said the city “is not and shall not be the frontline of US and China,” adding:

“Hong Kong has been rocked by chaos and violence for weeks, and the violence is getting more and more intense.”
“What is going on in Hong Kong? There is already evidence of interference by foreign forces.”
“As Chinese officials have pointed out, the situation in Hong Kong bears the features of a (US-orchestrated) color revolution.”
“US politicians have openly supported the unrest, and anti-China forces are working behind the scenes.”
“(T)he US government often uses democracy promotion to attack other countries, and China has always been a major target.”
“Some US politicians dream of making China look and act more like the United States. One reason we are seeing increased pressure on China is because those who have tried to change China over the years via other methods have failed and there is growing fear that China is getting too powerful, so the Uncle Sam will never miss any opportunity to undermine China.”
“…Hong Kong is Chinese territory. This means that the city is not and shall not be a playground for anti-China forces.”
“China is no longer a poor and weak country that cannot stand up to foreign interference.”
“The country has enough methods and strength to quickly quell the unrest and smash foreign plots when such actions are deemed necessary to protect national sovereignty and the prosperity and stability of Hong Kong.”

Beijing will deal with what’s going on in Hong Kong in ways it believes are most effective.
US destabilization and other hostile tactics make resolving major bilateral differences all the harder.
If Trump regime anti-China hardball tactics accelerate already weakening global economic conditions, including in the US, DJT could end up a one-term president.
Strengthened Sino/Russian unity is better able to counter hostile US actions — a vital anti-imperial alliance US strategists fear.
Posted by Anon at 23:55