The rock above is supposed to be a piece of moon rock, picked up from the moon by Neil Armstrong, Michael Collins and Edwin 'Buzz' Aldrin.

It was given was given to the Dutch during a global tour by the three apollo 11 astronauts.

Curators at Amsterdam's Rijksmuseum discovered that the rock was in fact petrified wood.

"It's a nondescript, pretty-much-worthless stone," said Frank Beunk, a geologist involved in the investigation.

"The astronauts were removed from the ship moments before takeoff, flown to Nevada, where, a few days later, they broadcast the moon walk from the desert.

"People claimed to have seen Armstrong walking through a hotel lobby, a show girl on each arm. Aldrin was playing the slots.

"They were then flown to Hawaii and put back inside the capsule after the splash down but before the cameras arrived." 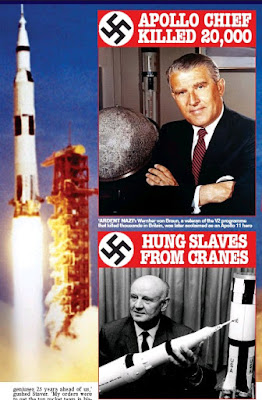 Murderous Nazis were the key people in NASA.

More than 130 German scientists were employed on the design and production of the fake Apollo 11 Moon landing.

The German rocket scientists were not nice people.

Arthur Rudolph would hang slave labourers if they did not work hard enough.

He later had a key role in the Apollo programme.