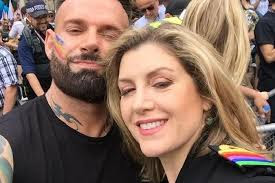 Penny Mordaunt is a right-wing UK Conservative who wants to take a tough line on Iran.

Above, we see UK Defence Secretary Penny Mordaunt, with her brother, James, at the London Gay Pride event.

In 2013, when Mordaunt  delivered a speech in the House of Commons, she used the word "cock" several times.

This was said to be a forfeit for a misdemeanour during Naval Reserve training.[29][30]

She used the word "cock" six times and "lay" or "laid" five times. 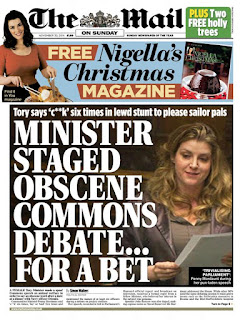 To pay her way through sixth-form college, Mordaunt became a magician's assistant to Portsmouth magician Will Ayling, who was once president of The Magic Circle.[15]

Mordaunt is a Royal Naval Reservist, serving as a sub-lieutenant, at HMS King Alfred on Whale Island.[48][49]