Peter May was expelled - from Eastwood High School in posh Newton Mearns in Glasgow - and ran away to London.

"After a month of sleeping in Euston station in the same clothes and singing for their supper, the boys cracked...

"As well as his miserable month in London, May also chose to intertwine darker elements of his own experiences in Runaway.

"A sinister character in the book called Doctor Roberts was based directly on a manager he had back in Glasgow, who attempted to seduce each of the boys individually."

Peter May: returning to a runaway youth

Jon Whiteley, by age 11, had won an Oscar, and had twice starred alongside Dirk Bogarde.

"Bogarde once said on live television that he had wanted to adopt Whiteley - who was watching with his mother at the time - though 'she wasn’t paying attention, which was just as well.'"

In the BBC's Huntingtower, the part of Wee Jaikie was played by the child actor Eric Cullen.

Eric Cullen was born in1965 in Scotland. 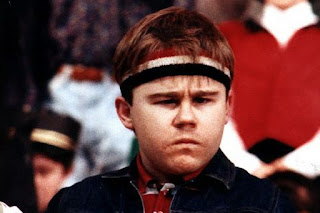 Cullen dedicated himself to campaigning against child pornography, and to trying to bring his abusers to justice.[6]

Of the three men he named as his principal abusers one, Francis Currens, was jailed during Cullen's lifetime; one, Cullen's uncle Jack Williams, was jailed after his death (both of them for sexual offences including the repeated rape of young boys);[7] and as of summer 2006 one, whom Cullen named as the ringleader, has never been prosecuted.[2]

Zavaroni was 'discovered' in the summer of 1973.

In 1974 Zavaroni appeared on Opportunity Knocks hosted by Hughie Green.

How close was Zavaroni to Hughie Green?

Zavaroni  sang at a Hollywood charity show with Frank Sinatra in 1974.

Zavaroni performed at the White House for US President Gerald Ford.

In 1989, Zavaroni's mother, Hilda, died of a tranquilliser overdose and a fire destroyed all of her show business mementos.[3]

"By the age of 14 Freddie had a drug problem.

"Travelling to South America, he ended up homeless and drug addicted living on the streets of Peru’s capital, Lima.

"Freddie is now an apprentice shaman and says the Amazonian plant medicine Ayahuasca has cured him of his addiction."

It Doesn't Happen to People Like Me - Foreign Correspondent - ABC