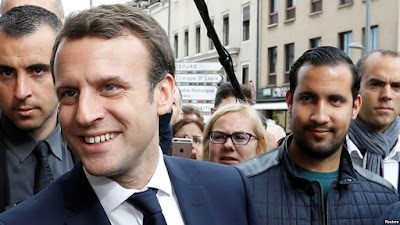 On 18 July 2018, the newspaper Le Monde identified him in footage as the person wearing a police helmet who beat up a young protester during the 2018 May Day demonstrations in Paris.

Benalla has been filmed beating up people and was at first very lightly treated by Macron. Now a scandal is sweeping over France, with Benalla accused of tampering with evidence.

Macron had made young Benalla a Lieutenant-Colonel in the Gendarmerie, with 'secret' security clearance, and anticipating a lead future role for him 'guarding' Macron.

It is reported that Benalla's monthly wage was 10 thousand euros, and with fancy government lodgings and a chauffeur-driven car.

Benalla is sad to have had keys to the Macron home in Le Touquet in northern France. Very special privileges for a young man.

Benalla is said to be tied to the Masonic lodges 'Grand Orient' and 'Emir Abdel Kader' linking Islam and the Freemasons. Benalla is associated with Karim Achoui, linked to Islamic radicals.

Is the 'Deep State' in Europe starting to take down or menace Macron?