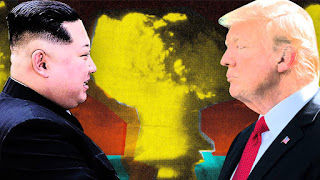 "A successful Trump-Kim summit could be the prelude to war with Iran.

"When the real negotiations bog down later - as they inevitably will - and even if they end in acrimony, Kim has total immunity for as long as it seems diplomacy has a chance."

A successful Trump-Kim summit could be the prelude to war with Iran.

"A world of shadows, secrecy, and lawlessness now characterizes a deep state that is ruthless in its pursuit of wealth and power and indifferent to its plundering of both humanity and the planet."

"The status quo is increasingly held in place by a culture of fear, a pedagogy of repression, a banal celebrity culture, game show aesthetics and a politics of precarity, control and mass surveillance."

"Marshall is the leading aviation expert on the September 11th attack, as well as a masterful storyteller.

"In his final book The Big Bamboozle: 9/11 and the War on Terror, a 2012 publication Marshall theorized it wasn't al-Qaida but rather U.S. and Saudi government officials who orchestrated 9/11.

"In February 2013, he was found dead along with his two children in their home in California. Reports indicate all 3 died of gunshot wounds. Police regarded the case as a double murder- suicide case. But many pieces do not add up. Simply, a loving father and devoted husband would kill his children before turning the gun on himself. Besides, prior to his death, he had confided to his closest that he was terrified of his family being targeted by secret agents."