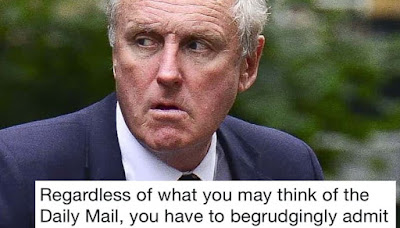 Paul Dacre is stepping down

From November 2018, Paul Dacre will no longer to be the editor of the Daily Mail.

Dacre became editor of the Daily Mail in 1992.

At university, Paul Dacre identified with the liberal end of the political spectrum on issues including gay rights .

Dacre spent some time as a journalist in the USA, and his mind was changed on politics. 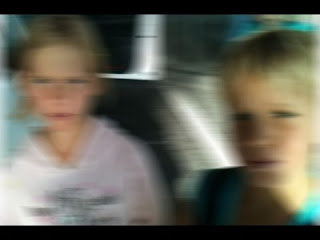 Paul Dacre was educated at University College School, an independent school in Hampstead, a London borough associated with Tavistock, Freud, child abuse and the Kosher Nostra. 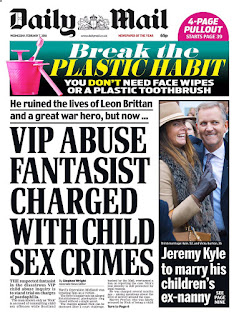 When it comes to child abuse rings, The Daily Mail, under Dacre, has attacked Sir Cyril Smith, a Liberal, and defended Sir Leon Brittan, a Conservative and a Jew. 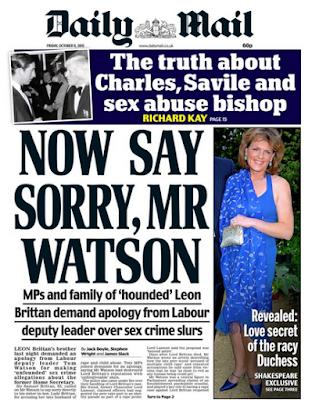 Dacre's London home is in Belgravia.

For his other properties, a large farm in West Sussex and the 17,000-acre Langwell Estate near Ullapool in the Scottish highlands,[37] Dacre has benefited from subsidies under the Common Agricultural Policy from the European Union.

"Dacre retires to spend more time with his EU grants on his Scottish estate and bronzing his corpulent frame in his fourth home in the British Virgin Islands." 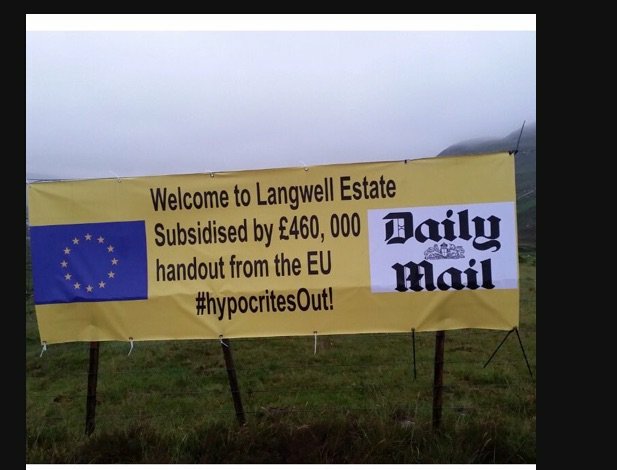 The UK's Daily Mail comes up with some of the very best news stories.

Here's one: academics claim 9/11 was 'inside job' Mail Online

It was the UK's Daily Mail which 'falsely' reported that former child star Mark Lester had allowed his son to share a bedroom with Michael Jackson.

However, the Mail championed the case of Stephen Lawrence, a black teenager who was murdered in a racially motivated attack in Eltham, London in April 1993.

The Mail broke with the establishment media consensus over the 2008 South Ossetia war between Russia and Georgia.

The Daily Mail in Ireland.

The Daily Mail is the the United Kingdom's second biggest-selling daily newspaper.

It is very much 'on the ball' and produces some of the best news stories.

The publisher of the Mail is the Daily Mail and General Trust .

The Mail has the third-largest circulation of any English language daily newspaper and one of the highest in the world.[4].

The Mail is not owned by Americans or Jews.

Sometimes the Mail appears to contain establishment propaganda; but sometimes it spills the beans.

"Planes that vanished then mysteriously reappeared, and crucial evidence that has been lost for ever...

"The plot by America’s military bosses was devilish in both design and intent – to fabricate an outrage against innocent civilians, fool the world and provide a pretext for war.

"In the pentagon, a top secret team drew up a plan to simultaneously send up two airliners painted and numbered exactly the same, one from a civil airport in America, the other from a secret military airbase nearby.

"Somewhere along their joint flight paths, the passenger-carrying plane would drop below radar height, and disappear, landing back at the airbase and unloading its occupants in secret.

"Meanwhile, the drone would have taken up the other plane’s designated course. High over the island of Cuba, it would be exploded in mid-air after broadcasting an international distress call that it was under attack from enemy fighters.

"The world would be told that a plane load of blameless American holidaymakers had been deliberately shot down by Fidel Castro’s Communists – and that the US had no choice but to declare war and topple his regime.

"This ‘agent provocateur’ plan – code named OPERATION NORTHWOODS and revealed in official archives – dates from 1962 when the Cold War was at its height.

"Four decades later, there are a growing number of people who look back at this proto-conspiracy and then to the events of 9/11 and see uncanny and frightening modern parallels.

"For Cuba, read Iraq... For the dummy airliner, read the Twin Towers in New York...."

Video made for the mock training exercise?

On 4 July 2009, the UK's Daily Mail newspaper has this headline:

Conspiracy fever: As rumours swell that the government staged 7/7, victims' relatives call for a proper inquiry

The Mail asks: which train did the four Muslims catch from Luton to London on the morning of the bomb blasts?

The three separate Tube explosions at Edgware Road, Aldgate and King's Cross occurred together at exactly 8.50am.

The official reports said the bombers got on the 7.40am train from Luton.

However, the 7.40am train never ran that morning.

Survivors pointed out the error.

The Government then changed its mind and said the bombers caught the 7.25 am from Luton, for the 35-minute journey to King's Cross.

It was due to arrive in the capital at 8am.

However, this train ran 23 minutes late.

It arrived in London at 8.23am, say station officials.

The three separate Tube explosions at Edgware Road, Aldgate and King's Cross occurred together at exactly 8.50am.

It looks as if it would be impossible for the 'bombers' to get to their different destinations in time.

Reportedly, it takes seven minutes to walk from the Thameslink line station to the tube station at the main King's Cross station.

Police say the four men were seen on the main King's Cross concourse at 8.26am, although no CCTV footage has ever been made public.

How had the men got there in three short minutes after getting off the Luton train at 8.23am?

Controversially, no CCTV images have been released of the alleged bombers actually in London.

There is a picture claiming to show the 'bombers' in Luton. In this Luton image "the quality is poor and the faces of three of the bombers are unidentifiable."

This photo is timed at four seconds before 7.22am.

The men would have had just three minutes to walk up the stairs at Luton, buy their £22 day return tickets and get to the platform, which was packed with commuters because of the earlier travel disruptions.

A video called Ripple Effect accuses Tony Blair, and elements of the Government, the police, and the British and Israeli Secret Services of carrying out the London Tube bombings.

It is alleged that the four British Muslims were tricked into taking part in what they were told would be a mock anti-terror training exercise.

The Ripple Effect video claims government agents set off pre-planted explosives under the three Tube trains and on the bus.

It suggests that the four Muslims were not on any of the Tube trains.

Dr Mohammad Naseem, the chairman of Birmingham's Central Mosque, says: 'We do not accept the government version of July 7, 2005. The Ripple Effect video is more convincing than the official statements.'

Naseem has said that the identities of the bombers were discovered by the police suspiciously quickly.

'When a body is blown up, it is destroyed. How is it that the identification papers found at the bomb scenes of these men were still intact? Were they planted?'

Why did the four bombers get return tickets to London if they were on a one-way suicide mission?

Why are there no CCTV images of the four together in London even though the city has thousands upon thousands of such cameras in public places?

Why did so many survivors of the Tube bombings say that the explosions came upwards through the floor of the trains, not down, as would be the case if a backpack blew up inside?

And why do no passengers on the London-bound Luton train clearly remember the four bombers with their huge rucksacks on that fateful morning?

There was a mock terrorist exercise going on in London that day.

Former Scotland Yard officer Peter Power said on BBC radio: 'At half-past nine this morning we were running an exercise for a company of over a thousand people in London based on simultaneous bombs going off precisely at the railway stations where it happened this morning, so I still have the hairs on the back of my neck standing up.'
Posted by Anon at 10:48