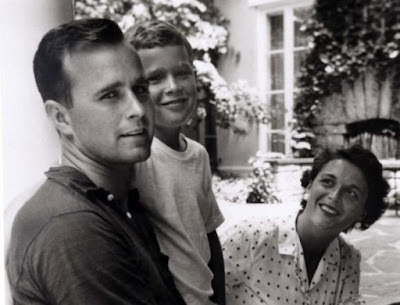 George W. Bush is shown with his father, George Bush and mother, Barbara Bush in1955.

"Barbara Bush is described by her closest intimates as prone to 'withering stares' and 'sharply crystalline' retorts.

"She is also extremely tough.

"When he was seven, Bush's younger sister, Robin, died of leukaemia and several independent witnesses say he was very upset by this loss.

"Barbara claims its effect was exaggerated but nobody could accuse her of overreacting: the day after the funeral, she and her husband were on the golf course."

The Bush family were business partners with the bin Ladens.

Bush Family - Slavery and sex slaves.
George W. Bush's great-great-great-great-grandfather, Thomas Walker, was a slave trader.
"There could not possibly have been a more inhuman monster than this Walker.
"Many a poor seaman has been brought by him to an untimely end."
In 1797, his own crew mutinied, shot him dead and threw him overboard.
Read more: http://www.dailymail.co.uk/

Brice Taylor, in her book, writes that George H W Bush was a child abuser.

"Over the years, Kelly was closely tied into the trauma I received.

"Repeatedly she was tortured and traumatized in front of me in an effort to keep me in line.

"Her torture fragmented her psyche in order to create multiple personalities within her, so she could follow in my footsteps for later use as a 'presidential model' ...

"George Bush, was/is a pedophile and Kelly was created to be, as I later found out from a renegade CIA operative, what was called a 'Bush Baby.'"

Cathy O'Brien describes how she and her daughter were hunted like animals - by George Bush - on Bob Hope's Jordan Ranch.

What about some other presidents?

Thanks For The Memories - The Truth Has Set Me Free! /
File:Thanks for the Memories.pdf - WikiSpooks

Bush and a scout.

"One of Bush's alleged former boyfriends, Anthony Berusca (class of '70), told The Dallas Morning News that Bush was 'deeply conflicted about being gay, even somewhat self-hating'...

"Bush claimed to be straight, born again, and engaged to Laura Welch.

"Kitty Kelly in THE FAMILY wrote that Bush's twin daughters were not his offspring, but from a donor at a fertility clinic.

"Drama club and cheerleading are where the gay boys hang out.

"George earned the nickname Lips Bush for his skill at giving blow jobs to his fraternity buddies, according to Kitty Kelley.

"Bush has gay-style excrement nick names for the people he hangs out with: 'Turdblossom' term for Karl Rove.

"Note the classic juxtaposition of the obscene with the feminine to come up with a nickname for a gay man.

"For example, the late David Lewis went under the name Sally Suckemsilly.

Firestarter comments as follows:
In the 1980s there was a massive child abuse ring which involved George H.W. Bush and Satanist Michael Aquino.

The Franklin affair started in 1988 with some 40 million dollars embezzled by the Franklin Credit Union.

During the investigation a large amount of child pornography was found, including some with high officials.

At the end of the 1980s some 80 young people testified they had been sexually abused. This includes information on sex abuse at the Bohemian Grove and Colonel Michael Aquino.

This affair was described in a number of books, notably “The Franklin cover-up” of John DeCamp (please note that DeCamp is part of the cover-up):

Child victim Paul Bonacci testified that at 6 years old he became part of the group that was sexually abused by (the customers of) Larry King and Alan Baer.

Bonacci was sexually abused at Bohemian Grove in California (not named in DeCamp’s book), where he witnessed the murder of a “boy”.

In the video Bonacci tells he was repeatedly sodomised by Congressman Barney Frank.

He saw (then vice-president) George H.W. Bush at several parties.

He saw a white boy from Washington DC and a black boy from Omaha perform oral sex on Bush Sr.

He also saw the daughter of Ronald Reagan at the parties (not engaged in sex though):

Eulice “Lisa” Washington (Nelly Patterson Webb), was sexually abused from 15 years of age (1985) at parties in Washington, Chicago and New-York.

Lisa was a foster child in the family of Jarrett and Barbara Webb (related to Larry King and Jarrett was part of the board of directors of the Franklin Credit Union).

When she was underage, Lisa was put on display on a table at a party in Chicago in 1984 wearing only a negligee, when she saw George Bush Sr. pay King money, who then left the party with a nineteen year old black boy named Brent:

The best information I found on the Franklin scandal is from former FBI agent, the late Ted L. Gunderson: