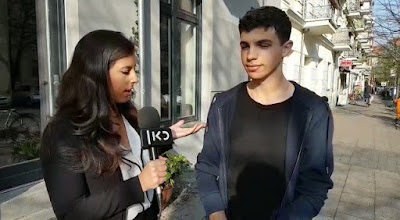 The 'anti-semitic attack' in Berlin, on 17 April 2018, appears to be an Israeli-organised False Flag?

Adam Armoush, the 'Jewish man' attacked on the Berlin street, has stated that he is not Jewish.

21-year-old Adam Armoush has told German media that he is  an Arab.

"I'm not Jewish; I'm an Israeli; I grew up in Israel in an Arab family," Adam Armoush told German broadcaster Deutsche Welle.

The 'attack' was filmed by Adam Armoush.

Armoush was slightly injured by a belt.

Armoush told Kan TV: "I knew it was important to video it."

Two Jewish organizations posted the video, which showed a young man attacking the victim while yelling "Yahudi!" or "Jew" in Arabic.

Bild daily identified the suspect as a Palestinian from Syria named Knaan S.

It's not Zionists versus fascists.

It's the feudal elite and their mafias versus the rest.

THE ROTHSCHILD CABAL - NAZIS, COMMUNISTS .
Posted by Anon at 23:31