Cambridge Analytica's Mark Turnbull has said that his company has links to certain Israelis and "people who used to work for MI5, MI6".

Executives at Cambridge Analytica have been caught on hidden camera boasting about using Ukrainian sex workers to create honey traps.

Executives at Cambridge Analytica have been caught boasting about bribing foreign political candidates and of using former intelligence agents to dig up dirt to help them blackmail politicians.

Cambridge Analytica has worked on elections in North and South America, East Asia, Africa and Europe. 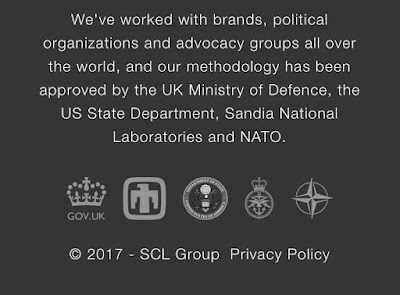 Cambridge Analytica is part of the SCL group.

At one time Michael Flynn worked for the parent company of Cambridge Analytica – SCL Group. 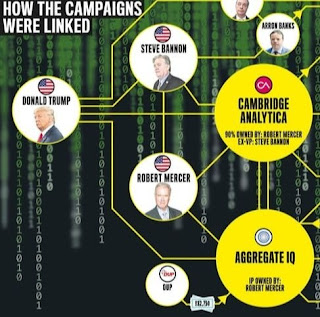 From shortly after its inception in 2005 until June 2015, the largest of the 15 shareholders of the UK Strategic Communications Laboratories Ltd. (in 2015 renamed to SCL Group) was Vincent Tchenguiz.


Tchenguiz has been involved with the Ukrainian oligarch Dmitry Firtash, who was involved with (once Trump’s campaign manager) Paul Manafort.

In March 2011, the brothers Tchenguiz were arrested for a bankruptcy fraud involving the Icelandic bank Kaupthing, for which they were acquitted.

Alfa Bank was caught communicating with a Trump server and Spectrum Health (of the DeVos family) during the US presidential campaign. 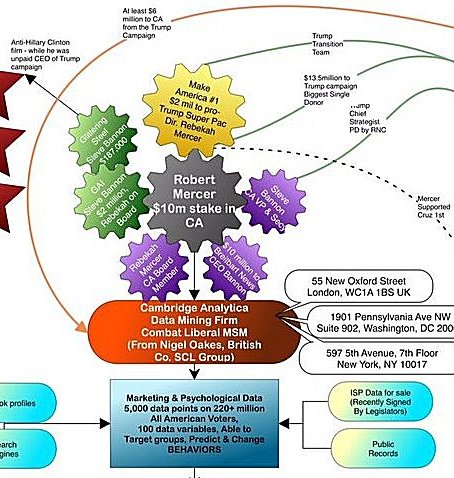 Burt has also been associated with Nat Rothschild, Rusal (of Rothschild and Oleg Deripaska) Henry Kissinger, and Libertarian Congressmen Ron and Rand Paul.

The Alfa Bank was also involved with Gazprom (also active in the Ukraine with Firtash) and (through Sibur) Rothschild agent, Trump’s Secretary of Commerce Wilbur Ross.

Cambridge Analytica has been hit by allegations that its parent company, SCL Group, tampered in an election in St Kitts and Nevis in 2010.

SCL reportedly carried out a 'sting' on Lindsay Grant, leader of the opposition in St Kitts and Nevis, when he ran against CA's client.

SCL allegedly paid a contractor £12,000 to approach Grant's election campaign, posing as an international property developer, and offer £1.07million in a cut-price deal on 200 acres of land.

The incident, at a Marriott hotel in St Kitts, was filmed on hidden cameras and released online.

Another interesting story is that Qatar was hit by a blockade shortly after it refused to provide funds to Jared Kushner.

Tillerson also got Sheldon Adelson “furious” for wanting to delay the move of the US Embassy in Israel to Jerusalem (also in the thread).