THE MISTAKES OF THE PALESTINIANS.

Occupied Palestine - WordPress.com. In 1917, there were hardly any Jews in Palestine. By 1946, Jews owned only 7 percent of Palestine.

How could the Palestinians and their fellow Arabs have successfully resisted the Zionists' invasion of their country? 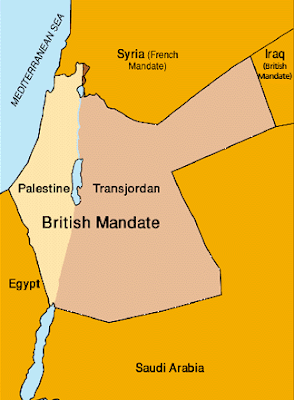 In 1917, Palestine was part of the Turkish Ottoman Empire.

After World War I, the League of nations got Britain to look after Palestine, on a temporary basis.

This was formalized by the League of Nations under the Palestine Mandate in 1923.

The Mandate reaffirmed the idea of eventually having a small Jewish state.

There was an assumption that there would eventually be a larger Palestinian state.

THE INTERNATIONAL STATUS OF THE PALESTINIAN PEOPLE, III.

The Palestinians suffered as a result of extremism. 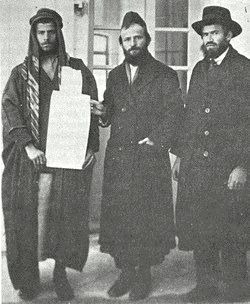 1. Rich Arabs made the 'mistake' of selling land to Jews and not looking after the displaced Palestinian tenant farmers.

Most integrated into multi-ethnic communities in the cities of Jaffa, Tiberias, and Jerusalem.

The Jewish National Fund was founded in 1904 for the purpose of buying up land from Arabs in Palestine.

At least to begin with, this was not the same as the European invasion of North America which involved the massacre of the Native American Indians.

Until 1948, there was no 'Israeli state' attacking Palestine. 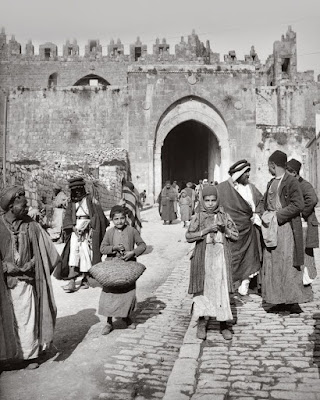 Jerusalem before the British Mandate.

Between 1919 and 1926, during the period of the British Mandate in Palestine, 90,000 Jewish immigrants arrived in Palestine.

Pogroms in Ukraine, and the rise of the Nazis, encouraged some Jews to head for Palestine.

Some of these immigrants were absorbed into Jewish communities set up on lands purchased legally by Zionist agencies from absentee Syrian and Lebanese landlords.

However, some Palestinian tenant farmers on these lands were evicted by the Jews.

The Arab National Fund, created in 1931 by wealthy Arab families to purchase land for displaced peasants, was ineffective. 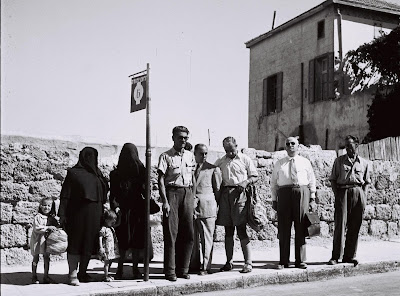 We can blame the absentee Syrian and Lebanese landlords for selling lands to the Jews.

We can blame the failure of the Arab National Fund.

The total number of evicted Arab Palestinians was small.

However, some Arab Palestinians felt threatened. 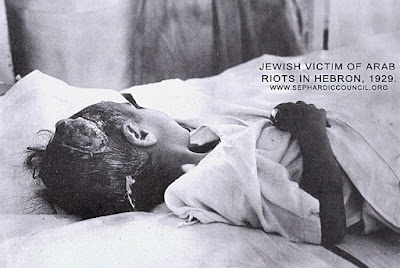 2. Arabs made the mistake of turning to violence.

The Battle of Tel Hai was fought on 1 March 1920 in the village of Tel Hai in Northern Galilee.

Joseph Trumpeldor, the commander of Jewish defenders of Tel Hai, and five co-defenders were killed.

Kamal and his comrades were searching for Frenchmen, not Jews.

The screw-up that led to Joseph Trumpeldor's death


The event is seen by some scholars as the first significant outbreak of violence, eventually leading to the Arab–Israeli conflict.

In 1946, the Jews were still heavily outnumbered by the Arabs. By 1946, Jews owned only 7 percent of Palestine.

"Dozens of British, Arab, and Jewish witnesses all reported that Arab men bearing clubs, knives, swords, and some pistols broke into Jewish buildings and murdered their inhabitants, while women followed to loot.

"They attacked Jewish pedestrians and destroyed Jewish homes and stores.

"They beat and killed Jews in their homes, including children, and in some cases split open the victims' skulls. [1]"

Herbert Samuel, British High Commissioner in Palestine at the time, stated: "This is a war of the Arab nation against the Hebrew nation" - and he suspended Jewish immigration to Palestine. 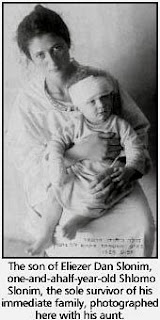 In 1929, in the Hebron massacre, sixty-seven Jews were killed by Arabs incited to violence by rumours that Jews were planning to seize control of the Temple Mount in Jerusalem. [1]

Soon after, all Hebron's Jews were evacuated by the British authorities.[4] 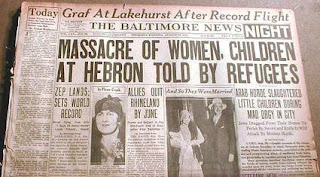 The massacre formed part of the 1929 Palestine riots, in which a total of 133 Jews and 110 Arabs were killed, and brought the centuries-old Jewish presence in Hebron to an end.

The riots took the form, in the most part, of attacks by Arabs on Jews accompanied by destruction of Jewish property.

During the week of riots from 23 to 29 August, 133 Jews were killed by Arabs, while 110 Arabs were killed, the vast majority by the British police while trying to suppress the riots.

The British-appointed Shaw Commission found that the fundamental cause of the violence "is the Arab feeling of animosity and hostility towards the Jews consequent upon the disappointment of their political and national aspirations and fear for their economic future."[11]

It also attributed the cause as being Arab fears of Jewish immigrants "not only as a menace to their livelihood but as a possible overlord of the future."[12]

The massacre, together with that of Jews in Safed, led to the re-organization and development of the Jewish paramilitary organization, the Haganah, which later became the nucleus of the Israel Defense Forces. [13] 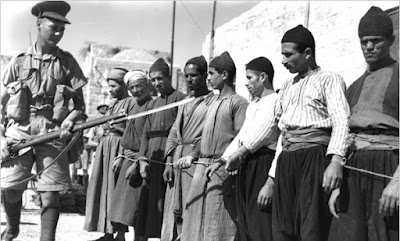 In 1934 Jerusalem's mufti, the spiritual leader of the city's Muslims, decreed that believers were duty bound to murder other Muslims who sold land to Jews.

The 1936–1939 Arab revolt in Palestine, aka "The Great Revolt", was a nationalist uprising by Palestinian Arabs in Mandatory Palestine against the British administration of the Palestine Mandate.

These nationalists demanded Arab independence and the end of the policy of open-ended Jewish immigration and land purchases with the stated goal of establishing a "Jewish National Home".[10]

In 1937, there was a violent and peasant-led resistance movement provoked by British repression in 1936[13] that increasingly targeted British forces.[12]

During this phase, the rebellion was brutally suppressed by the British Army and the Palestine Police Force using repressive measures that were intended to intimidate the Arab population and undermine popular support for the revolt.[12]

Over ten percent of the adult male Palestinian Arab population between 20 and 60 was killed, wounded, imprisoned or exiled.[14]


The Great Revolt turned the British more against the Arabs. 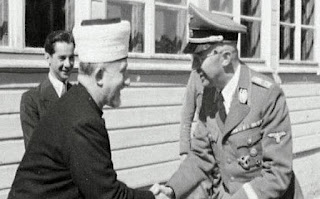 3. Some Arabs made the mistake of  turning to Hitler.

The extremist attitude of Mohammed Al-Husseini, the Grand Mufti of Jerusalem, turned the British more against the Arabs.

After the 1936–1939 Arab revolt in Palestine, al-Husseini established himself in Fascist Italy and Nazi Germany.

During World War II he collaborated with both Italy and Germany by making propagandistic radio broadcasts and by helping the Nazis recruit Bosnian Muslims for the Waffen-SS.

On meeting Adolf Hitler he requested backing for Arab independence.

Britain was thus faced with both Arab and Zionist extremism.

In May 1939 the British government released a new policy paper which sought to implement a one-state solution in Palestine.

From 1939-1948, Jewish 'terrorists' went to war with the British forces in Palestine. 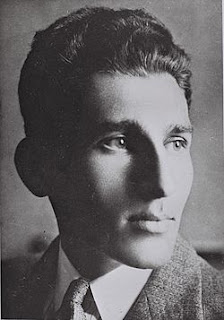 In 1940, Avraham Stern, who formed the Jewish terrorist group Lehi, proposed an alliance with Nazi Germany.

Stern offered the Germans help in conquering the Middle East and driving out the British in exchange for the establishment of a Jewish state in Palestine, which would then take in European Jewry.[14]

Jewish terrorist attacks on British assets turned many of the British against the Zionists.

In April 1948, 120 fighters from the Zionist terrorist groups Irgun and Lehi attacked Deir Yassin, a Palestinian Arab village of roughly 600 people near Jerusalem.

The Zionists boasted that 254 Palestinians were killed, including women and children.

Some were shot, while others died when hand grenades were thrown into their homes.[3]

According to a count conducted by the International Red Cross, 150 corpses were found in one cistern alone, among them people who had been either decapitated or disemboweled.[5]
Arab governments intervened five weeks later.[1]

In May 1948, the British Mandate for Palestine was ended and the Jews immediately set up the State of Israel.

This was only one of several partition plans.

4. The Arab countries made the mistake of going to war and losing land.

Hours after the end of the Mandate, contingents of the armies of four surrounding Arab states entered Palestine, setting off the 1948 Arab-Israeli War.

A combined invasion by Egypt, Jordan and Syria, together with expeditionary forces from Iraq, entered Palestine

As the war progressed, the Israeli forces gained an advantage due to a growing stream of arms and military equipment from Europe.

Many of the Israelis had fought for the British in World War II. Many of the Arabs were incompetent and corrupt.

The Arab armies were often at odds with each other, because they all wanted to steal territory from Palestine and add it to their own states.
In the following months, Israel began to expand the territory under its control.

Around 700,000 Palestinian Arabs fled or were expelled from their homes in the area that became Israel, and they became Palestinian refugees[20] in what they refer to as Al-Nakba ("the catastrophe").

In the three years following the war, about 700,000 Jews immigrated to Israel with many of them having been expelled from their previous countries of residence in the Middle East.[21]