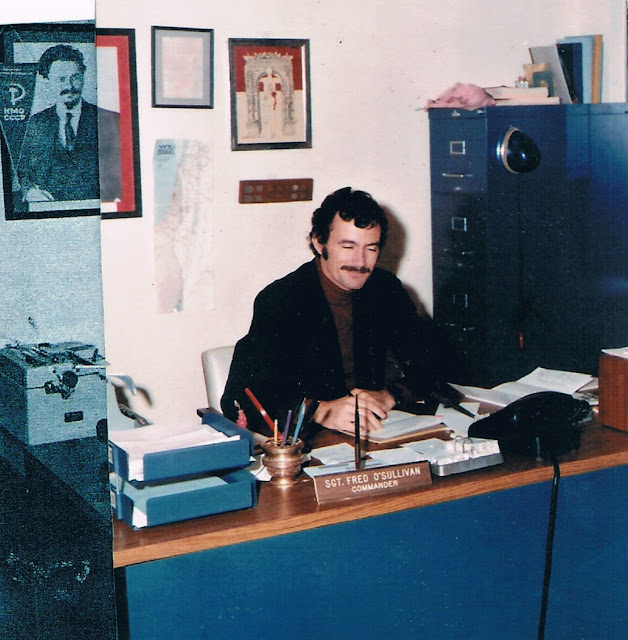 Efraim O'Sullivan at his desk as intelligence chief of the New Orleans Police Department in 1973, the year he immigrated to Israel with his family.

Efraim lived on the same street as Lee, and Efraim sat next to Lee in class at school.

In High School, Efraim tried to recruit Lee to the drill team of the Civil Air Patrol. 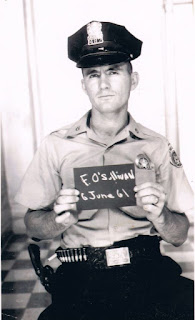 Efraim O'Sullivan as a police officer in New Orleans, June 1961.

He moved his family to Israel in 1973

He fought for Israel during the 1973 Yom Kippur War. 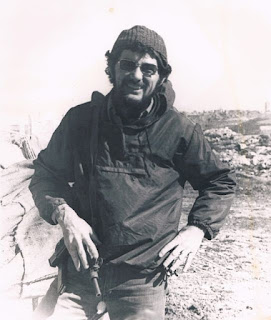 Efraim O'Sullivan fought for Israel during the 1973 Yom Kippur War.

Efraim became a policeman in Jerusalem.

He had a Lebanese driver's license with his photo but a different name.

He did work for Mossad.

He received handwritten letters thanking him for his service from Menachem Begin and Yitzhak Rabin.

He moved back to the United states and became the chief of police in Mississippi.

Both  Lee Harvie Oswald and Efraim O'Sullivan knew David Ferrie, the New Orleans man linked to the assassination of JFK.

In New Orleans, David Ferrie was an air cadet instructor.

One of his students was 15-year-old Lee Harvey Oswald.

Another was Barry Seal.

Over the years, Ferrie, while working with various cadet squadrons, developed improper relations with boys ranging in age from 14-18.

Efraim O'Sullivan first met Ferrie during his Civil Air Patrol days 'where Ferrie was like a scout master of the group.'

The following people linked to the Kennedy assassination were reportedly gay:

The Kennedy assassination is linked to boy-loving Nazis, Bilderberg, Mafia dons and various fascist oligarchs - all connected to the CIA and Mossad.

District Attorney Jim Garrison came to the conclusion that the plotters were a group of right-wingers with links to the CIA.

These included the CIA's David Ferrie and Clay Shaw.

Shaw is believed to have been one of the CIA organisers of the Kennedy assassination.

"Clay Shaw's address book had the names of pro-Nazi European royalty and people in the Bilderberg Group."

(Sherm Says: The Death of JFK: The New Orleans Connection)

At Shaw's trial for the muder of Kennedy, insurance salesman Perry Russo testified that he had attended a party at the apartment of David Ferrie.

At the party, Russo said that Ferrie, Oswald, and "Clay Bertrand" (who Russo identified in the courtroom as Clay Shaw) had discussed killing Kennedy.[6]

More from "The Death of JFK: The New Orleans Connection":

"David Ferrie was a CIA contract pilot... who was also involved in moving drugs and guns...

"At one time Barry Seal was on his payroll...

Ferrie had studied for the priesthood.

He taught aviation at St. Benedict High School, before being fired for taking boys to a house of ill fame.

He met Lee Harvey Oswald in 1955, when Oswald joined his Cadet Squadron in New Orleans.

"Jack Martin, a Ferrie friend, speculated that Ferrie could have hypnotized Oswald in some way.

"Ferrie had a substantial library on hypnotism, and the CIA later admitted that it had experimented with mind control, MKUltra.

"Ferrie was seen with Jack Ruby before the assassination, and a hypnotist was performing at the club at the time...

"Ferrie claimed to he a hypnotist and psychotherapist, and there are reports that he was indeed a capable hypnotist..."

Clay Shaw was a director of Centro Mondiale Commerciale (CMC) which "was comprised of former Italian fascists, right wing elements,CIA and Defense Department people , and representatives of the European paramilitary right."

"At one time he was president of Permindex, a trade organisation, backed by the CIA.

Clay Shaw was on the board of Permindex.

"Nagy ... provided money for the Secret Army Organization, which was to attempt the assassination of Charles De Gaulle...

"The bank was a Mossad front, and Rosenbaum purchased arms on behalf of the Mossad.

"This bank was the chief launderer for Meyer Lansky, an American gangster.

"Joseph Bonano, another gangster was also tied to Permindex.

Louis Bloomfield. In Nomenclature of an Assassination Cabal (1970)William Torbitt claims that the assassination of John F. Kennedy was organized by Bloomfield and Permindex. Also involved was the Defense Industrial Security Command, organized by J. Edgar Hoover and William Sullivan.

"He was a friend of J. Edgar Hoover. He was also closely tied to the very wealthy Bronfmans, allegedly Canada’s leading crime family.

"Using Permindex, he managed the business affairs for members of a Corsican assassin ring.

"Permindex was mainly financed by oil companies and Halliburton...

"George and Herman Brown of Brown and Root also invested in Permindex.

"Permindex and CMC most likely enjoyed profits from bringing heroin from the Golden Triangle to Europe, and it is likely that they worked with a number of intelligence services in this activity...

Carlos Marcello. Ferrie worked for Marcello and reportedly was the pilot who flew Marcello back into the United States from Guatemala after he had been deported in April 1961 as part of the U.S. Attorney General Robert Kennedy's crackdown on organized crime.

"David Ferrie was one shared employee...

"Former MI6 agent John Coleman has theorized that Permindex orchestrated the assassination, claiming they used an international squad that is used when all else fails...

"The French president’s intelligence people traced the financing of the assassination to Permindex and CMC.

"De Gaulle thought Mossad was also involved, and it had to move its operations to the Netherlands and Belgium.

"Some believe Permindex has ties to the old Nazi spy network of Otto Skorzeny...

"Shaw’s address book had the names of pro-Nazi European royalty and people in the Bildberg Group...

"Sitting next to Oswald on the bus was Albert Osborne, alias John Howard Bowen...

"Since 1934, this man , Albert Bowen-Osborne, a missionary for the American Council of Christian Churches ... had been running a school for marksmen or assassins in his orphanage in Oaxaca, Mexico.

"He was in Knoxville working for a boys club for a number of years and was fired for homosexual activities with his charges..."

In 1942 "he organized a Nazi group called the Campfire Council in Tennessee...

"Division Five of the FBI had funneled money to Oaxaca through the American Council of Christian Churches...

"It was later shown that this Bowen had ties to Clay Shaw’s CMC and to division 5 of the F.B.I.. .

"Shaw ... has been clearly tied to the CIA's Directorate of Operations..."

Garrison claimed that there was someone impersonating Oswald.

"A man claiming to be Oswald appeared in Mexico City before Oswald was there...

"There are also mysterious claims that an Oswald visited the Soviet Embassy on September 28, but it was closed that day..."

He had studied, unsuccessfully, for the priesthood.

He taught aeronautics at Cleveland's Benedictine High School but was fired after taking boys to a house of prostitution.

In New Orleans he was briefly an aerospace education instructor at Moisant Airport.

One of his students was 15-year-old Lee Harvey Oswald. (Another was Barry Seal)

Over the years, Ferrie, while working with with various cadet squadrons, developed improper relations with boys ranging in age from 14-18.

By early 1961, Ferrie was working with a CIA-backed anti-Castro group in New Orleans.

In the early 1960s, Ferrie began working with private investigator Guy Banister, formerly of the FBI.

In 1963, according to several witnesses, Ferrie and Banister worked together for lawyer G. Wray Gill, on behalf of New Orleans Mafia boss Carlos Marcello, in an attempt to block Marcello's deportation to Guatemala.

An unconfirmed Border Patrol report of February 1962 states that Ferrie was the pilot who flew Carlos Marcello back into the United States from Guatemala after he had been deported in April 1961 as part of the U.S. Attorney General Robert Kennedy's crackdown on organized crime.

On 22 November 1963, John F Kennedy was assassinated and Marcello was acquitted in his deportation case.

On the afternoon of 22 November 1963, Guy Banister was in his office with and one of his employees, Jack Martin.

The two men got into a heated argument.

According to Martin, Banister said something to which Martin replied, "What are you going to do - kill me like you all did Kennedy?"

In the days that followed, Jack Martin spoke to reporters and police.

Martin told the New Orleans police that Ferrie "was supposed to have been the getaway pilot in the assassination."

Martin also claimed that Ferrie had known Lee Harvey Oswald from their days in the New Orleans Civil Air Patrol, and that he had seen a photograph, at Ferrie's home, of Oswald in a Civil Air Patrol group.

Martin told the FBI that Ferrie may have hypnotized Oswald into assassinating Kennedy.

Martin claimed that during the summer of 1963, David Ferrie, Guy Banister and Lee Harvey Oswald worked together on anti-Castro activities.

According to testimony by Banister's personal secretary, Delphine Roberts, Ferrie and Oswald were frequent visitors to Banister's office in 1963.

She said: "I believed his work was somehow connected with the CIA."

Garrison became convinced that a group right-wingers, including Ferrie, Banister, and Clay Shaw, were involved in a conspiracy with elements of the CIA to kill John F. Kennedy.

Garrison would later claim that the motive for the assassination was anger over Kennedy's attempts to obtain a peace settlement in both Cuba and Vietnam.

Garrison also believed that Shaw, Banister, and Ferrie had conspired to set up Oswald as a patsy in the JFK assassination.

On 22 February 1967, less than a week after the story of Garrison's investigation became public, Ferrie was found dead in his apartment.

Victor Marchetti, formerly of the CIA, has claimed that David Ferrie was connected to the CIA. 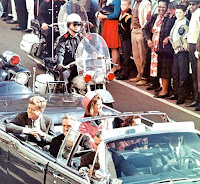 aangirfan: The Kennedy Assasination, the Pentagon, the CIA, the ...