Reportedly this picture shows Madeleine McCann, a bald man who seems to have links to the police, and Robert Murat.

Madeleine Beth McCann disappeared on the evening of 3 May 2007. 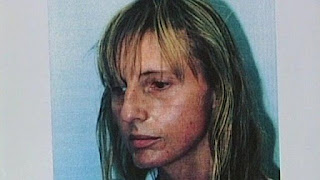 'Marc Dutroux and his wife Michelle Martin were jailed in 2004.'

But, was it their body doubles who went to prison? 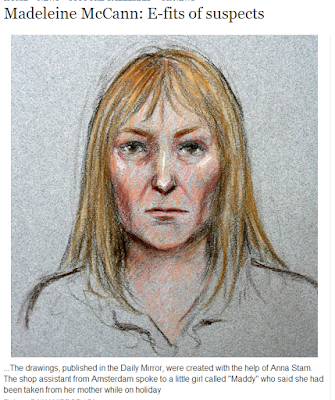 Above, we see the original Marc Dutroux, who is suspected of having worked for the security services.

The discovery of computer discs at Dutroux's house, in 1996, "unraveled an international pedophile ring involving Belgium, the Netherlands, Portugal, the U.S., Great Britain, Japan and the United Nations and its agencies. 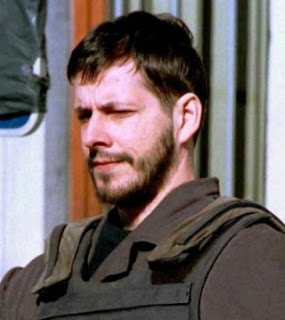 Above, we see Marc Dutroux, or his body double.

This is the 'Marc Dutroux' who appeared in court. 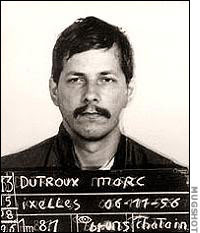 Above, we see the original Marc Dutroux, with a snub nose.

The Portuguese police were reluctant to issue the above e-fit of a Madeleine McCann suspect.

Michel Lelievre was involved in the Dutroux child kidnapping ring, which had links to the police.

Derek Flack, from Ilford in England, was on holiday in Praia da Luz, at the same time as Madeleine.

"He observed an individual who was standing at the corner of the path watching (this being the reason he found him suspicious) in the direction of the apartment that Madeleine would later disappear from.

"He adds that near to where the individual was watching, on the other side of the road, was a parked vehicle, van type, white, with a person."

According to the Telegraph (UK), 3 March 2010, in the Madeleine McCann case, there are more than 50 new leads.

In 1995 the Dutroux gang attempted to kidnap a girl in Kortrijk in Belgium.

Allegedly Michel Nihoul, the key figure in the Dutroux affair, has been linked to this incident.

Bruges, in Belgium, is also linked to the Dutroux affair.

1. Repeated sightings of a girl who looked like Madeleine in Ghent, Kortrijk and Bruges in Belgium in November 2008.

2. Photographs from the internet discovered by a French detective showing images of sexual abuse which involved a girl looking like Madeleine.

In March 2008, intelligence received by the UK Police suggested there was an organised child abduction ring from Belgium which had Madeleine stolen to order.

In Belgium there have been over 100 witness reports linked to Madeleine through a hotline for missing children.

A child therapist said she was "100 per cent sure" she saw Madeleine at a restaurant in the Belgian town of Tongeren, on July 28 2007. 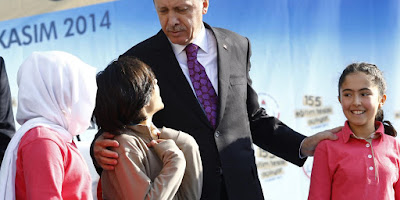 On 4 May, 'Jean-Michel Nihoul, of the Dutroux gang, was released from jail.' 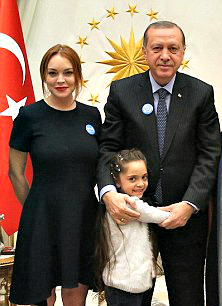 Above, we see Sabine Dardenne, who escaped from the Dutroux gang. 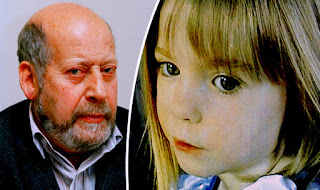 The well connected Jewish politician Sir Clement Freud has now been publicly linked to the disappearance of Madeleine McCann. 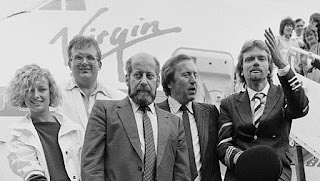 Clement Freud is related, on his mother's side, to Uri Geller.

Geller has been photographed with a surprisingly large number of the reported top UK child abusers.

This could suggest that Kate and Gerry knew about the high powered pedophile rings that supply children to the various top people that have been attracted to the Algarve.

But Kate and Gerry had assumed that these rings would not touch the children of middle class English tourists.

Or, the McCanns were friends with some dubious characters, but, had assumed that these people would not kidnap Madeleine?

David James Smith, in The Sunday Times (UK), 16 December 2007, (Kate and Gerry McCann: Beyond the smears) wrote about the Madeleine McCann case:

"I heard that a PJ officer had been surprised to find a member of MI5 at a UK meeting about the case, and this made him suspicious that shadowy forces could be at work.

"The Sol journalist Felicia Cabrita mentioned the 'mysterious Clarence' - Clarence Mitchell, the former government PR officer turned McCann spokesman - and I was told there was suspicion too about another government official, Sheree Dodd, who had acted as a PR officer for the McCanns briefly in the early days..."

MADELEINE, HALLIGEN AND OTHER SPOOKS