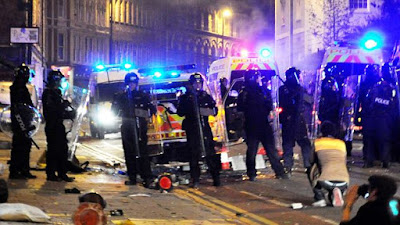 Where is the best place to live?

It may depend on your personality. 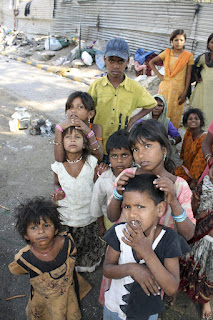 Denver, Colorado, is the best place to live in America, according to U.S. News & World Report.

Bristol has been named the best place to live in Britain in 2017.

But, the deaths of three men in Bristol have sparked serial killer fears. 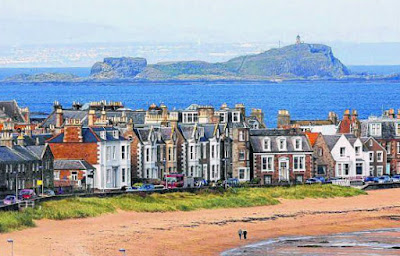 North Berwick has been named as the best place to live in Scotland. 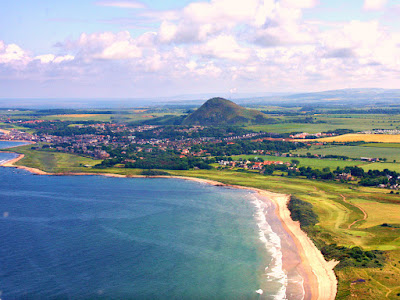 You have to be rich to live in North Berwick (above). 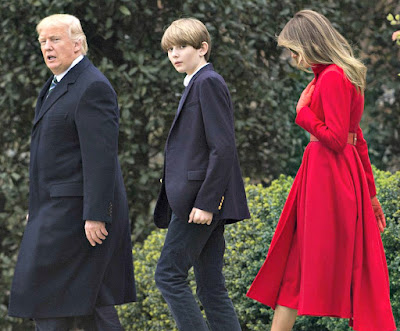 Donald Trump likes to spend lots of time in Florida. 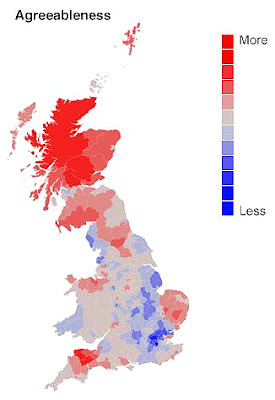 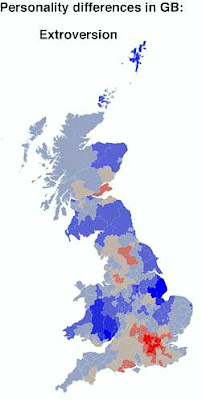 
A study has found "Britain's most extroverted, agreeable and emotionally stable regions".


Agreeableness means traits such as cooperation, friendliness and trust.

A survey of almost 400,000 British residents shows Scots to be amongst the friendliest and most co-operative residents, Londoners the most open and Welsh people the least emotionally stable. 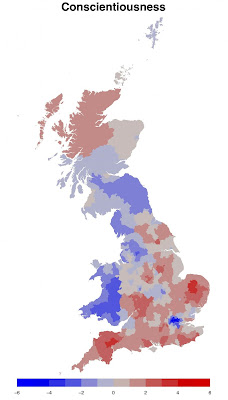 "The most conscientious regions were in Southern England, pockets of the Midlands, and the Scottish Highlands, suggesting that large proportions of residents of these areas were self-disciplined, cautious, and compliant.

"London, Wales, and parts of the North of England showed significantly lower levels, suggesting that comparatively large proportions of residents of these areas were disorderly, rebellious, and indifferent.

"Conscientiousness individuals were more likely to be married, older and on a higher income, with lower rates of deaths from cancer and heart disease." 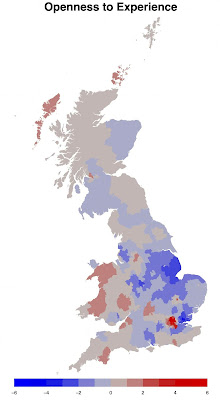 "Metropolitan areas tended to show greater Openness appeared mainly in metropolitan areas, with London, Oxford, Cambridge, Brighton, Bristol, Manchester and Glasgow, but also in parts of Wales, indicating that a disproportion number of residents of these areas were creative, unconventional, and curious.

"Significantly low levels of Openness emerged throughout most of the East Midlands and East of England, suggesting that large proportions of residents of these areas were conventional, down-to-earth, and traditional." 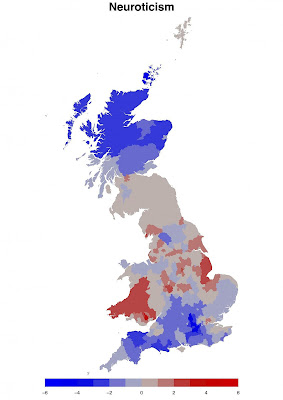 "People were more likely to be emotionally stable in the South West and much of Southern England, as well as across most of Scotland, suggesting that residents of these areas tend to be calm, relaxed, and happy.

"Overall, the survey found that regions with large proportions of people scoring low in emotional stability had more residents who were working class and physically unhealthy."


The highest and lowest personality scores by GB area

What about the USA? 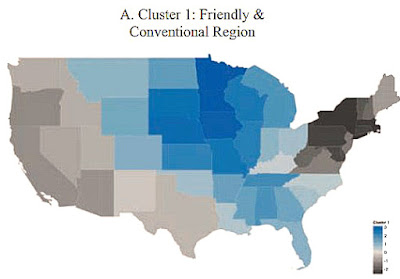 People who live in friendly and conventional states like Minnesota and South Dakota (blue) are poorer, less educated, more conservative. 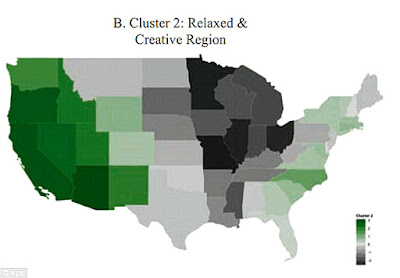 Americans who reside in relaxed and creative states, such as California and Oregon (green), are more ethnically and culturally diverse. 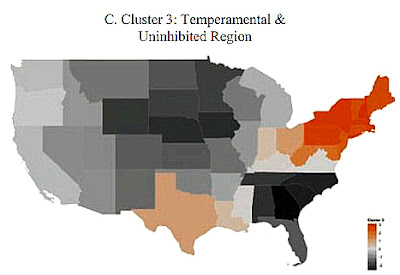 The temperamental and uninhibited portion of the U.S., which includes New York and Massachusetts (red), has more women and people who are wealthier