A NEW AMERICA - 'PERON' TAKES OVER

Trump reminds you of Juan Domingo? 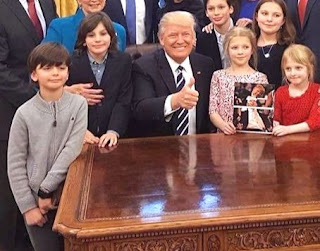 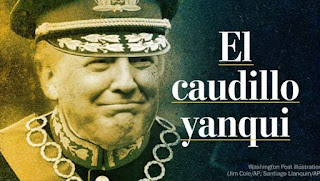 'Bello' sees Trump as being a Peronist on the Potomac

"A PRESIDENT is swept into office after whipping up a wave of grievance and resentment.

"He claims to represent 'the people' against internal exploiters and external threats.

"He purports to 'refound' the nation, and damns those who preceded him. 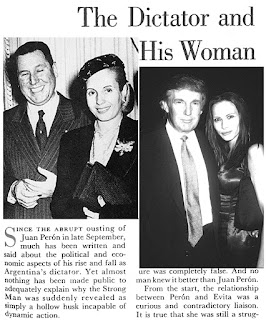 "He governs though confrontation and polarisation.

"His language is aggressive - opponents are branded as enemies or traitors.

"He uses the media to cement his connection with the masses, while bridling at critical journalism and at rebuffs to executive power.

"His policies focus on bringing short-term benefits to his political base - hang the long-term cost to the country's economic stability.

"Yes, but these traits come straight from the manual of Latin American populist nationalism." 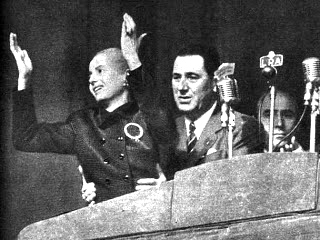 1. The Perons are said to have looted Argentina.

2. In the early 20th century, before Peron came along, Argentina was one of the top 10 richest countries in the world.

3. Peron was sympathetic to homosexuals.

6. Reportedly, Peron had links to the CIA through Licio Gelli. 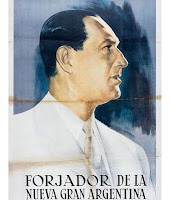 7. Trump is popular with the Americans who are fascists.

https://www.washingtonpost.com/.../trump-is-the-u-s-s-first-latin-american-president/
Jan 26, 2017 - In his first week in power, President Trump has ruled by fiat and tweet, ... Argentina's JuanPerón, a populist nationalist who transformed his ...

Will Donald Trump Be America's Own Juan Perón? - The Daily Beast


Jan 22, 2017 - He managed to be all things to all people, or at least most things to many people who projected their aspirations onto him. A pragmatic ... 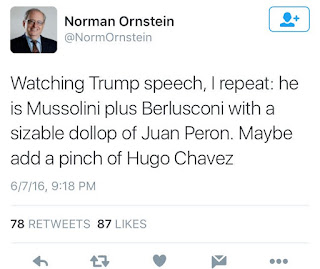 
Nov 3, 2016 - Donald Trump supporters believe that he is what America needs to avoid ... Juan DomingoPerón branded his opponents as unpatriotic; ...


Sep 29, 2016 - Donald Trump's appeal is textbook Latin American populism. ... populism in its most dangerous form is exemplified by the reign of Juan Perón ...

https://www.quora.com/Is-Donald-Trump-a-modern-American-version-of-Juan-Peron
The role of the state is much different between the two. Also, Trump is still talking about Capitalism, there is no hybrid being proposed with Communism.


Jan 18, 2017 - Today, we're looking at Perón as a model for a Trump presidency. But before we return to politics, we will mention that this is a big day for us.