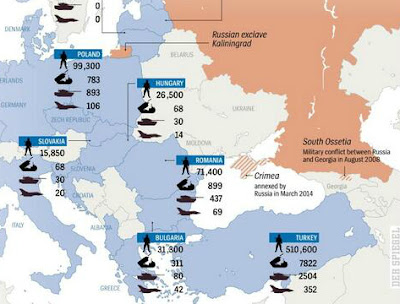 Polish journalist Konrad Stachnio reports that 2 million illegal military weapons are in the process of being smuggled from Ukraine into Poland and the EU.

This is with the apparent collusion of a corrupt Polish government which is serving NATO agents of chaos.

According to Stachnio, and French journalist Thierry Meyssan, in the Ukraine neo-Nazis and violent Islamists have formed an alliance based on common hatred of Russia.

Many Muslim migrants and Ukrainian migrants have recently moved into Eastern Europe.

Are the Nazis and ISIS forces going to be used to (1) attack Russia (2) and/or carry out a strategy of tension in Europe to keep the right-wing elite in power (3) and/or make money from mafia activities?