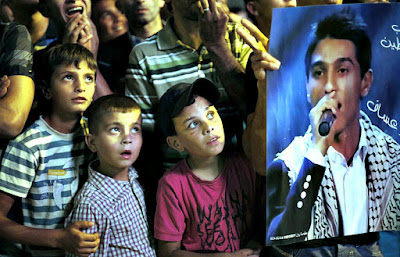 
Assaf lived in the Khan Yunis Refugee Camp in Gaza.

He began singing aged five and, by his teens, was working at weddings and local festivities.

Assaf decided to travel to Cairo to enter Arab Idol.

He bought a forged visa.

He kept clear of  Hamas's mad religious police, who disapprove of music.

At the border with Egypt, he spent time pleading with Egyptian soldiers to let him cross.

When he reached the Cairo hotel where auditions were being held, he discovered that the hotel had locked its doors.

No more contestants were allowed.

Assaf climbed the hotel's wall and found his way to the auditions.

He was too late to get an entrant's pass for the competition, so he sat in the corridor and sang.

Another contestant heard him and said, "I know I won't reach the final, but you will."

A film has been made about Mohammed Assaf.