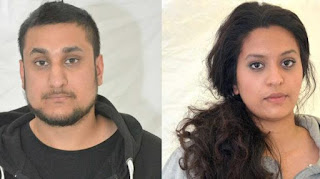 Sana Khan and her husband Mohammed Rehman (above) reportedly plotted to bomb the Westfield Shopping Centre in London.

Sana Khan is the daughter of a middle-class Justice of the Peace, Saleen Ahmed Khan.

Sana Khan was employed by Aldryngton and Early primary school.

Sana Khan has a degree in English literature, from Greenwich University.

Sana Khan "has a history of debt and drug taking".

Sana Khan is described as being mild-mannered.

Sana might just be the sort of person whom the security services could manipulate into becoming a patsy for a false flag attack.

Sana is alleged to have read the ISIS publication Dabiq, which reportedly produced by the CIA and Mossad.

The Westfield bomb plot was uncovered "when Mohammed Rehman posted a message on Twitter, asking for advice on a potential target." 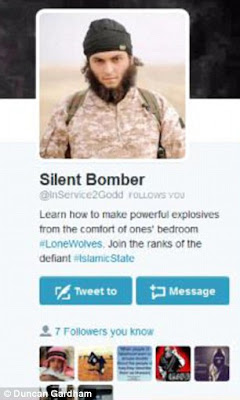 Mohammed Rehman advertised to GCHQ that he supported the Mossad-CIA's ISIS.

She was a Justice of the Peace and a school governor at the Church of England school attended by Sana.

The family owned two Mercedes cars and a Toyota Yaris.

The Khan family are a 'multi-religious family' - a mixture of Christian, Hindu and Moslem.

Sana's husband Mohammed Rehman is said to have bought explosives on e-bay and tested them in his garden.

His script appears to have been written by Mossad and its friends.

"On his first Twitter account, SilentBomber@InService2God, Rehman posted a picture of an explosion, adding: 'Not bad for an amateur LOL...'

"Rehman even boasted: 'I'm on a watch list already, what can the Met do? LMAO [laugh my arse off].' 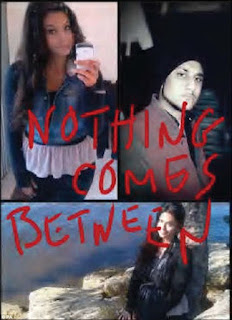 "Rehman posted a link to a video on Youtube of the suicide video made by Shehzad Tanweer, one of the July 7 bombers, adding: 'My beloved predecessor.'

(Most Moslems would know that Tanweer had links to the security services and that the July 7 bombings were an inside job?)

According to his lawyer, Mohammed Rehman is a 'pathetic drug user' who spent his time playing video games.

In police interviews, Mohammed Rehman said he wanted to go to prison and 'get a roof over my head.'

Mohammed Rehman had a 'very bad' cocaine habit, and 'drank alchol and messed around with girls'.

Mohammed Rehman was un-Islamic, according to his older brother, Shaukat.

Mohammed Rehman's sister told the court that she had filled two black bin bags with empty beer cans and emptied a waste bin of vomit from his bedroom.