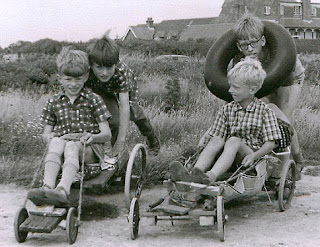 The children on the covers of some of the Enid Blyton books are the children of her illustrator, Mary Gernat. 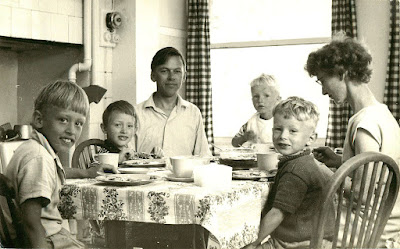 Mary Gernat used her sons Roger, Francis, Nicholas and Justin for the illustrations in the Famous Five and Secret Seven stories. 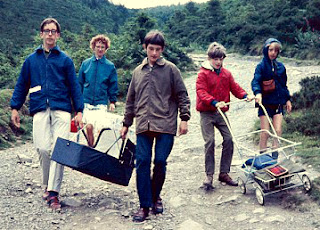 Above, we see Mary Gernat and her children. 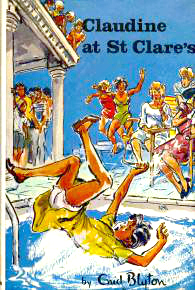 Enid Blyton's husband Hugh Pollock once found Enid locked in the bathroom with another woman.

Hugh Pollock became a secret alcoholic. Pollock entered into a relationship with Ida Crowe. Blyton began a series of affairs, including a lesbian relationship with one of the children's nannies.[97][98]. Blyton divorced Pollock and married met Kenneth Fraser Darrell Waters, a London surgeon. 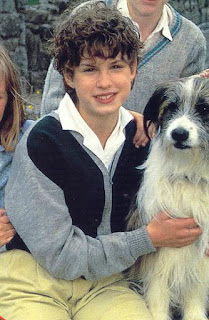 Above we see the Enid Blyton character called George.

George is a girl. 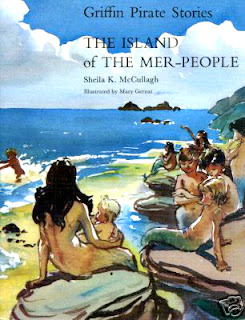 Mary Gernat lived and worked in Lymington and illustrated over one hundred and twenty book covers for authors such as Enid Blyton, Monica Edwards, Richmal Crompton, Captain W. E. Johns, Frank Richards and the Pullein-Thompson sisters.

At the static void, we read: Was Enid Blyton a Servant of Satan?
"In The Famous Five series one of the child characters is named ‘Dick’, and an adult character is called ‘Fanny’.

"Americans may associate ‘fanny’ with ‘buttocks’.

"In the rest of the English speaking world however ‘fanny’ refers to the female sex organ.

"‘Dick’, I assume is universally recognised by anglophones.

"So here we have two characters, in series of books for young primary school children, named after the female and male genitalia. 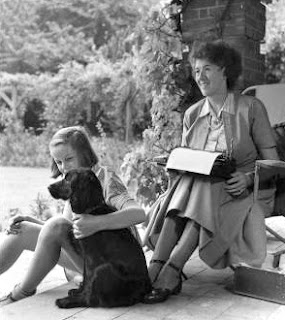 "Did Ms. BLYTon know of this at the time?
"According to the Online Etymology Dictionary, ‘fanny’ came to mean vulva in 1879.

"Likewise, ‘dick’ has had impure connotations since 1891.

"Ms Blyton, having been born in 1897 should have known, thus we can only assume that this was her intent all along – to have children uttering filthy words, all over the world in their bedrooms."

Some some later editions have been altered.
The Faraway Tree's Dame Slap, who made regular use of corporal punishment, was changed to Dame Snap who no longer did so.
The names of Dick and Fanny in the same series were changed to Rick and Frannie.[150]
Characters in the Malory Towers and St. Clare's series are no longer spanked or threatened with a spanking, but are instead scolded.
References to George's short hair making her look like a boy were removed in revisions to Five on a Hike Together, reflecting the idea that girls need not have long hair to be considered feminine or normal.[151]

In The Mail, we learn that Enid Blyton did not like her mother.
(Enid Blyton as a barking-mad adulterous bully)

"The first husband didn't work out, so she scrubbed him out.

"Emotionally, Blyton remained a little girl, stuck in a world of picnics, secret-society codes and midnight feasts. It acted as a huge comfort blanket.

"Many of Blyton's obsessions can be traced to her father, who left her mother when Enid was 12. She then seized up emotionally and physically."

Blyton's daughter Imogen Smallwood says: 'My mother was arrogant, insecure and without a trace of maternal instinct. Her approach to life was childlike, and she could be spiteful, like a teenager.' 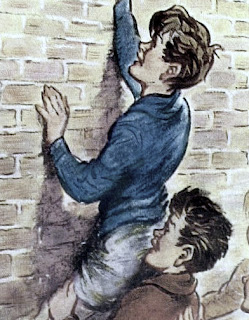 A BBC drama "shows Blyton's flirtatiousness - she entertained servicemen to dinner at the house while her husband was away at war and found them and their attention attractive...
"Directors chose to omit some aspects of Blyton's apparently sensual side, such as visitors arriving to find her playing tennis naked and suggestions of a lesbian affair with her children's nanny, Dorothy Richards."

Enid Blyton is the UK's best-loved writer, according to a survey conducted for the Costa Book Awards. (Blyton voted 'most loved writer')

Blyton, who wrote the Famous Five series and the Noddy books, has sold more than 600 million books worldwide. 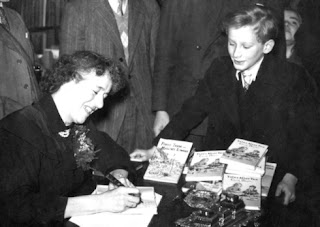 Ask an average ten year-old to write an adventure story and it might read something like this:

"Four children go to stay in an old house at the coast. They make tree houses. They ride bikes and have picnics and go swimming. They find some dark caves with secret passages.

"They take a boat out to a mysterious island. They are captured by smugglers. Without any help from adults, they escape from their incompetent and silly captors and tell their story to the grateful police."

The vocabulary is simple. The story is simple. The prose is child-like. There are no boring descriptions of people or scenery, but there are some details of things like tree houses and picnics and caves.

Blyton has been accused by the horrid PC world of being racist, sexist and snobbish.

But, note well that Blyton's books do not encourage kids to overdose on heroin or commit gang rape. 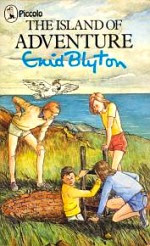 Let's take THE ISLAND OF ADVENTURE as an example.

Chapter 1 The Beginning of Things.

A young boy called Philip normally lives with his impatient Aunt, his non-child-loving Uncle, his sister Dinah, and a "stupid" black servant, at a house on the coast called Craggy Tops.

But during the summer holidays Philip, is getting extra tuition at the home of one of his teachers, a Mr Roy.

While staying with Mr Roy, Philip makes friends with a boy called Jack and his sister Lucy-Ann. Jack and Lucy-Ann are looked after by an uncle.

Note that the children do not have straighforward family backgrounds. Blyton's parents were divorced, and she herself got divorced.

As there were only four boys to coach, Mr Roy gives them each individual attention.

Philip tells Lucy-Anne that Craggy Tops is "wild" and "queer".

Philip takes a hedgehog out of his pocket. "It was a baby one, whose prickles were not yet hardened.

Observe that the Blyton world was a world free of child abusers and serial killers. Instead it was a world of harmless teachers and hedgehogs in pockets.

Did you know that hedgehogs are bisexual? 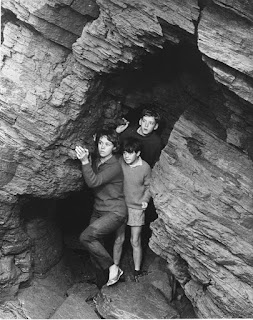 Chapter 3. Two Letters and a Plan.

"Uncle doesn't want us back," says Jack. Philip decides that Jack and Lucy-Ann should escape with them to Craggy Tops.

As you can see, the children do some pretty risky things, but nothing cruel and nasty.

The children arrive at Craggy Tops.

There has still been no violence! 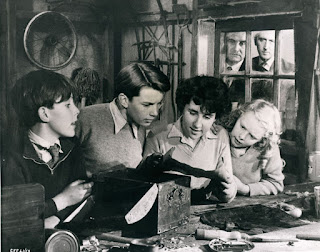 Chapter 5. Settling in at Craggy Tops.

"Lucy-Ann wished she was sleeping nearer to Jack."

Isn't she sweet and innocent.

"It was a queer place to sleep for the first time at Craggy tops."

Jack shares a mattress with Philip.

"Jack soon got warm, cuddled up against Philip's back."

The children explore the damp dark caves, some of which have "queerholes in their roofs."

"She had certainly meant to give philip a hard blow."

Philip falls into a hole.

What would Freud think? 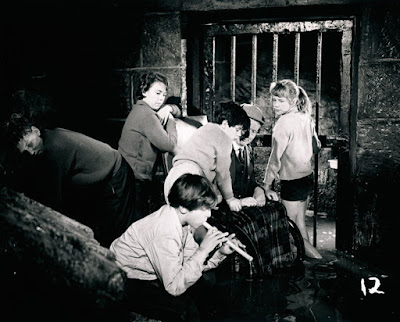 Chapter 8 . In the Cellars.

A secret passage is discovered.

Philip - "Even when he was wearing bathing-drawers he seemed able to secrete some kind of creature about his body.

"Yesterday it had been a couple of friendly crabs. But when he had accidentally sat down on one, and it had nipped him....."

Is this why kids love Blyton?

The black servant is involved in some dark doings.
Chapter 11. Bill Smuggs.

The four children visit a cove.

"The children slipped off their jerseys and shorts and went into the water to bathe."

They spy a boat.

"What a queer place to keep a boat, " says Philip.

Is the pace too fast? Are you embarrased by the strip-tease?

I won't describe all 29 chapters, as I'm sure you've got the idea.

Blyton is gentle innocent fun for both adults and children.

Vladimir Nabokov wrote Lolita.
What do we know about the real Nabokov?

2. Some quotes from Nabokov’s novel ‘Pale Fire’:
"When he was a dark strong lad of thirteen ... he had several dear playmates but none could compete with Oleg, Duke of Rahl.

"Both lads were handsome, long-legged specimens of Varangian boyhood... Oleg ... stripped and shiny in the mist of the bath house, his bold virilia...

"Oleg walked in front : his shapely buttocks encased in tight indigo cotton moved alertly, and his own erect radiance, rather than his flambeau, seemed to illume with leaps of light the low ceiling and crowding walls.
"Behind him the young Prince’s electric torch played on the ground and gave a coating of flower to the back of Oleg’s bare thighs... smooth entrance ..."

"You’re all chalky behind," said the young Prince ... Both were in a manly state and moaning like doves...
"He inhaled the hair oil of the pretty page who had bent to brush a rose petal off the footstool...

"Gordon ... A slender but strong-looking lad of fourteen or fifteen dyed a nectarine hue by the sun. He had nothing on save a leopard-spotted loincloth...
The graceful boy wreathed about the loins with ivy...
"The boy wiped his wet hands on his black bathing trunks...
The boy striking his flanks clothed in white tennis shorts... The young woodwose had closed his eyes and was stretched out supine on the pool’s marble margin; his Tarzan brief had ben cast aside on the turf..."

3. In the 1950s Nabokov wrote Lolita. For six months it was the number one bestseller in America.
Nabokov liked girls, so long as they looked like boys.

Lolita was the girl with the ‘puerile (boy) hips’, the girl wearing ‘shorts’.

In Pale Fire, the commentator appears to be Charles Kinbote.

But, Nabokov reveals in his diary that the commentator is Prof. Vseslav Botkin, a Russian and an academic.

Nabokov was Russian and an academic.

"Reality is neither the subject nor the object of true art which creates its own special reality having nothing to do with the average ‘reality’ perceived by the communal eye."