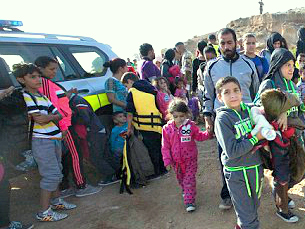 Two boats carrying 120 people, presumed to be Syrians, have managed to land at the Akrotiri British military base on the coast of Cyprus.

A source on Cyprus has accused the UK Ministry of Defence of allowing the boats to reach the base 'unchallenged' and raised fears they could have been ISIS terrorists.

The source told Sky News: 'What if the landing had been of a smaller scale and by members of ISIS, seeking to attack?

'If the MoD can't detect and intercept refugees, there would appear to be a significant vulnerability as yet unaddressed at a time when security and defence are apparently at the fore of the Conservative government agenda.'

Britain has been using its Akrotiri base to bomb Syria.

It was initially reported that four boats had arrived on Cyprus.

John explains that he is on a mission involving ISIS.

I ask if the mission will be dangerous.

"Well," says John, "We are not actually going to be leaving Cyprus.

John relates that a film crew will capture the moment that a Chinook helicopter lands and SAS troops rush towards a building...