'GORBACHEV IS A BRITISH AGENT'

Professor Igor Panarin (above) says that Nikita Khrushchev (Soviet leader 1953-1964) and Mikhail Gorbachev (1985-1991) were steered to power by British Intelligence.

Mikhail Gorbachev 'was awarded the Nobel Peace Prize in 1990 for ending both the Cold war and ending the Soviet Union'.

Mikhail Gorbachev was born into a mixed Russian-Ukrainian family.

He wrote that "In that terrible year (in 1933) nearly half the population of my native village, Privolnoye, starved to death, including two sisters and one brother of my father."[6]

Both of his grandfathers were arrested on false charges in the 1930s; his paternal grandfather Andrey Moiseyevich Gorbachev was sent to exile in Siberia.[7][8]

Thus, Gorbachev might have been the sort of person who could have been recruited to the British secret service.

Could elements of the British secret service be working for the global elite, the Jewish mafia or the Rothschilds?

'Tamara', at henrymakow.com, writes that  real name of Mikahail Gorbachev is Mikhail Garber.

"His mother is Maria Gopkalo and his grandfather is Andrei Moiseevich Gorbachev, both Jews."

"Mikhail Gorbachev and the Plunder of the USSR".

"In his early career as a local communist leader in Stavropol, Gorbachev was known for collecting bribes in envelopes...

"According to Professor Igor Panarin the collapse of the USSR was an inside job of British intelligence and Zbigniew Brzezinski...

"Gorbachev was a key person in British and American Secret Service operations..."

"Mikhail Gorbachev and the Plunder of the USSR" 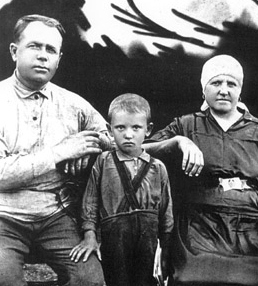 Mikhail Gorbachev with his grandparents Pantelei and Vasilisa.1941. Gorbachev was once a handsome youth. Did that help his career?

There is a belief that Jewish gangsters have been very powerful within Russia (and elsewhere) for many decades.

During the Yeltsin era, the Russian government allegedly allowed certain Jewish gangsters to steal a lot of Russia's wealth.

The newspaper Scotland on Sunday reported, on 16/9/ 2001, that Osama bin Laden made his fortune in part by working with Jewish-Russian mafia operations in Qatar and Cyprus.

According to Wayne Madsen, "The Bin Laden drug network ... intersects with Geneva-based financial entities established by George H. W. Bush while he was CIA director and Vice President and President of the United States." -

James Angleton, who was of the pro-Israel faction in the CIA. He was head of Counter Intelligence at the CIA from 1954 - 1975.

(DO JEWS RUN THE SECURITY SERVICES?)

Philby, friend of Rothschild, MI6, the CIA, the KGB and MOSSAD.

The British secret agent Kim Philby was a friend of Victor Rothschild.

In 1943 James Angleton was sent to London to be trained by MI5 officer Kim Philby, who turned out to be a friend of the KGB and Mossad.

In 1951 Angleton was sent to Israel where he helped to set up Mossad.

According to Eustace Mullins (CHAPTER FIVE - The CIA - 3):

While CIA station chief in Rome, the CIA's Angleton "worked closely with the Zionist terrorists Teddy Kollek and Jacob Meridor, and later became chief of the Israeli desk at the CIA, helping Philby to set up the lavishly funded international Mossad espionage operation, all paid for by American taxpayers."

In 1973, James Schlesinger temporarily became Director of the CIA.

Angleton gave Schlesinger a list of people that he thought were Soviet agents.

Averell Harriman, the former U.S. ambassador to the Soviet Union,

Of course, Gorbachev may be being unfairly got at when he is accused of being a traitor.

It may be that in 1989 both Reagan and Gorbachev genuinely wanted a permanent end to the Cold War.

It may be that a certain faction of the elite wanted to frustrate the attempt to bring about peace and friendship.

..
Samantha Smith in camp Artek in the Crimea.

In 1984, Samantha hosted a children's special for the Disney Channelentitled Samantha Smith Goes To Washington.

It is quite likely that Samantha was assassinated.

Child abuse rings are part of the story of the Cold War.

TORONTO, AZOV FILMS AND THE SPIES

AZOV FILMS AND THE CIA

Fukushima World: The Death of Us
Posted by Anon at 23:48