Top Jew Dominic Lawson, who is linked to MI6 and Princess Diana.

From the increasingly disgusting Daily Mail:

DOMINIC LAWSON: We should stop wasting our money on fantasies about VIP abusers murdering our children .

The Daily Mail states: "Sorry we are not currently accepting comments on this article."

KEVIN ALLEN ‏@KeviboyAllen  21h21 hours ago
@DailyMailUK you filthy scumbags don't bother EVER contacting me! I don't want you reporting anything about MARTIN ALLEN! speak to my brief!
View conversation12 retweets9 favourites

Dominic Lawson was born into an influential Jewish family.

Lawson is married to the The Honourable Rosamond Mary Monckton, who was 'close' to Lady Diana.

Rosa’s brother, the Honourable Anthony Monckton, a diplomat, has also been an MI6 spy according to Tomlinson. 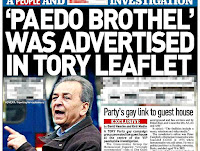 Reportedly, Anthony and Rosa's grandfather worked for Edward VIII and kept a close watch on him for the security services.

(MI6 & The Lying Game: Rosa Monckton and the Oxbridge spooks.)

So, the Daily Mail may be heavily infiltrated by Jewish spooks whose job it is to cover up the use of child abuse rings by Mossad, MI6, MI5, the CIA and their friends.