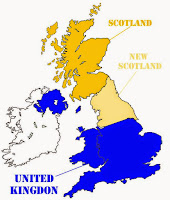 "Tens of thousands of people are backing a campaign to make the North of England part of Scotland.

"The hashtag #TakeUsWithYouScotland has been used more than 24,000 times on Twitter.

"And a petition backing the move to take northern cities under the control of the Scots has more than 16,000 signatures.

"'New Scotland' would see Newcastle, Manchester, Liverpool, Leeds, and every other northern community ruled from Edinburgh instead of London."

Northerners back bid to unite with future independent Scotland

Email ThisBlogThis!Share to TwitterShare to FacebookShare to Pinterest
Labels: North of England, Scotland, Take Us With You