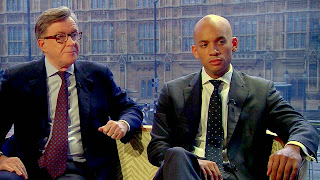 'Britain's Obama', spooky Chuka Umunna (right), with his pal Peter Mandelson, a friend of the Rothschilds.

After the May 2015 UK election, we learn that Chuka Umunna might become the leader of the UK's Labour Party.

Chuka Umunna is ordained by the top Jew Peter Mandelson as next Labour leader.

Chuka's father was a Nigerian. His mother is the daughter of an officer of MI5.

Chuka used the name Harrison when writing on a social network website.

On this site he came across as being a 'champagne socialist'.

Chuka Umunna is being groomed by the Jews to become Britain's Obama. / Internet secrets of 'jetrosexual' Chuka Umunna 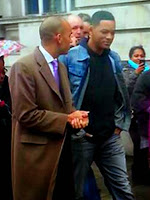 Chuka with Will Smith

Chuka Harrison Umunna comes from Streatham and currently he is is the Member of Parliament for Streatham.

Reportedly, an officer in UK intelligence and two senior police officers were part of this child abuse ring.

Chuka's mother Patricia is the daughter of Sir Helenus Milmo, QC, former High Court judge, who formed part of the prosecution team at the Nuremberg Trials.

Helenus Milmo was an officer in MI5 at a time when it was under the influence of Lord Victor Rothschild.

Helenus Milmo worked for Kim Philby, an MI5 traitor who was very close to Rothschild.

Milmo was selected to investigate Philby in 1951.

Chuka Umunna has received the endorsement of Tony Blair.

Janan Ganesh of the Financial Times described Chuka as "the man Tories fear most".[40]